Well the days have been eventful and interesting. Korea is a nice change from the tropics, a little cleaner and not so humid. Unfortuneately my camera batteries ran out on the third day I was here. But I managed to find an adaptor and can start taking photos again from tomorrow. I also had a few issues uploading images onto net cafe computers. Here are the photos from Friday and the weekend. 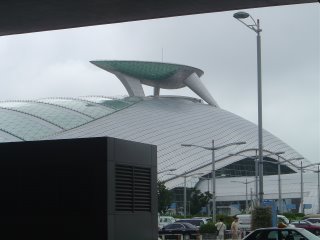 I arrived in Seoul at about 9am local time last Friday. I didn't manage to sleep much on the plane, but was feeling alright when I passed through Korean immigration. This is part of Incheon Airport. 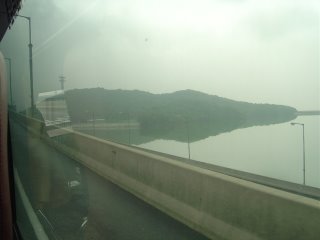 The airport is located on a separate island to the Korean peninsula and the best way to get into Seoul is via the Airport Limousine, an express bus service that takes you to key points in the capital. Here's a view of some of the marshlands that you see during that journey. 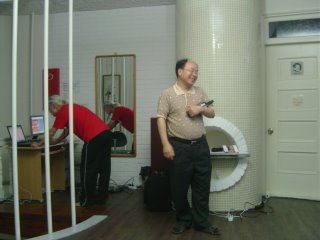 I booked into the Koroot guesthouse for the first seven days that I'm staying in Seoul. This is a lodging place for Korean adoptees run by volunteers and the house itself was donated by a benefactor. A whole bunch of adoptees stay here, coming and going all the time. Here's the main guy that runs the place, Mr Kim. He's happy because I just gave him a bottle of McClaren Vale shiraz and he loves red wine. I don't know how you can love red wine in Korea, because the only stuff I've tried here tastes more like balsamic vinegar. Maybe it was balsamic vinegar with the wrong label. 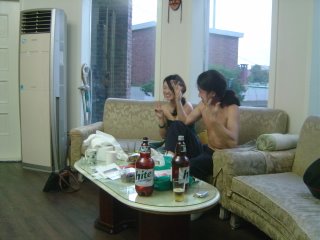 Here are some housemates that I met on the first day. Maria on the left is from Denmark and Eric on the right is from France. Everyone here is pretty friendly and there are also volunteers that visit each day to help you out with stuff, like finding a mobile phone and guiding you around the city. 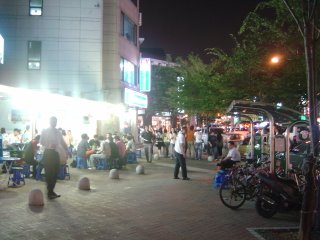 We went out to eat that night in an area called Hongdae. The nightlife in Korea is busy and vibrant, with plenty of places to eat at. 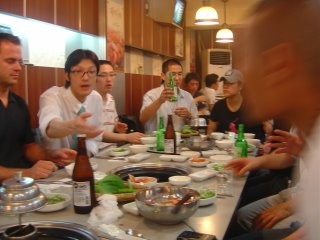 We met up with a bunch of people for dinner and had Korean BBQ where you cook your own food at your table. That's probably the most popular kind of restaurant here and really enjoyable because it gives you something to do while you talk. It's also pretty cheap. On the table you can see green bottles of soju. Soju is a rice wine that has a habit of creeping up on you, slapping you around a bit and leaving you in a gutter somewhere. You can buy it from corner stores for only a little more than AUD$1 per bottle. You can buy lemon, pineapple and peach flavoured soju as well. 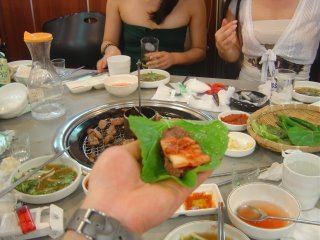 And this is how you eat BBQ at these places. You cook the meat and pack it into a leaf along with whatever side dishes you like. Then you wrap it up and dip it in sauce. It's really good and somewhat different from the Korean BBQ places back in Australia. 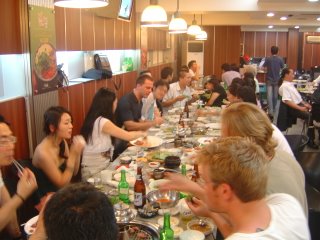 The great thing about big international cities is that there are so many other travellers that you bump into. The people on our table that night were from many different countries but everyone spoke English and got along well. 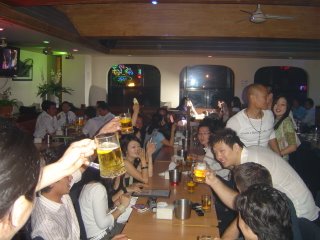 So after that we went out to a drinking bar. At these places you just sit down, order alcohol and some snacks and drink until the early hours. One of the first Korean words I learned here is 'konbe' which means 'cheers'. 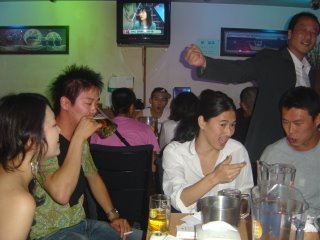 See that guy in the white shirt? He's Eric, the French Korean adoptee who I'm staying with and he reminds me of a pirate. He talks like a pirate, eats like a pirate and pretty much does everything in a pirate-like way. He wants to go bungee jumping next week. 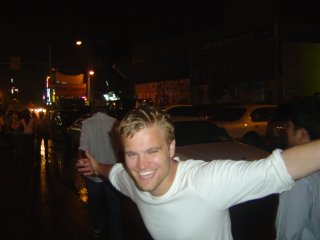 This guy is from Copenhagen. I can't remember his name because my memories from that night have been tainted from alcohol consumption. But I remember he was nice. 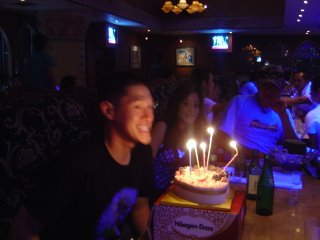 This is in the Kangnam area of Seoul, in a nice bar called Tachyon. It was Andrew's birthday that day, he's an American GI working at the military base. 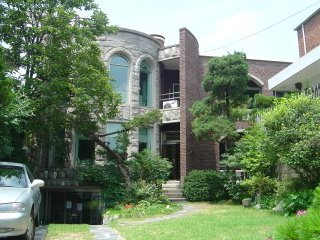 These are views from the front yard of the guesthouse. It's pretty comfortable here and only KRW15,000 per night. One Australian dollar is about 750 Korean won. 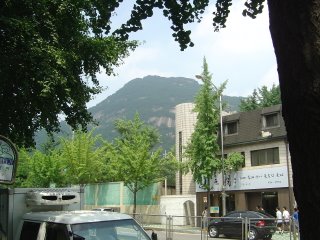 This is the mountain right near my place. I had problems memorising landmarks and this was the first one that I began to use to find my way home. Thankyou, mountain. 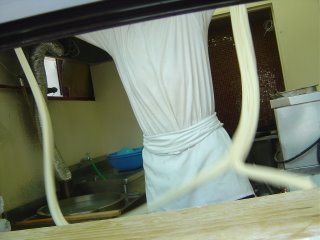 Down the road from the guesthouse is a guy who makes either bread or noodles in the morning. He throws dough around and stretches it in a window while people pass by. 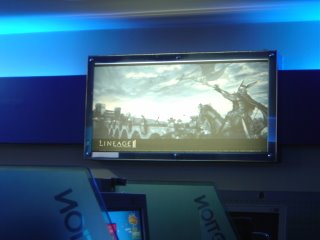 This photo is for all the Lineage 2 freaks back home. This sign was up in the first PC Bang (net cafe) that I went to. There are lots of Lineage posters here, including one for Chronicle 5. 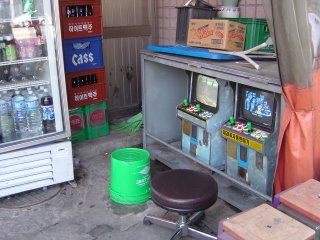 These arcade games are really tiny and cost only about 20 cents a shot. I played Metal Slug 4 on the right. They're really small and I had problems bending low enough to see the screen. Some little kid was watching me too. Luckily my skillful moves impressed the audience. 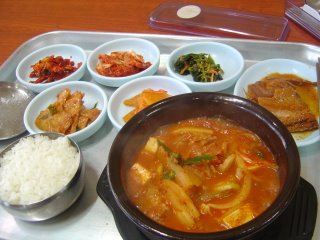 Right next to my place is a little food shack. For less than AUD$5 you can get a hotpot soup and side dishes. This is dwen jang jigae, fermented tofu chilli hotpot soup. It tastes really good and has a bit of a kick. 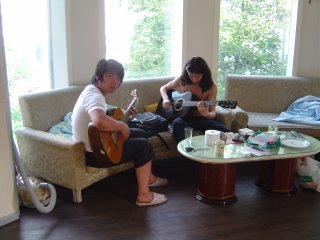 Here's Daniel from Sweden and Eric the pirate playing the guitar. They're pretty good and are thinking of performing at an upcoming gathering. Eric likes AC-DC.

Well that's all for now! Apart from some digestive problems I've been having a really good time. In a few weeks I hope to get an English teaching job. But first I need to party, drink lots and meet people. Seeya
Posted by Lee Farrand at 9:57 pm