We finished teacher training in Seoul on a Tuesday night and celebrated. The training program was demanding at times but overall a worthwhile experience. 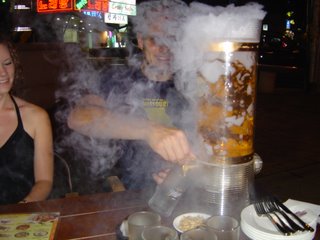 This is Jef, wandering in the mists of a 4 litre beer cooler. Four litres of beer like this will cost you around twenty bucks. It kind of looks like his arm is on fire, which was an omen of times to come because later in Busan his hand really did catch fire as we were drinking incinerated spirits. 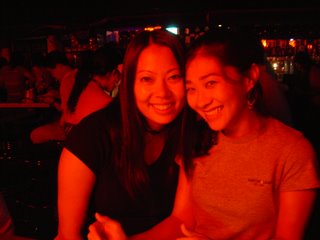 Part of me was wanting to stay in Seoul, but I had previously made arrangements to end up down south. This is Maria and Mi-Hyun from the last night I went out in the big city. 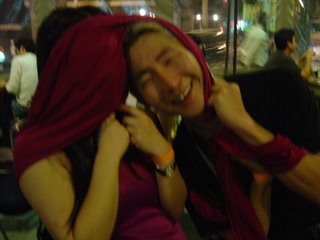 Purely impromptu moments like this are few and far between. If you disregard the blur caused by fumbling with the camera, a hidden symbolic message emerges. It says something like 'Never underestimate the creativity of a Dane at 6am'. 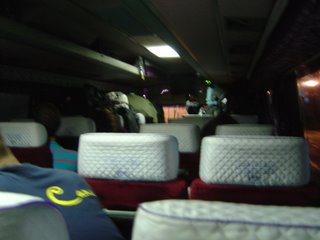 So we boarded the bus after saying our goodbyes and left for Busan on a Saturday night. I heard that the countryside on the way is nice, but it was too dark to see anything. 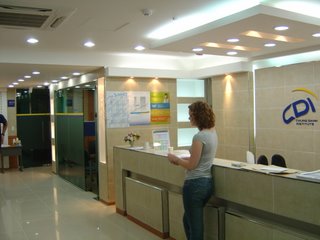 And we arrived at our branch early on Sunday morning. This is Meaghan standing at the reception desk. We're the first batch of teachers here and the branch is new so everything is nice and shiny. 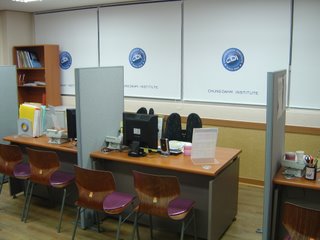 This is the admin office. The Korean staff here are really nice and all speak decent English. I'm looking forward to the day when I can speak the language enough to have a Korean conversation with them. 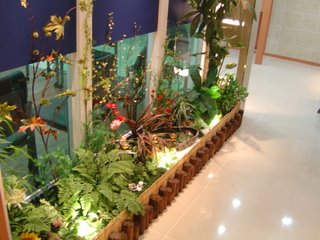 Some foliage near the water cooler. They give us free food and a staff room here too. 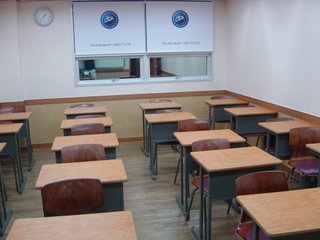 The classrooms are built for larger capacities but class sizes rarely exceed ten students. We've been teaching elementary to middle school students at different levels. When I know the students well enough, I'll post some photos of them. Some of the little kids are incredibly smart. 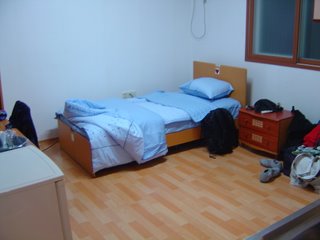 This is the accommodation the company arranged for me. It's a nice place with a gas stove, fridge, shower and ondol (heated floors for the winter). 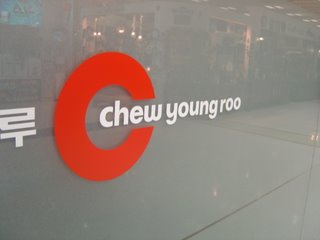 The next day, some of the admin staff took us out to this restaurant. When I saw the name I thought we'd be dining on some baby kangaroo meat, but it turned out that this was the name of the chef. 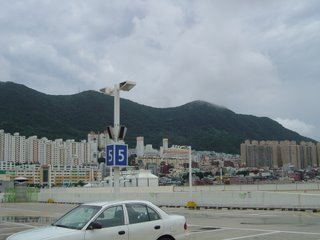 Busan is a nice city, with cleaner air and is a bit more scenic than Seoul. The mountains and the beach are really close, which gives the place a more relaxed atmosphere. But it's still a big city with its own subway and nearly 4 million people. 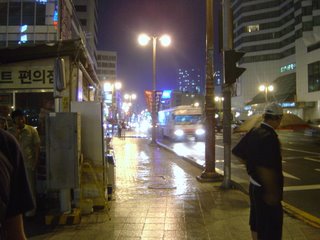 Last week Jef and I made a night trip down to see Haeundae beach, one of the major tourist attractions in Busan. The area around it is also a nightlife district which has a beachy feel to it. 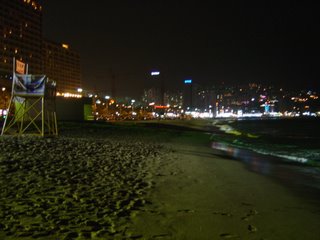 This is the beach at night. It's an impressive sight when you're standing on it and the sand is different to what you find in Australia. The individual grains are bigger, which makes it feel funny to me. 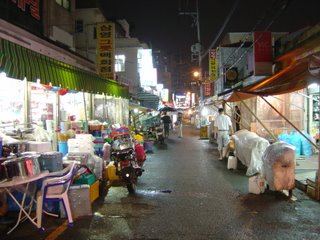 Nearby is a market area, some of which opens until late. You can buy all sorts of live seafood here, but I've heard that there's a much larger seafood market elsewhere. 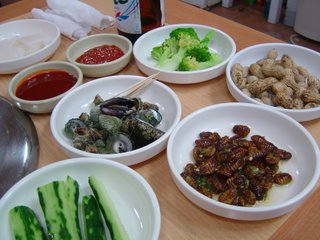 So Jef and I ate at a random seafood shack to see what was on the menu. These were the appetisers the waitress brought for us. In the middle you can see raw sea snails and those brown thingys on the bottom right are boiled silkworm larvae. The sea snails you scoop out with a toothpick and they taste a little bit like mussels. I had a bit more difficulty in summoning the composure to eat a baby silkworm, but in the end it tasted a bit like barley and peanut butter. You pop the skin in your teeth and the barley-peanut buttery insides ooze onto your tongue. I only ended up eating 4, but school kids here love them. 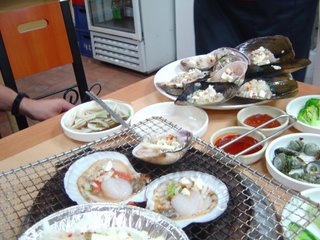 For main course we pointed at something on the menu and ended up getting a nice mixture of large fresh shellfish that the waitress cooked for us on the bbq. After that, some local woman who was also eating at the place took over and chopped our food up for us while giving us a tutorial in Korean. That's one thing I've noticed in Busan, some of the people are a little eccentric but also very friendly. We bought the woman a beer for her troubles and she was really happy. The shellfish boiled into a broth and it turned out to be an incredibly good seafood soup, the best that both of us had ever tried. It's definitely worth a try. 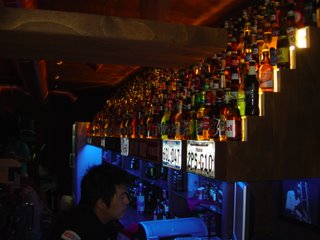 We also found a western themed bar in the area, where you can buy imported beers including Coopers Sparkling Ale from South Australia. 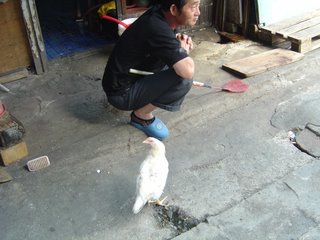 The next day I went for a walk down the street and had a poke around. This man gave me permission to photograph him and his chicken, which was nice. A lot of older people here, especially women, prefer not to be photographed by strangers. It's important to ask them first. This man was squatting outside his shop and swatting flies for his pet chicken, which was behaving more like a dog than a bird. 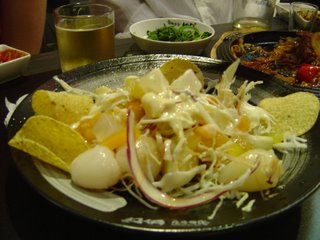 We've eaten out a fair bit since arriving and checked out most of the nearby places. This is one example of strange fusion cooking you can get in Korea. I don't know what it's called but it had corn chips, lychees, cabbage, mango and mayonnaise in it. If I had to name it I'd call it a Tropical Mexi-Asian salad. 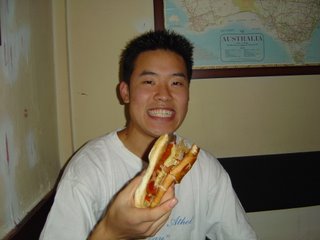 Two days ago, the O'briens Irish pub down the road had its opening night. I happened to run into the owner last week by accident and he told me about it. The place is run by an Australian from Brisbane and a Korean-American adoptee. This is me eating the first ever sauerkraut hotdog that came from their kitchen. Their menu is western and they're letting us have bar tabs whenever we visit. 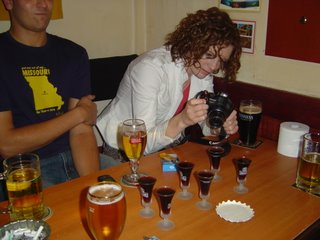 $3 shots of Jager? I think I'll have a photo of that too. 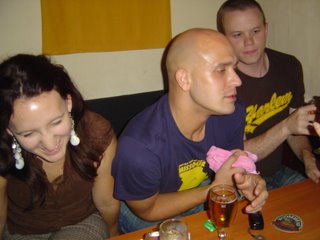 That night we lit up some alcohol and dropped it in beer. Jef had the shot lit up properly but dropped it on his hand. 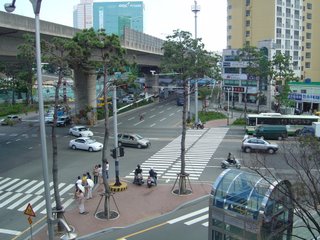 Ok that's it for this session! There's still plenty of stuff in Busan that I haven't seen yet, but as I settle into my job I'll get out and see more of it. I like the fact that this city has a lot of trees, and land is cheaper so everything is a bit more spaced out. If anyone's thinking of visiting, be sure to let me know.

LMAO at the kangaroo meat comment. From Australia i can definitely see your conclusion. This blog is great! You have a great writing style (re: informative yet humorous). Love the photos. :D Great insight into Korea!