I moved to Busan to start working last Saturday, which has been going well, but this blog post is about the in-between time I spent before I came down south. Next post I'll update you on what it's been like in the new city. 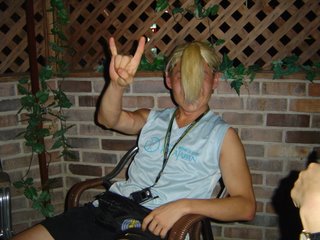 So this is Thomas sporting the latest hair-fashion craze here in Korea. It's not entirely practical but is great for conversation. Thomas invented it all by himself. 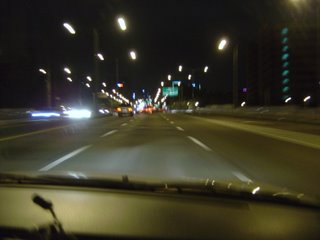 When I first came to Korea, I caught a taxi from the bus depot to my first hotel. My first impression was that taxi drivers here are lunatics, but I remained calm and composed as we weaved in an out of traffic on a six lane highway during rush hour. My updated opinion is that taxi drivers here are talented lunatics who really know how to drive. Often they'll come within centimetres of other cars at rediculous speeds. This photo shows a typical ride back home, doing speeds in excess of 120km/hr in a 60km/hr zone. 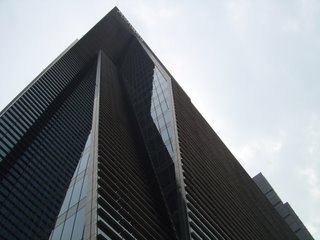 The Gangnam area of Seoul is a commercial district with a lot of interesting architecture. I heard that many of the architects were from western countries but strived to include asian influences in their works. The results are appreciable and distinct. This is the Dongbu Financial Centre right outside our hotel. 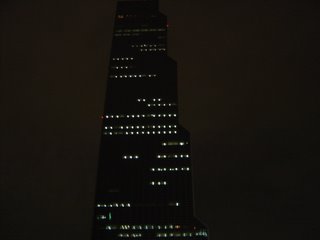 And this is the Seoul World Trade Centre building just down the street. There's a really good view at the top and a couple of nice restaurants. 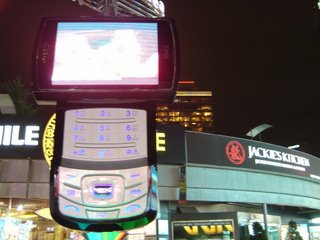 The COEX mall is a giant shopping area that's similar to Westfield in Australia but appropriately proportioned for Korean consumerism. In this mall you can see movies, go to a huge aquarium (which I'll show you in detail soon) and there's even a casino attached. Koreans seem to have an ongoing obsession with handphones and electronic gadgets. That huge mobile display with a working television is a good example. On the right you can see Jackie Chan's restaurant, which we ate at. The food was surprisingly good. 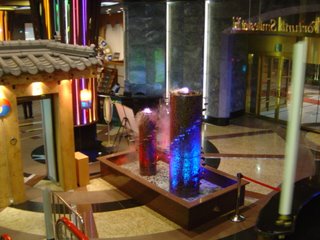 This is the entrance to the casino, which is exclusive to foreigners. Only people with an overseas passport are allowed to gamble here. The place isn't busy at all and it seems that someone overestimated the market. 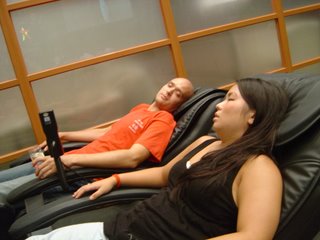 Here are my casino buddies, Jef and Amanda, enjoying the free massage chairs provided. The chairs can get pretty rough if you put them on the right setting. When I say rough, I mean rough enough to have you worried about leg amputation. 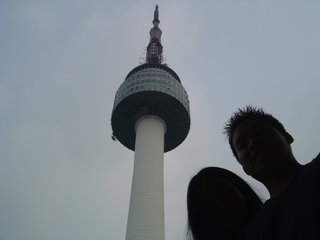 Here we are the next day at Namsan Tower. If the tower is 353 metres tall, why do we look so big in this photo? Well, Jef took this shot by lying on the ground and we stood next to him. This is now our patented method of photographical ingenuity. 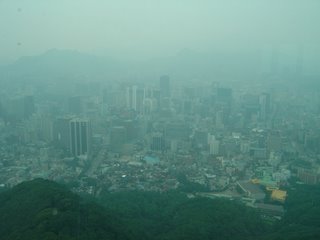 I guess the last photo was a little more impressive than this one. The day we went to the tower, it was really smoggy so we couldn't see much of the city at all. Better luck next time. 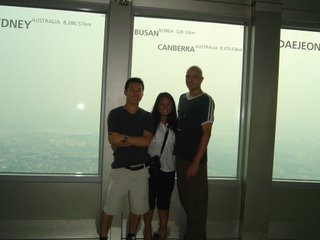 On the observation deck they have distance readings for major cities in every direction. This is us at the south facing window, only 8300 km from Canberra. 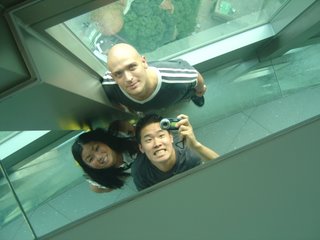 Another example of our photographical creativity. Ok, so this is us looking up at a large but narrow mirror on the ceiling of the observation deck and me snapping it with my camera. Cool ha? 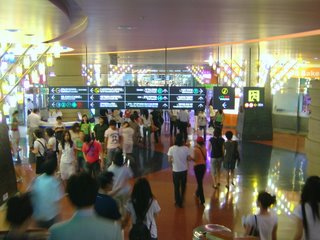 Now we're back at the COEX mall. There are a whole bunch of stores that sell everything from self-assembling robotic caravans to toilet seats that teach you how to speak Korean. Well I don't know if those things actually exist, but if they did, you could probably buy them here. 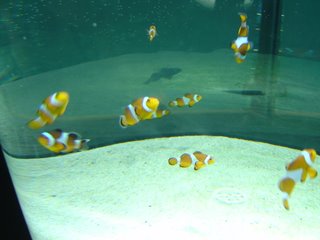 Back when I was a little boy I remember the first thing that I ever wanted to be was a marine biologist. Or maybe it was a racing car driver. Or an astronaut. Anyway, I can remember wanting to be a marine biologist for a long time. That somehow equated to me convincing Jef and Amanda to visit the COEX aquarium all these years later when we were in the mall. It was expensive to get in, but really impressive. I recommend everyone should visit this place. In this photo you can see Nemos, clownfish that usually live in sea anemones. 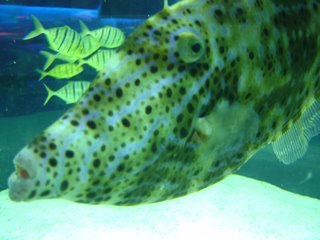 The good thing about the place is that the fish are huge and get really close to the glass and just sit there staring at you. They've probably been camera trained. 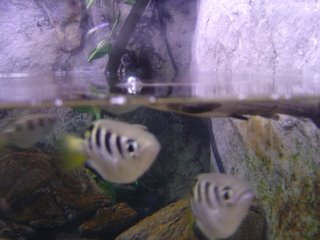 This is in the freshwater display section. At the surface of the water on the middle right you can see a fishes body. Actually, those two bubbles in the middle of the pond, not the ones next to the glass, are the eyes of the fish. It's called an Archer fish and sits like a crocodile in the water. When it sees an insect, it shoots a pellet of water at it and the insect falls into the water. It's a fun way to get a meal, but I still prefer a noodle shack. 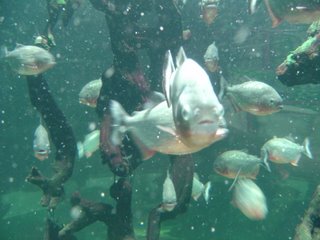 Amazonian piranhas. These fish go pretty crazy when they smell blood and can strip a whole cow in a few minutes. Definitely not the kind of fish you want to kiss and throw back. What I find interesting is that most fish face the same direction when they cluster together, but piranhas all face outwards, due to their predatory behaviour. 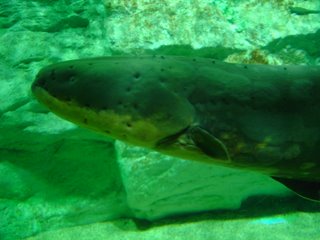 This is a live electric eel. The head diameter is about ten centimetres across. These creatures zap the water with electricity and eat whatever floats to the surface. 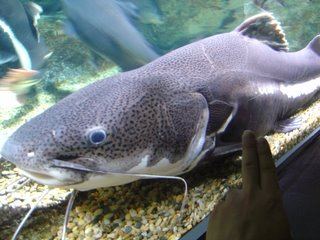 A very large catfish I nicknamed Senor Catfish, due to his moustache-like feelers. 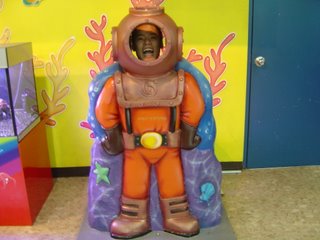 A regular scuba diver on display. 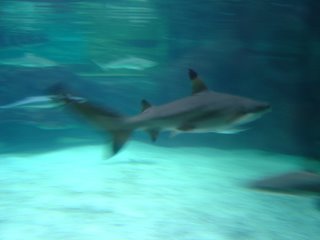 The shark display was huge and the sharks were swimming so fast it was hard to get a good shot of them. There were also schools of large fish in the same pond, but they seemed to be getting along with each other. Much to my disappointment. 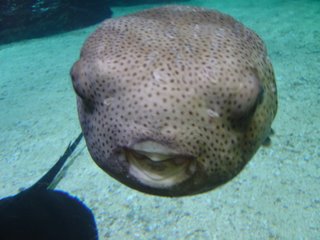 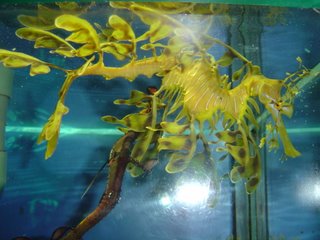 A leafy sea dragon. These are an endangered species and live around the waters in South Australia. I remember seeing a documentary on them once. They look like floating weeds and the males get pregnant. 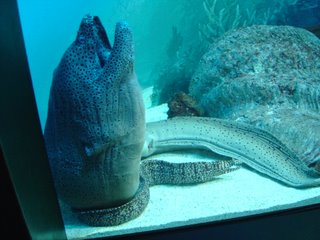 I heard that back in medieval times, bad slaves would get fed to the Moray Eels. Now I can appreciate how undesirable that would have been. 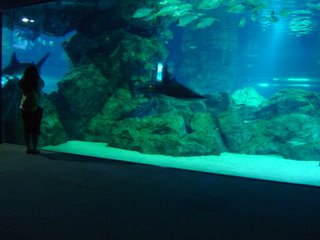 Here's a further back view of the shark display. The window was so wide that I couldn't take a photo of the whole thing. 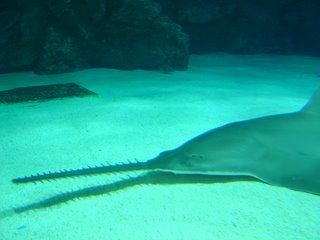 This is a sawshark. These odd little fellows lie on the bottom of the sea floor and chop up crustaceans and other morsels with their saw-toothed nose. They do this by thrashing their heads from side to side. If I believed in god, I'd say that god is a pretty trippy guy who likes making weird animals. 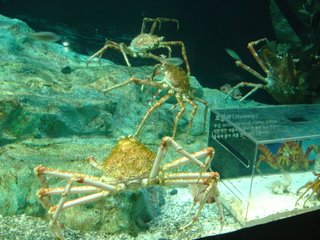 These are spider crabs that walk around in an insect-like way. Actually, all of today's insects descended from a common ancestor to crustaceans. Your biology lecture is now over. 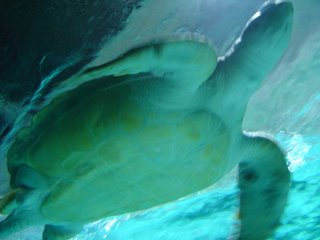 The grand finale of the aquarium is a transparent hallway that you walk through with all kinds of things swimming around, including this green sea turtle that was swimming overhead. 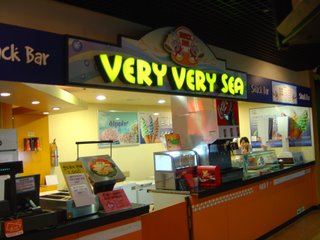 Mmm, looking at all that seafood made me hungry. Luckily there's an appropriately named seafood tucker shop at hand. 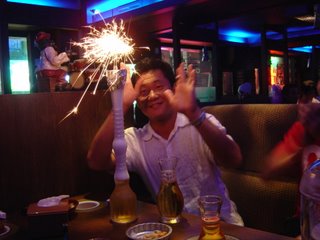 Well that's all for this post! To celebrate, here is a photo of a birthday beer for an American adoptee whose name I forgot. This bar had little drink coolers built under the table that keep your beer cold. Anyway I'll post again when I have time and show you around Busan. It's a nice city. See you then!
Posted by Lee Farrand at 4:16 pm