Settling down in Busan 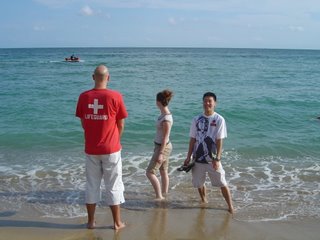 We returned to Haeundae beach on a Sunday to get a better look at the place. It's a very scenic area with islands on the far side and various nearby markets, walking trails and coffee shops. 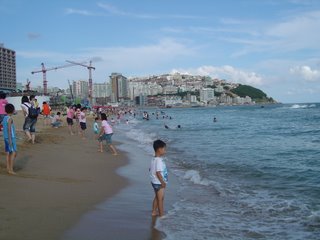 Jet skis are allowed to roam freely anywhere, even right onto the beach to pick people up. They weave in and out of swimmer traffic, kind of like the scooters in the markets here. 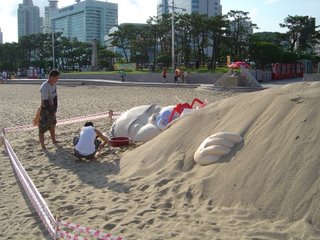 There was a large art sculpture of a baby in the sand. The people in the photo were mixing paint. 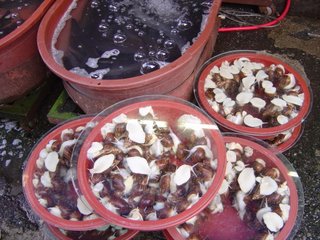 In the market stalls nearby there are all sorts of culinary curiousities available for purchase. While live octopus and eels are becoming quite familiar to us, these large albino snails were a surprise. I'm not sure whether you're supposed to eat them alive or not, but they're about the size of apricots. 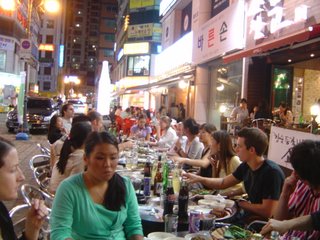 This is from our first proper meet-up with staff from the other branches in Busan. We like to call our area 'The Ghetto', because it doesn't have any of the attractions that the other branches have. Our area is close to the centre of the city but there's only a block of flats and a large freeway for amusement, because we're situated in a mountain pass. But our branch is still the coolest, naturally. 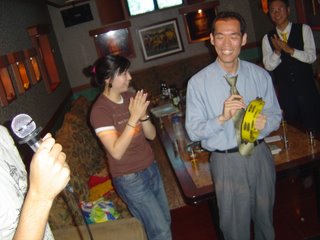 One night we went out to dinner with the admin staff at our school. This is John and Ji-Hae clapping along to karaoke later that night. Karaoke bars are really popular here, you can find them on just about every residential block. In some areas you can find more than five within a one minute walk. 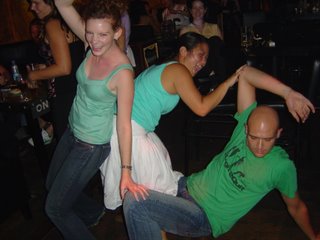 We found a bar called The Vinyl Underground, which was nice and a bit more spaced out than the places in Seoul. The bars in Busan aren't as crowded, which can be a good thing or a bad thing depending on your perspective. 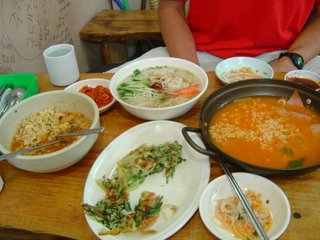 Food in Busan is pretty cheap and the service is a little warmer if you eat back at the same places. You can get ramyeon noodles for about AUD$1.50 and this meal cost us about 4 dollars each. They always give you more than you can eat, with free side dish refills. I found a similar place closeby that has a menu with the most expensive dish on it costing $2.50. 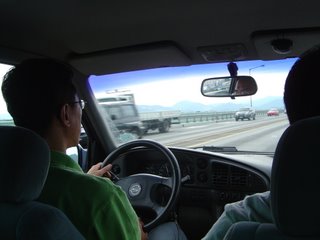 On our recent day off we ate fish soup with John and Skippa, both admin staff at our company. Then Skippa (in the green) decided to take us to his hometown of Changwon which is about an hour drive away. The journey was through the mountains and we passed a few long tunnels. 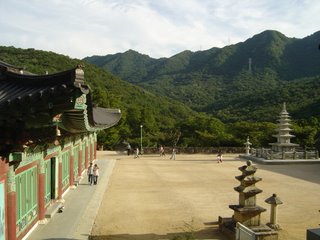 He took us to a Buddhist temple complex close to the city which was well kept and very quiet. The mountains were all around and we drank water from a freely running spring. The water was quite tasty. 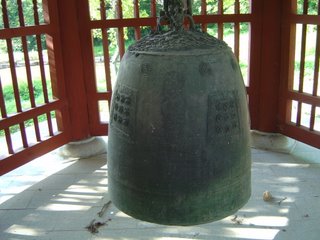 This is a big bell they have. On the description the English translation states that "it is a Buddhist bell of poor craftsmanship'. 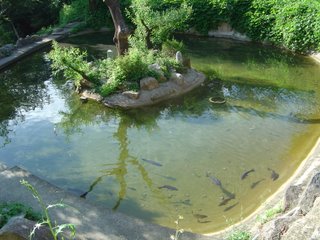 Large carp were swimming in a nearby pond. Carp are native here, but are feral animals back in Australia. Near the middle of the pond is a stone bucket that you try and throw money into. I managed to land 2 out of 5 coins in it, because when I was young I was good at marbles. 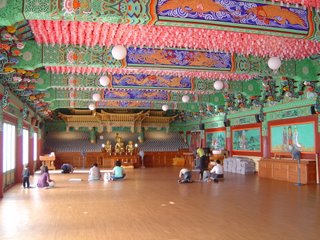 The temples were very clean and had a peaceful atmosphere. Gold Buddha statues were in most of them, with various depictions of mythical events painted on the walls. A couple of monks were doing various duties around the place. Temples like these often have 'temple-stay' programs where you can come and live like a monk for the weekend, leaving your city troubles behind. I wouldn't mind giving it a go one day. 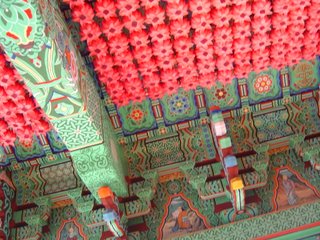 The ceilings were decorated with intricate designs and hanging lanterns. You can also buy a tile and write a chalk inscription on it. Then the monks put it on the roof when one needs replacing. 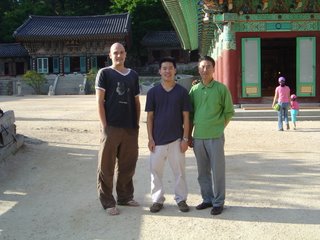 Here's Jef, me and Skippa absorbing some temple atmosphere. Skippa doesn't speak much English, but he used to be a professional singer and can sing Italian opera songs in a tenor voice without a microphone. I reckon it would sound pretty good coming out of the temples. 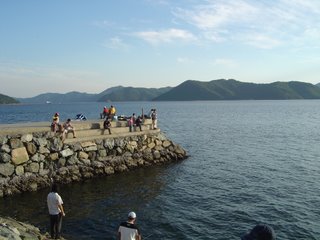 Then we went to Jinhae, a nearby harbour city. It was a really nice place and the harbour was huge, with clean water and islands. A whole bunch of people were fishing from different places, with some families bringing portable stoves to cook things in. 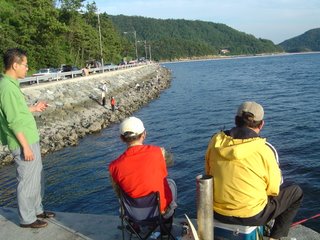 These two guys were using starfish as bait and had a whole pot of mussels cooked up behind them. They gave some to us and they tasted really fresh. We're planning to come back here someday and go fishing. What a nice way to spend a day off.