Jeju is the biggest island in Korea and located conveniently close to Busan. It was once the only unoccupied territory during the Mongol invasions and has a distinctly different climate and culture to the mainland. It has its own government and is famous for tangerines, diving women and little stone statues called dol-harubang. 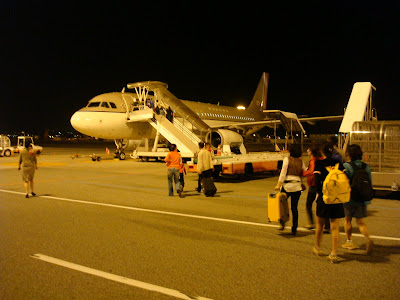 But I never got around to visiting it until the other day. We booked tickets through Asiana Airlines (Korea's discount airline) and headed over for a weekend. Return trip tickets from Busan cost around $140 each. I left on the Friday night, walking out of my classroom in Busan at 7:30pm and was standing in Jeju airport at 9:00pm. Heather had arrived earlier on the Thursday, because she had more time off. She met me when I arrived at the airport, which is always a nice thing. 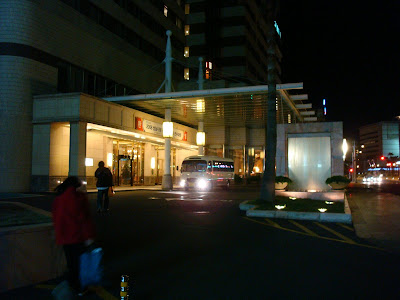 Heather wasn't happy with her original package accommodation, which didn't look anything like the internet advertisement. So she cancelled our booking with them and moved us to another place which was a little on the steep side, but much nicer. For short weekends away I don't mind staying in a $10 koshiwon, but I couldn't complain about our new lodgings. 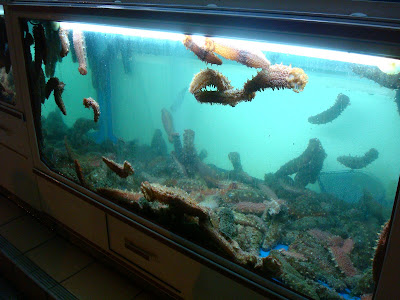 I dropped off my bags in the room and we headed out to find some dinner. The first oddity we came across were these large sea cucumbers in a restaurant tank. They sell sea-cucumbers in Busan, but I've never seen them in a tank like this before. Curiously enough, when sea cucumbers feel threatened they are able to self-eviscerate and eject a portion of their internal organs into the water to confuse the predator while they escape. The organs will then regrow over a couple of weeks.
And in Japan, they are called 'sea-mice'.

I think they are more cucumber-like myself. 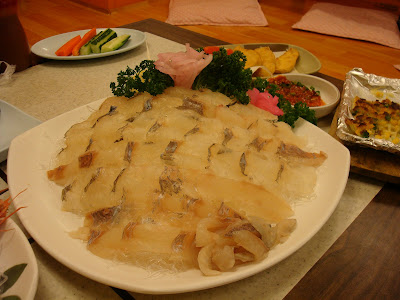 Jeju is famous for it's fresh fish, so we thought it appropriate to eat some Korean sashimi, or hue. This fairly regular plate of 'coral-bream' was more expensive because it was a wild fish. Wild fish are supposed to have more flavour than their farm-bred counterparts. I'm no expert, but I found the distinction to be negligible. It was still nice though. 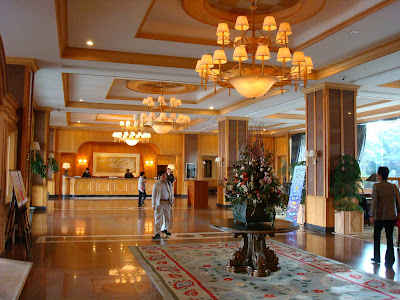 The next day we noticed that the hotel looked quite splendid in the morning light. We stayed at the Oriental Hotel, which has its own casino and a couple of bars attached. It was off peak season, so not a lot of people were around. In the lounge bar later that day, we were the only two enjoying the live music. 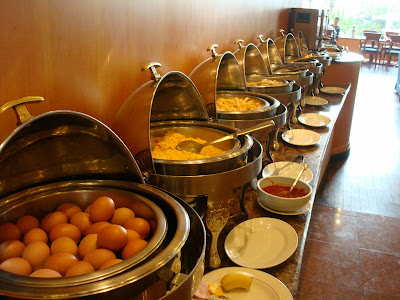 Included in our room fee ($140 per night, twin share), was free buffet breakfast. I'm a huge fan of western style breakfast buffets. Hash browns, bacon, scrambled eggs, sausages, juice and salad were all beckoning. I went back for thirds. 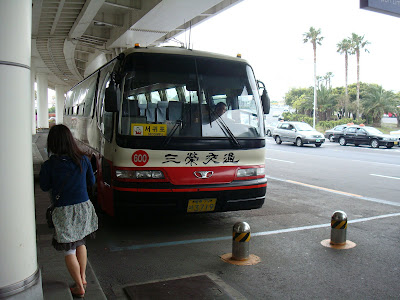 There are three ways to get around Jeju as a tourist. The first is to rent a car, which we opted out of because we don't have licenses. The second is to hire a taxi driver for the day. That happens quite commonly in Jeju, but at a fee of $80 per day, it didn't seem particularly worthwhile. The third option is to take buses. They leave from the airport and don't go everywhere, but they stop at major terminals around the island. A bus ticket from one side of the island to the other is about $6. 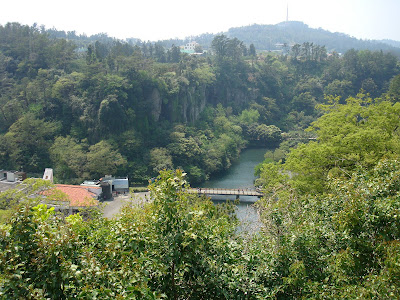 We hopped on a bus after only waiting for a short while and traveled to Saguipo city, which is on the south side of the island. Soon after we got off the bus, this view greeted us. Because Jeju gets a lot more rain than the rest of Korea, the geography of the land is different. 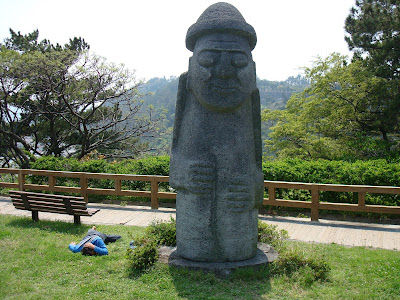 This is a dol-harubang, which literally translates to 'stone grandfather'. Jeju people have made thousands of these throughout history, carving them from volcanic rock. They are supposed to protect villages from ethereal mischief, as well as bring fertility. The phallic resemblance is entirely deliberate, though it isn't a source of humour here.

They remind me of the Easter Island moai statues. That guy on the ground to the left was having a nap. I guess he felt safer with the harubang there. 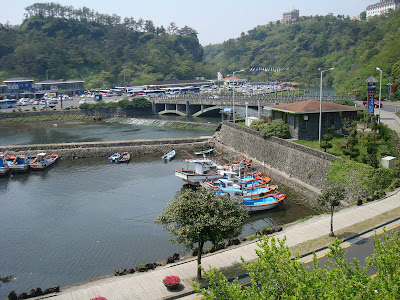 Jeju City and Soguipo are the two cities on the island, but they have more of a country-town feel to them. It would be a nice place to retire. 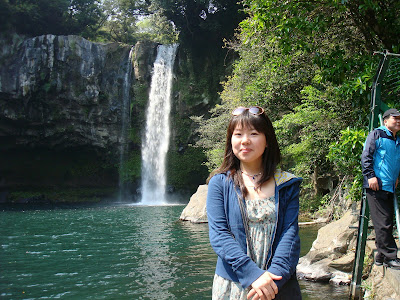 The first attraction we visited was the Cheonjiyeon Waterfall, which is easily accessible by foot. The weather was perfect and the water was very clear. In the area were turtles and fish. This location is also the habitat of the Marbled Eel, which has a top selling price of $1000 per animal. 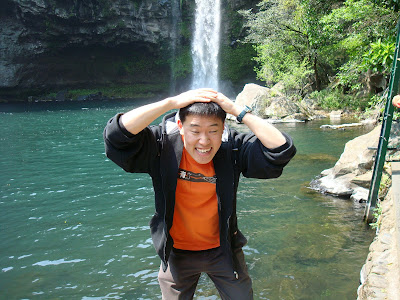 If you stand too close to the edge, the water might fall on your head, as it did with this bumbling tourist guy. 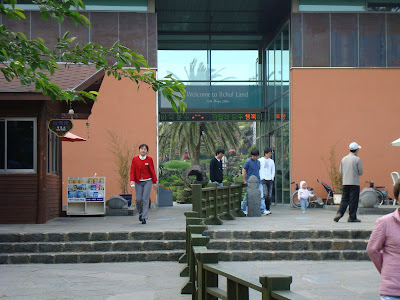 Next we went to Il-Chul Land which is to the east of the island. It's famous for its gardens, statues and caves. We caught another bus from Saguipo and saw some good views of the island along the way. 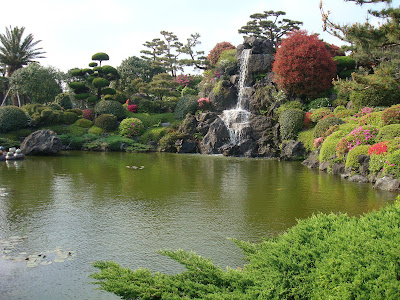 The landscaped gardens were impressive and the area itself was very large. Along the walking trails were various stone carvings and cultural exhibits. 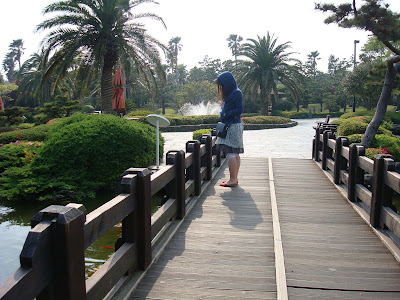 Some of the areas were divided up into small botanic gardens and there were greenhouses with cactus displays as well as a lot of palms and tropical plants that are unable to grow on the mainland. 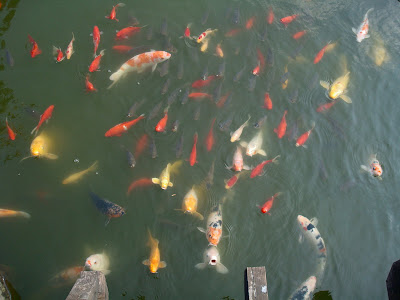 This is what Heather was looking at in the previous photo. Carp are common in the temples and parks of Korea. These guys reminded me of those doctor fish that nibble your feet. 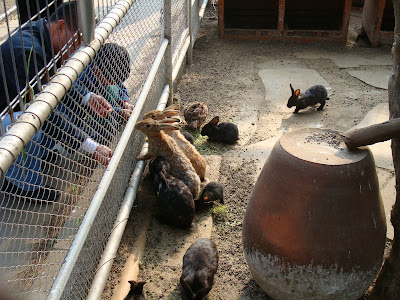 Another section had a small wildlife display. An old Korean myth says that there are rabbits living on the moon that make ddeok (rice cakes). Scientific inquiry has since busted that myth. 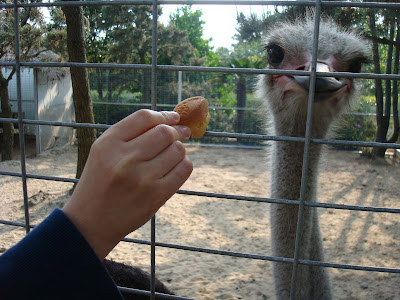 Ostriches are not the brightest of creatures, but at least this one was in a happy mood. We tried to feed it, but it seemed more interested in nibbling the bars. If you ever need to immobilise an ostrich, simply put a sock over its head and they will become instantly docile. I saw it on a television show where some guy had an ostrich farm. 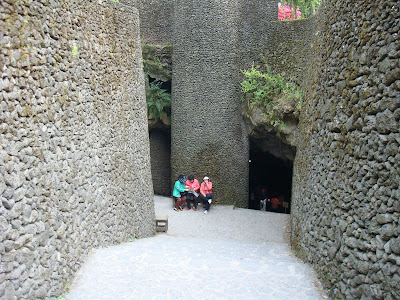 This is the entrance to the Micheon Cave complex, in the centre of Il-Chul Land. 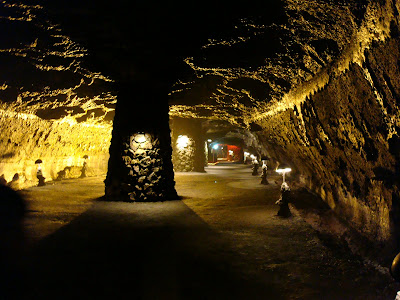 The caves are actually lava tubes that were formed during volcanic eruptions on the island centuries ago. Magma would flow through these passages and eventually reach the sea. Back when I was a boy scout, we used to explore caves like these for kilometres on end. My favourite cave was one called Gloop, which was next to a river and filled with water. We were often up to our waist in soft mud and I lost my shoe there. 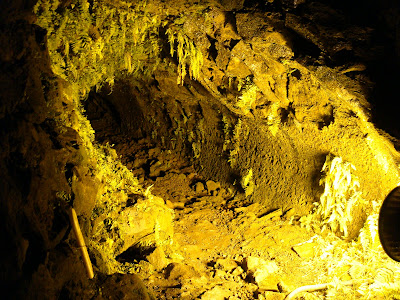 Deeper in the caves, far away from the entrance are some ferns that have started growing on the walls and roof, in response to the sodium lamp lighting. There are even a few insects floating around. Life is a curious thing. 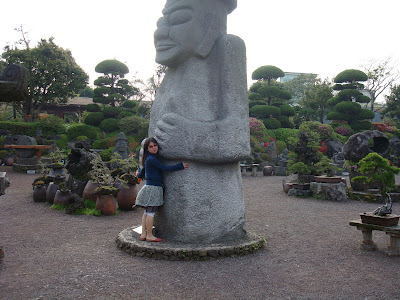 We ended the day late in the afternoon and had to head back to Jeju City. But Heather just wasn't ready to leave. 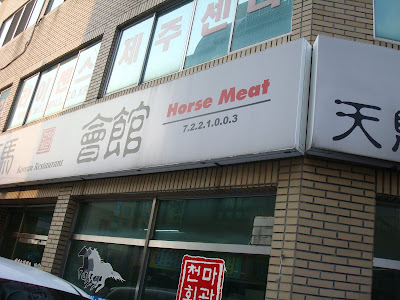 Jeju is also famous for its horse meat. We asked a taxi driver to take us somewhere that was popular and he dropped us off at this restaurant. It was getting late in the day and we had spent a lot of time walking. So by that time I was so hungry that I could have eaten a... erm, rabbit. 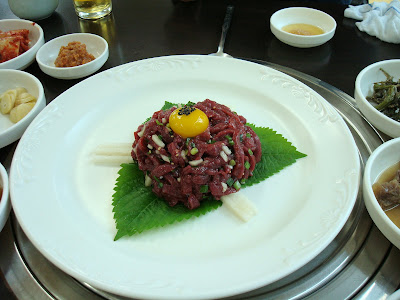 This is horse sashimi, raw horse meat with an egg yolk on top. It tastes fine, but surprisingly bland. There are no meaty flavours in the raw stuff, it tastes more like soft tofu or maybe jellyfish. 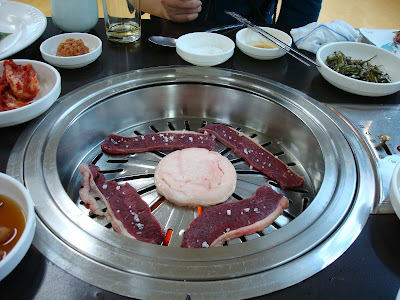 Then we had horse barbecue. The white thing in the centre is a lump of horse fat, which flavours the meat. When it's cooked, it tastes a little more like pork or beef. It was okay to eat, but I wouldn't go out of my way to do it again, because it's about double the price of beef but doesn't taste particularly unique. I prefer kangaroo meat myself. 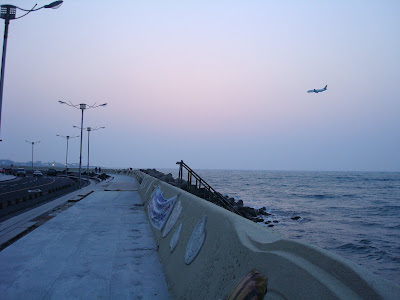 Then we went for a walk near our hotel. It was a little cold but the colours were nice. After that we had some cognac in the lobby and watched tv in our room, which was a nice way to wind down. 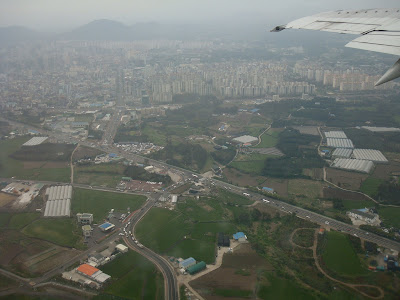 We ended up leaving on the Sunday morning because the flights were all booked out for the afternoon. Jeju makes most of its money from tourism, so the whole island is very tourist friendly, with plenty of things to do. I think the best time to go would be in the summer, when the beaches are nice and warm.

It's always nice to escape the city you live in, even for a short while. We had a good weekend there and I'd recommend it to anyone who's thinking of visiting.

See you next time!

Wow. Breakfast buffets really differ depending on the country. Here (Sweden) we commonly have sour milk (thick) and oatmeal porridge =)

Hello! I'm heading to Jeju Island tomorrow for the Chuseok w'end. I'm going alone, and was looking for things to do. I enjoyed reading your post ^^