Another Year and What We're Eating

The new year came and went without much ado. I heard a guy on TV recently say "On New Year's Eve, no one really knows what to do apart from stay up late." And for our case at least, I'd have to agree. Heather and I felt like doing something special, but it was really cold and we had to wake up early. So we were fast asleep by 11:30pm, which was the first time I'd slept through the countdown in probably 20 years.

Is this the dawn of our middle-age? 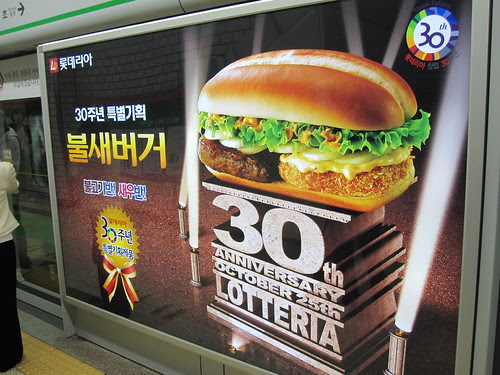 Lotteria is Korea and Japan's version of McDonald's. I don't eat much fast food in general, but the odd McDonald's breakfast sometimes works its way into a late night out. Fast food in Australia is relatively cheap, but in Korea it's more expensive than kimbap cheonguk. So I'll usually go for the healthier option.
It would be nice to say that Lotteria is better than McDonald's, but that would be false. Lotteria doesn't put a lot of effort into making its food palatable, and comes up with all sorts of intriguing burger non-ideas. I tried their old 'Australian Burger' once, which had harder bread (supposedly resembling damper) and their 'Tropical Burger', which had a sad looking slice of tinned pineapple on an otherwise even-less-exciting meat patty. Now, to celebrate their 30 years of unremarkableness, they've released a Meat and Shrimp burger. That's what happens when you try to reconcile the overwhelming output from a hamburger company's creativity department. I believe it is colloquially known as the Shreat burger. 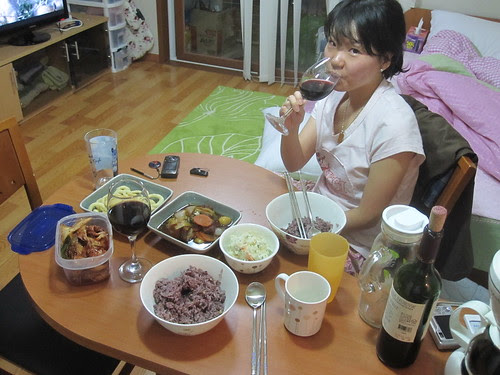 Heather seems to be enjoying her time off. Most days I have to eat near the lab, but on weekends we usually get a couple of good meals together. I cooked that beef thingy in the middle, which was a 2 hour stew. 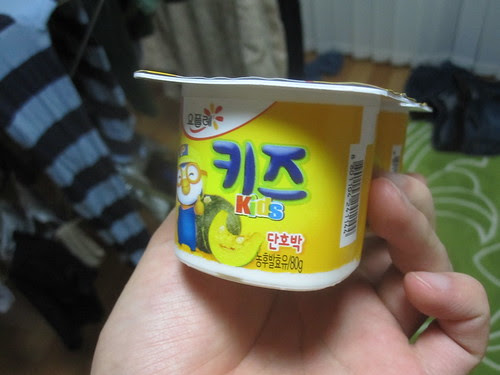 International food companies have long known that people's tastes are regional. That's why Vegemite doesn't sell in Korea (although now that I think about it, it probably would), and why Yoplait have successfully released this pumpkin yoghurt here.
Now, the funny thing isn't that they sell pumpkin yoghurt, it's that Heather bought it without batting an eyelid and still can't fathom why anyone would find it peculiar. 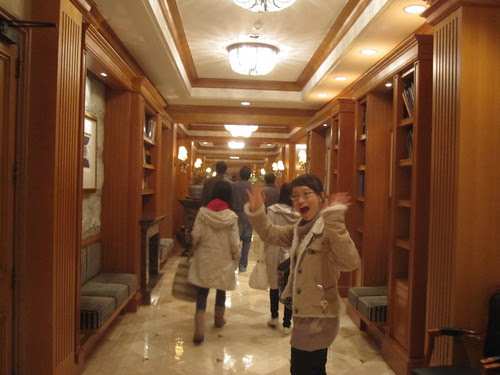 Every once in a while our professor likes to take us out to eat somewhere flash. As you can see from the photo, Se-Kyung becomes particularly excitable when such moments occur. 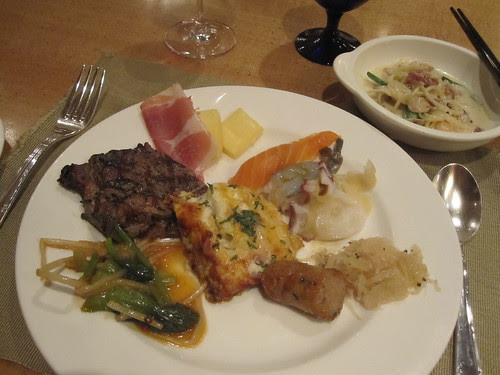 We had a buffet at the Ritz-Carlton that night. When I was younger I always saw a buffet as a challenge to eat more in value than the price you pay. Now a much wiser and indigestion-wary variant of myself approaches buffets with due caution. 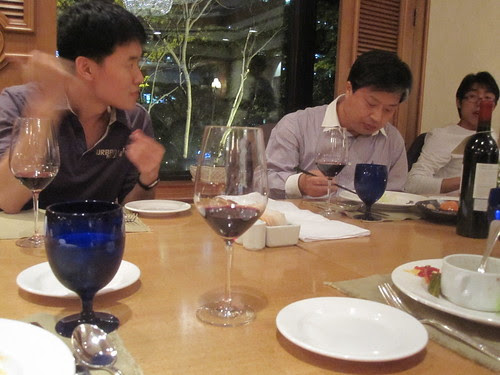 That's me on the left and our professor on the right. He happens to be very good at science and knows a lot about bacterial genetics.

But I'm probably better at Starcraft. 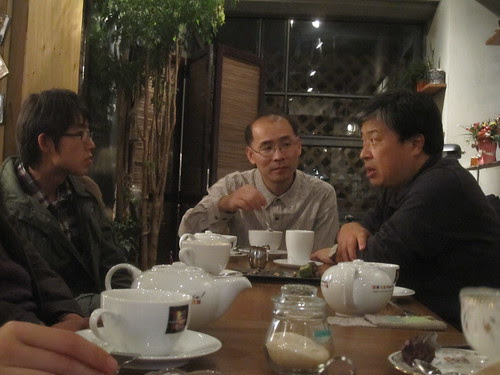 The guy sitting in the middle is Dr Jin-Woo Kim, who recently came back from the US. He's a graduate from our lab and has been doing a post-doc at Indiana University. 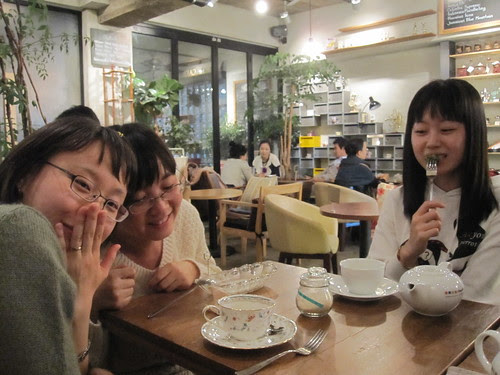 And here are the girls of the plant bacteriology lab, Se-Kyung, Chen Jing and Eun-Hye. Grad students in general are pretty strange people, but I would have to say that the girls in our lab resemble normal humans more than the boys do. 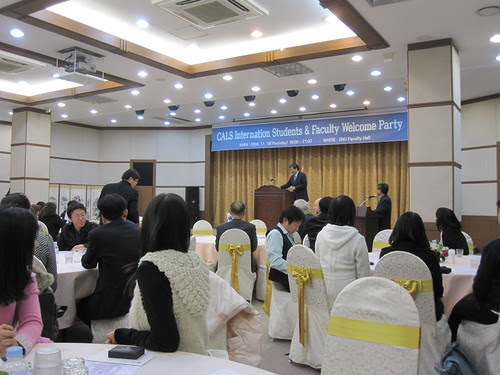 Seoul National University has its pros and cons. It seems to be half-heartedly making progress away from endemic traditionalism and looking toward a more creative future. In global rankings like the Times Higher Education Supplement, it tends to lose points due to a shortage of international students and faculty. As the only Western student in the department, my suggestion for improvement would be to discourage the enormous socially-preserved gap between the status of the professors and those of the students. Professors deserve respect, but to the point where the students are discouraged from speaking their mind is a little contrary to the spirit of education. 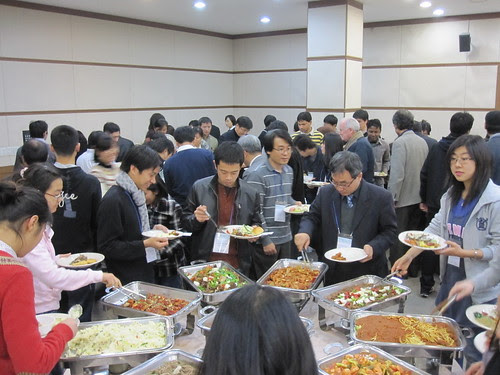 But as long as they give us free food, we'll stay happy for a while at least. Recently, our department decided to acknowledge its foreign constituents with a dinner for all of the international students. I don't know what prompted it, but it was a nice gesture and duly appreciated. 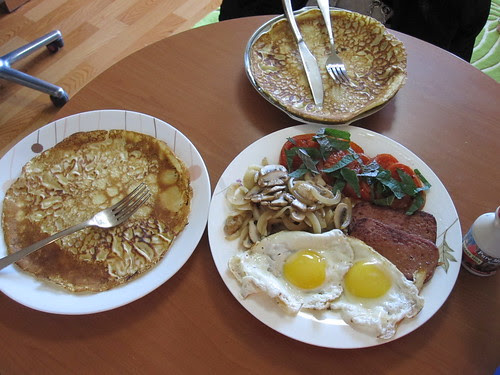 And here's a breakfast that I cooked for wifey and me. Breakfast was one of the first things I learned how to cook, because my parents used to like breakfast-in-bed. The second thing I learned was how to make instant noodles. When we were young, my sister and I were addicted to Maggi 2-minute noodles. They were the highlight of our weekends.

Well it's back to lab work for me now. Blogging seems like a good way to take my mind off things. See you soon!

The shrimp/fish-with-shrimp-pieces burger is actually pretty good =) I don't really like fast-food either but two of my friends have started with "must-have-food-1AM"-cravings so "we" can't be picky -_-;;

Ah yes, we had another student here who I used to go to McDonald's on the way home with. Late at night, around 11pm, we'd be eating burgers. Funny habit.

Hey Lee - it's Brandon! Glad to hear you're eating! Keep up the eating and take good care!

Hi Brandon, nice to hear from you.

Hey Lee, I laugh a lot with your post (Blog-post). I am from Spain(but I am working in a small town between nowhere and good bye in the south of ireland)... and do you know, what "Loteria" means in spanish?... means random!!!, :))....so was quit funny to me, know that the same work in the other side of the world means... fast Food!, amazing isn't it?.

With respect the content of your post, what can i say... the fast food, its like the evil!, it's fast, it's cheap, it's seductive BUT ones you eat it, then will dominate your life forever!!!!... and by the time its not good for the body...