Every couple of weeks, Heather and I head down to the Wondang markets in Nakseongdae to pick up groceries. Hybrid supermarket giants like E-Mart and Homeplus provide convenient one-stop shopping for many people in Korea, but the outdoor markets also have their advantages. Fresh fruits and vegetables are nearly always cheaper in the markets and the ajummas will often give you a little extra produce for free if you ask nicely.
You can also be content with the knowledge that you're supporting the local economy more directly. 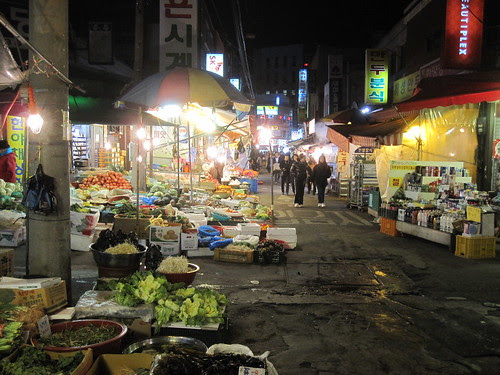 And it's nice to walk outside in the open air. When Homeplus is crowded, it becomes a nightmare just making it to the checkout. But when it gets busy in the markets, there's a more 'vibrant community'-type atmosphere to the occasion. In Korea you can buy fresh cockles in a bag. I never paid them much attention until just the other day, when I noticed that they were still alive. They're sealed in with fresh seawater and you can see them happily filtering away sediment, oblivious to the gravity of their situation. 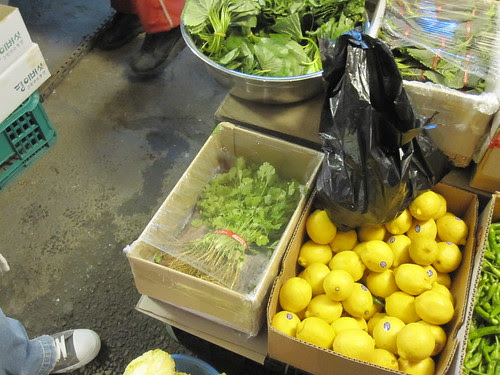 And this took a long time coming. The box in the middle has fresh coriander for sale, also known as cilantro. It's not very popular in Korea and is nearly as hard to find here as the mythical lime. The first time I ever ate it, I remember being a little turned off by the flavour. But over time I got used to it and now I can eat it with just about anything.

Apparently it's popularly disliked to the point where there are anti-coriander Haiku contests. 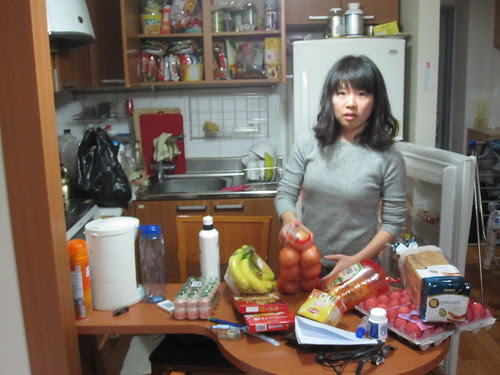 Our dormitory room now has noticeably more food than before I was married. There's something satisfying about coming home with a whole bunch of groceries and sorting it all out.
We eat breakfast together every morning and take turns to prepare it. 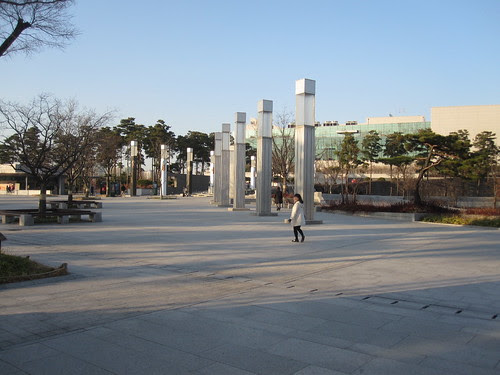 When my dad and brother were here last year, they visited the National Museum of Korea, which I hadn't been to. Heather and I decided we should go and check it out. It's right next to the Ichon subway station on line 4. 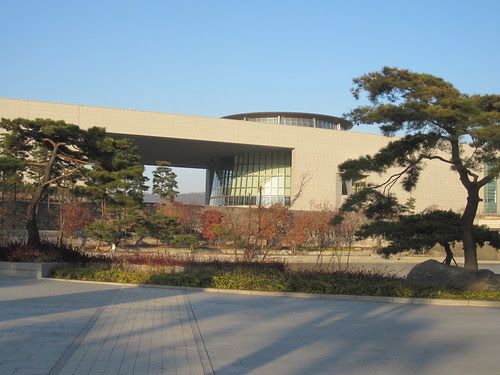 The building itself is quite nice, surrounded by native trees and a large pond. Behind the building is a good view of N Seoul Tower, which used to be called Namsan Tower. 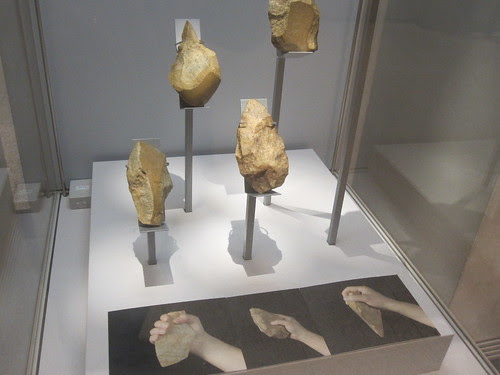 The museum is large and it would take a full day to see everything on display. We walked around without much of a plan, beginning with the paleolithic era exhibits. The Korean peninsula has been inhabited since prehistoric times, with our early ancestors wielding stones like the ones in the photo above. They're called 'hand axes' and were probably used for meat-related applications. 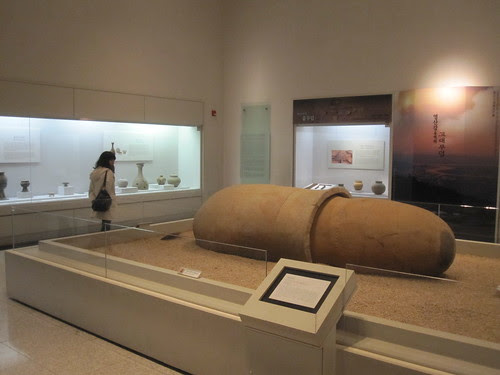 This cigar-shaped contraption is an example of an ancient stone coffin, which were only used by people who could afford them. The tombs of Korean nobles consisted of large mounds of earth, which later become covered with grass. The more important you were, the larger your mound would be. 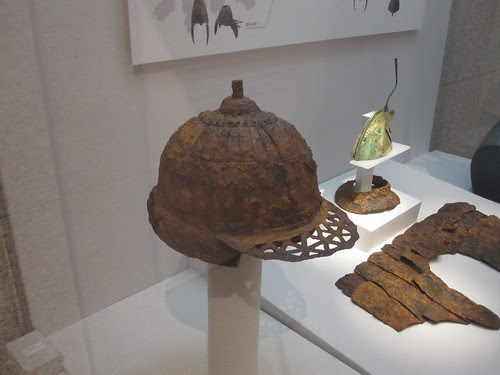 And I believe this is a bronze-age baseball cap. I've been trying to get into the sport, but it just doesn't have the same appeal for me as soccer or tennis.

But I do find the subtle tough-guy mannerisms of the baseball players on TV to be quite entertaining. They chew gum ferociously and never smile. 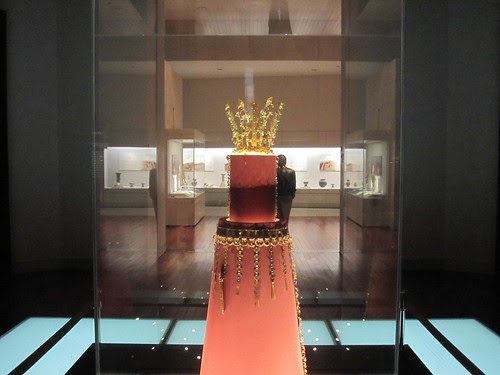 One of the highlights of the museum is this Shilla gold jewellery set, which was worn by members of the ruling dynasty. The belt has symbolic pendants hanging from it, and there are jade beads woven into the crown. It's considered one of the best examples of ancient Korean gold craftsmanship. 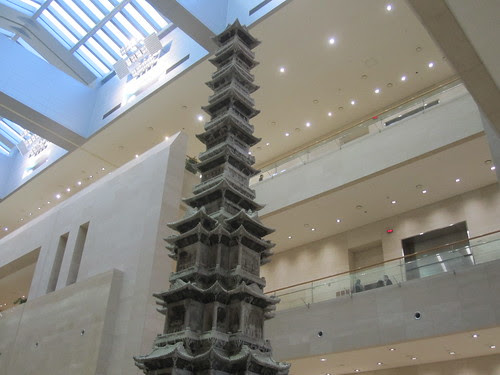 The building is large enough to accommodate this full-sized stone pagoda. I think it's an original, because there are visible signs of erosion on the lower levels. Each level of the pagoda symbolizes a higher state of consciousness. 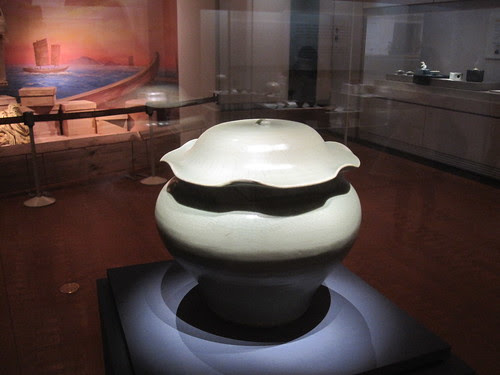 Most of the exhibits in the museum are pots or ceramics of some sort. Koreans were well-known for their expertise with celadon, and helped to spread the craft throughout Asia. Ceramics last for a long time, and you can see examples from every era in Korean history. 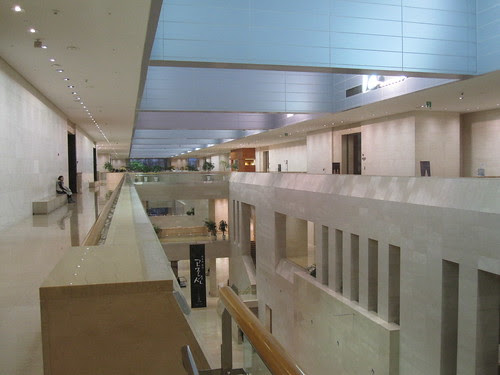 The museum itself isn't too bad. I'm not particularly interested in ceramics, which constitute about 90% of the exhibits. I'd recommend visiting the museum if you have a particular interest in Korean history, but otherwise there are plenty of other things to do in Seoul if you're on a tight schedule. The Korean Folk Village is probably a better option. 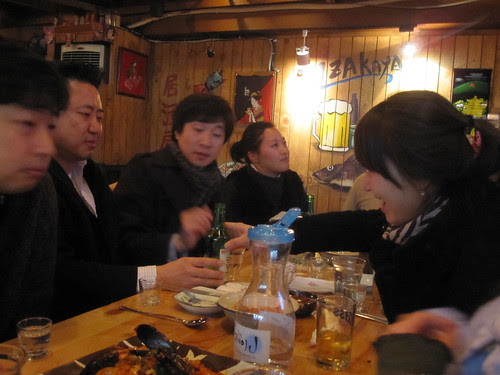 I haven't been able to go to Toastmasters much recently, due to a busy schedule. The last speech I gave was on Arisu, which is the name for Seoul city tap water. For those of you who are living in the city, the regular tap water in the vast majority of households is safe to drink. The government website has more information on the specifics. It tastes a little bit funny to begin with, but in the end it's healthier, cheaper and better for the environment than bottled water.

Give it a try sometime!
Posted by Lee Farrand at 4:08 pm

I've been wondering about that tap water for some time now, since a Korean told me not to use the unfiltered water for anyting except for showers.
I thought it sounded weird since Koreans should be used to their own water (and bacterias in it).

I've been drinking it for quite a few months now.
From the Seoul Metropolitan Office website: "Although an immense amount of money goes into supplying city water, irrational fears prevent many citizens from consuming it."

You can do it Moa, drink!

Anonymous said...
This comment has been removed by a blog administrator.
3:56 am

I hate cilantro with a passion!