My merry Christmas morning started off in the Wondang markets of Nakseongdae. While my 5-months-heavy wife prepared our dwellings for guests, I set off for fresh fruits and vegetables, feeling all of the ancestral vibe that comes with undertaking a hunter-gatherer task. Along the way I stopped by a small sundae house for breakfast.
Korean sundae could best be described as sausage from the Land of Mordor. It has dubious origins and looks menacing. But like young Frodo, I can't help but be drawn back for more. 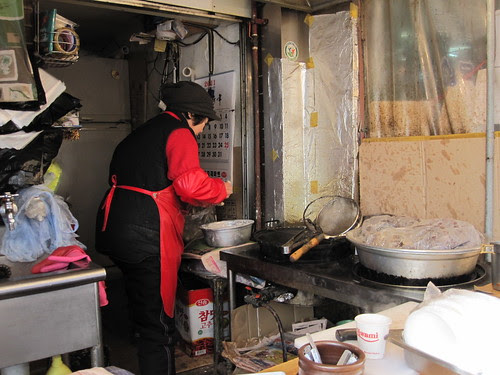 Accompanying the orcish sausage of death, at one's option, is the presence of offal. I could waffle on and on about offal, but I'll refrain. Let's just say I'm a guilty fan. 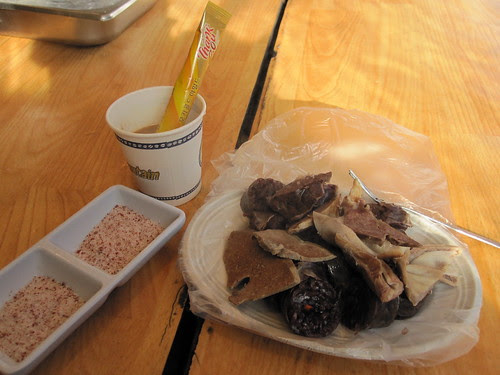 Would you like some instant coffee with your offal? Yes please!
This friendly ajumma offered me some free instant coffee, for the frosty weather. She even ceremoniously stirred it the true Korean way. That is, by using the instant coffee packet as a stirrer rather than a spoon. Particularly uncouth ajosshi these days also use their index finger.
But a real man's man, an Australian man, deals not with these petty triflings. Clumps in beverages are nothing to worry about, unless they're a stonefish or a trapdoor spider. 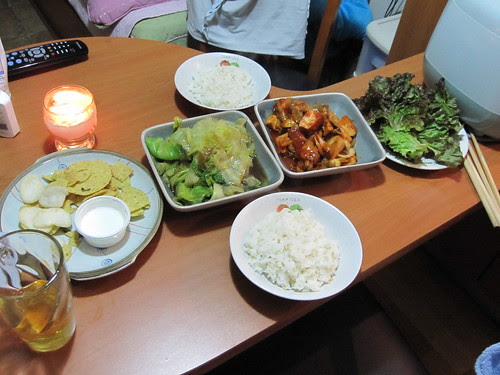 Christmas came and went, with laughter, merriment and good cheer. Good friends came over and we relaxed enjoyably. Fortunately I have a clear memory of the day, because I failed to take any photos of the event. Many a Christmas past has been marked with amnesia the next day, to be further confounded by inexplicable photos of blurry smiling teeth on one's camera.
What we need is a morning-after pill that brings your memory back. In such events, the Korean's say "Pillum ggeungyeosseo" (Film's gone!)
The photo above is a portion of the plentiful leftovers that we managed to survive on until New Year's Eve. It was a fine week of cake, sour cream, smoked cheese and wine.
For breakfast. 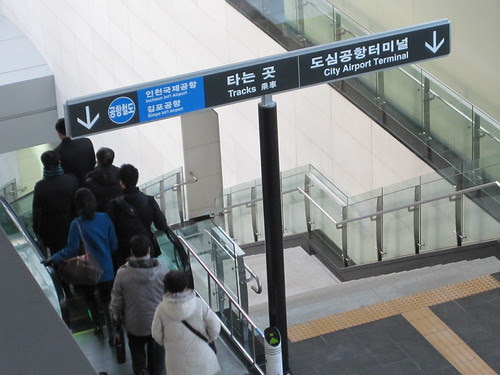 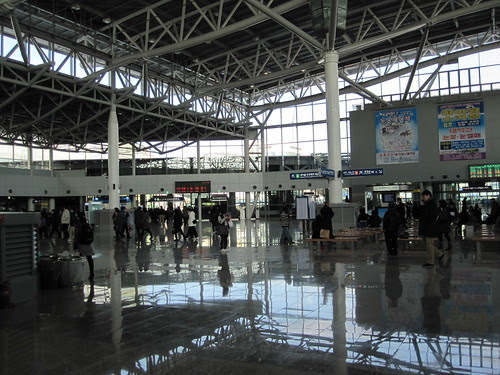 We went to Busan for the new year, to see Heather's tribe. Upon alighting from Busan station, I soon realised that they (the Korean race) had upgraded this station too. Now they have quite a snazzy room where commuters can dwell and marvel at the intricate latticework supporting the roof. It seems that every time you turn around in Korea, something has been knocked down, and something else has been built.
But even though I was a long term resident of Busan for 2 years, the city mayor failed to inform me of these plans prior. With a gruff sigh, I hauled our luggage to the nearest bus stop, thinking "This is No country for old men (like myself)." 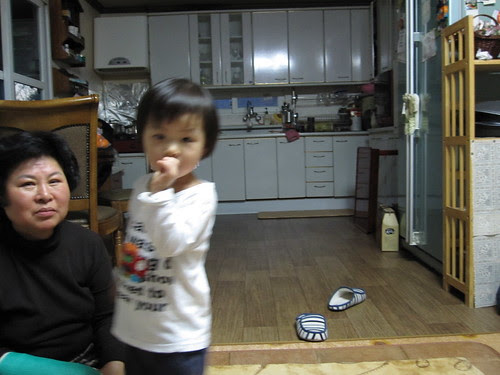 Who's this little girl? That's Heather's niece, Ji-Woo, who is now two years old. The last time we saw her, she was still in the gelatinous stage, unable to maintain uprightedness without adult arms of support. But times, they are a-changing. Now Ji-Woo is running around and expressing various advanced human emotions like 'pleased' and 'unapproving.'
When she first came into her grandparents room, she quickly and correctly identified me as a non-usual person of acquaintance. Her response was to stand quietly and stare at me from a safe distance of approximately two metres, blankly observing and forming an assessment of this new creature in the living room. Minutes passed. Meanwhile the elder members of the Korean tribe attempted to sooth her by saying "That's Uncle Lee, Ji-Woo. Say hello to Uncle Lee, Ji-Woo." 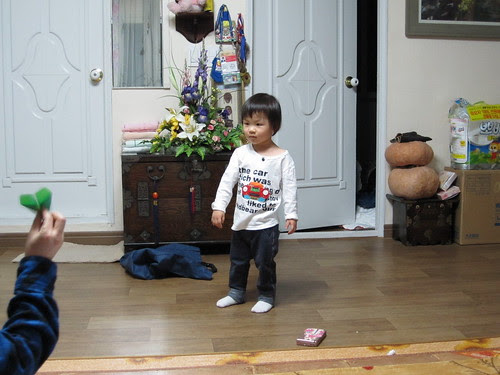 Perhaps we can soften her up with a little paper plane frivolity, we thought. The first paper plane, although aerodynamically challenged, was a huge hit. Before long, paper planes were being folded on an industrial scale, as we attempted to capitalise on this newfound area of mutual interest. 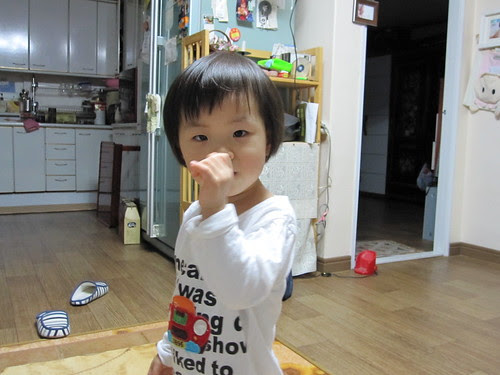 Those efforts resulted in Ji-Woo reducing our personal safety-distance gap to a single metre.
I was honoured. Although she can only say 'Omma,' 'unni' and various kinds of gurgles, her reduction of the safety gap was a clear message that I was well on my way to being classified as a familiar person. Furthermore, she was happy to observe me without the safety of halmoni by her side. 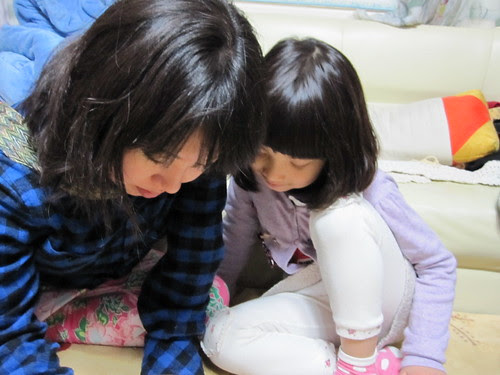 Next we entertained Ji-Ye, her older sister. Ji-Ye is kiddologically more advanced than Ji-Woo. That's probably not a real word, but this is an unusual area of study for someone like me. 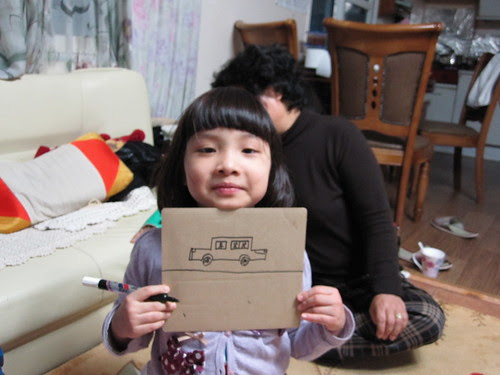 Ji-Ye was much easier to break the ice with, because she remembered me. My Toastmasters skills were particularly handy though. It wasn't long before she had drawn a picture, with me in it. I'm apparently representable by a large squashed spider on the driver's side window. What the...? Okay, so I was lining up for another shot of Ji-Ye's drawing when up popped little Ji-Woo, happily accelerating into new levels of closeness. She'd closed the distance gap to within bobo-distance.
I felt like I'd received a promotion. 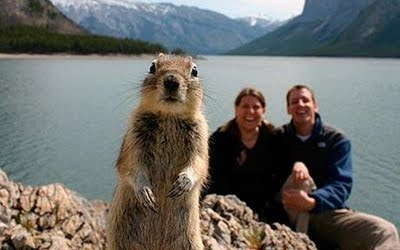 That particular moment reminded me of the gatecrasher squirrel. 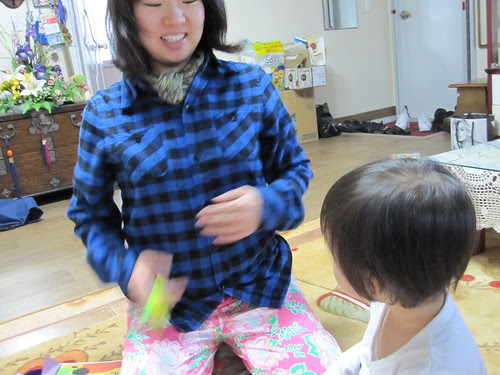 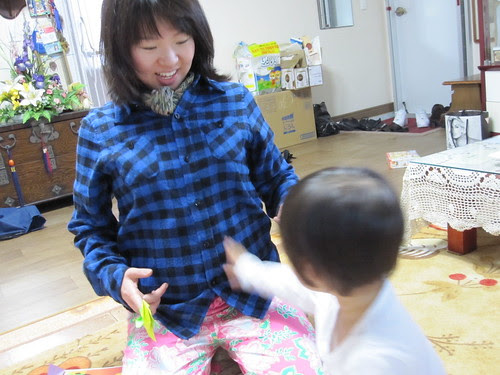 With Ji-Woo granting me official diplomatic recognition, I no longer became the focus of reserved wariness, and she soon turned her attention to Heather's bulging belly. Ji-Woo can understand some simple nouns like 'grandma' and 'baby.'
When Heather pointed at her stomach and said 'baby,' little Ji-Woo's eyes lit up in some kind of profound acknowledgment. Then she reached out and put her hand on Heather's stomach and kept it there. It was truly fascinating to watch. 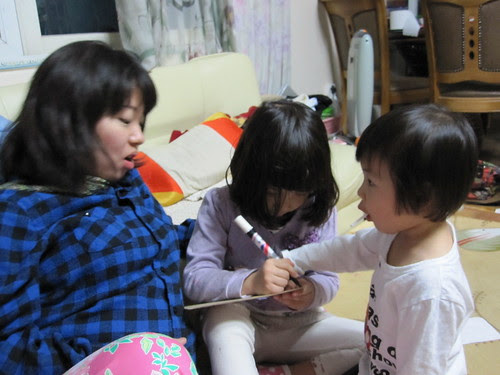 Between gurgles and squeals, we socialised endlessly. While Ji-Ye's primary focus was drawing pictures of family members in various modes of transport, Ji-Woo was more interested in picking things up and staring at us, as if for some kind of explanation. She also enjoyed pointing at things, to check that we had seen them.
"Yes, it's a flower. It's a pretty flower." 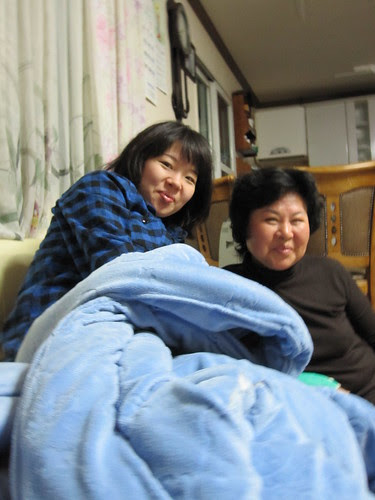 This photo of Heather and her mother was taken by Ji-Ye. Pretty good for a seven-year-old. 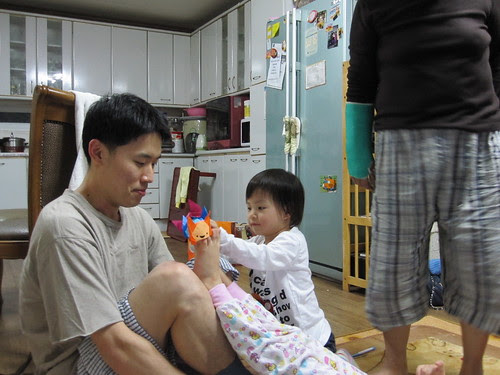 The next morning I was promoted to a fully fledged member of the tribe, now recognised by all those of pre-school age and lower. I took my new role seriously and did my best to keep them entertained and amused. In the photo above, we're conducting paper-puppet theatre using Ji-Ye's toes. I put together most of the dialogue, which consisted almost entirely of greetings. Meaningful dialogue is of secondary importance to enthusiasm, if you have an audience that's easy to amuse.
This past weekend I realised what a precious thing it is to have a good family. My older sister, Jo, now has a baby daughter, and my younger sister Sue has just given birth to a son. The next generation in our family are now emerging, and I'm looking forward to an exciting year of growth in many ways.
Posted by Lee Farrand at 10:14 pm

Yeah, the airport express to Seoul officially opened up in late December. Signage seems a little spotty in some areas, but you'll get to where you're going.

Thanks Chris! Nice to know.
I'll be heading that way later this week.