If I had to choose between really hot weather or really cold weather, I'd probably choose the former. The main reason being that it's nice to hang out in the street under the shade of a tree. Luckily for us though, Korea has four seasons, as every Korean will tell you. 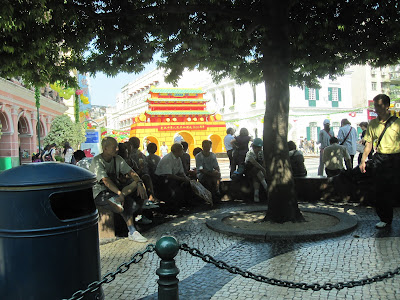 The weather in Macau is pretty warm all year round. There are a lot of gathering places like these, where the locals come to sit and talk to each other. It's funny how a location's weather can influence the demeanour of the people. Most Australians from Darwin that I've met are slow-moving and very relaxed, which I think is in part due to the humid weather all year. 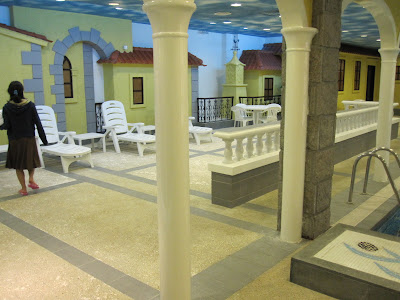 Luckily our hotel had a pool that was completely empty. Most of the patrons were busy gambling. 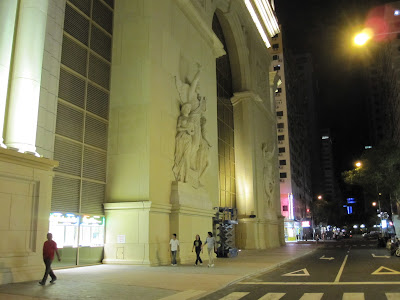 Then it was time to go back to the L'Arc Hotel, which you may remember was recently opened by Peter Ng from Adelaide. The L'Arc is probably a billion dollar venture, complete with hundreds of rooms and a large casino. Peter had told me he was opening a new place in Macau, but when we found it, we were a little awestruck. Those statues are complemented by giant bronze horses on the outdoor suite level. 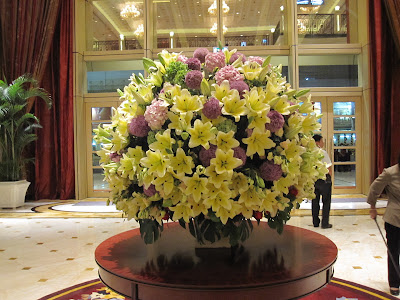 In the lobby was this large floral arrangement. All the flowers in the hotel are alive, which I confirmed by curious inspection. There's a lot of money flowing around in Macau, and the L'Arc stands out as one of the more opulent hotels. 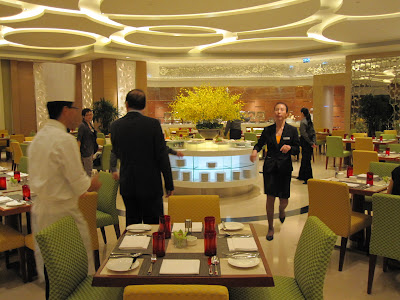 We had a free dinner at the L'Arc buffet restaurant. I never like to ask old colleagues for freebies, but I'll take a free dinner anytime. Especially when I have a hungry newly-wed nibbling my sleeve. 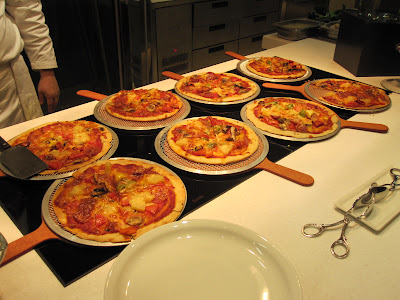 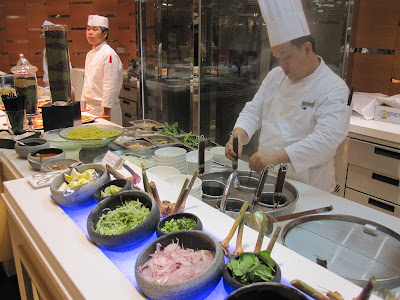 And of course the buffet had everything you would imagine at a place like that. The plump chef on the right made an excellent laksa. Better than mine, and I've made hundreds. Laksas are easy to make well, but hard to make perfect.

I have a feeling that they'd be really popular in Korea, if you marketed them to students. 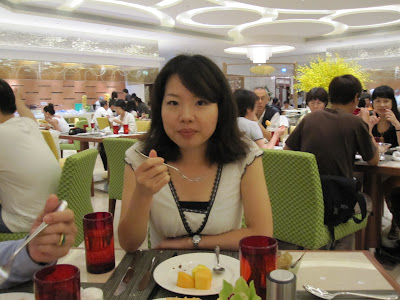 Here's Heather, enjoying some desserts. Peter came and ate with us, but he was a busy man and had to leave quickly. He offered us a free stay at the L'Arc, but we politely declined.

I told him he has a nice hotel. 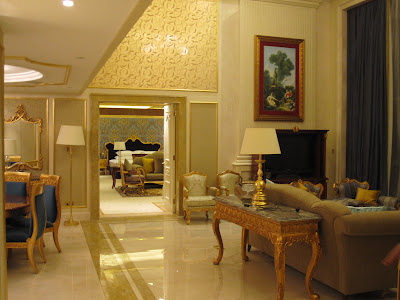 Then Ron took us around with his magic key and let us look in the presidential suite. Ron is our old friend from Busan and was working with Peter there as well. Now he's the director of rooms at the L'Arc, and always has interesting inside stories about hotels. He's also very good at pointing out minor blemishes on things like marble and carpet, which normal people can only see after staring long and hard. 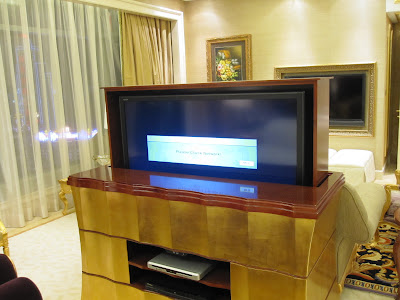 The presidential suite at the L'Arc has multiple bathrooms, a separate kitchen and entrance for the butler, and flat screen TVs that can be summoned from motorized cabinets. As you can imagine, it costs an arm and a leg to stay here. The price wasn't finalized when we were there, but you're looking at around US$20,000.
Per night. 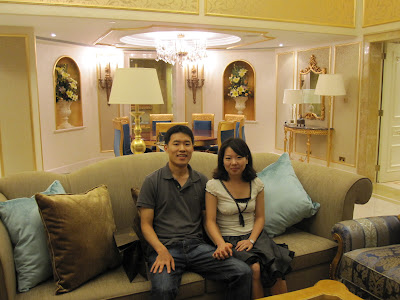 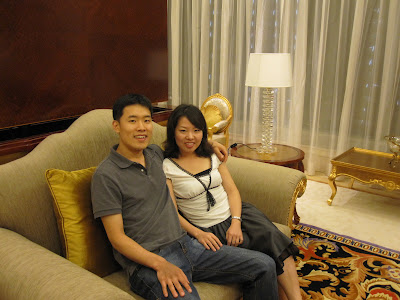 And look, it's me and Heather in there. If I taught English at CDI again for a year and didn't spend anything, I could pay for one night. 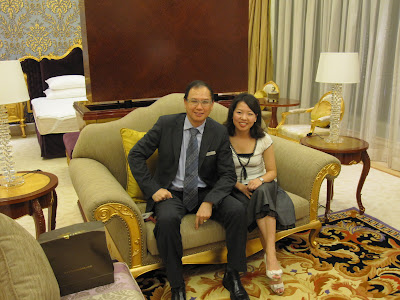 And here's our good friend Ron. He's a fun person to know in this part of the world. 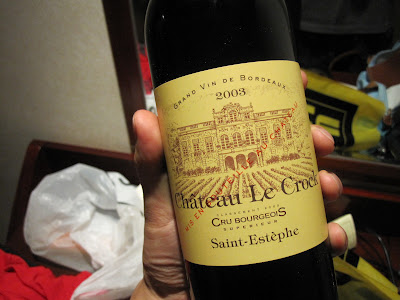 Peter gave us a nice bottle of wine that night. If you're heading to Macau and you have money to spend, try heading for the L'Arc hotel. There's good hospitality there. 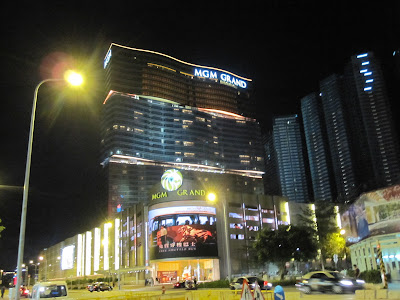 Then we went out to the MGM Grand. The L'Arc is the biggest hotel in Macau with around 2000 staff, but there are still places with bigger casinos, like the MGM Grand, Wynn's and The Venetian. 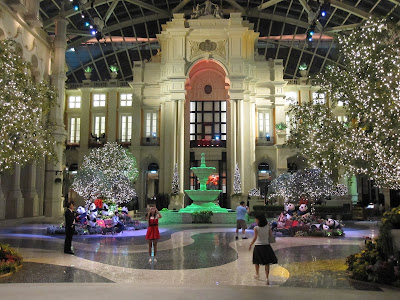 This is the back entrance to the MGM Grand. It's like they've created a fantasy Disneyland in most of these places. The reason they do this is for psychological purposes, it helps to get people spending more money. But don't let that stop you admiring the pretty lights. 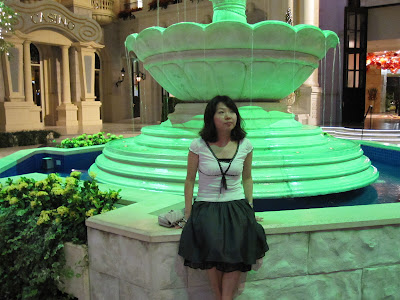 It's pretty hard to remain unfazed by all of the extravagance in Macau, but Heather did a pretty good job. That's why she's the right one for me. 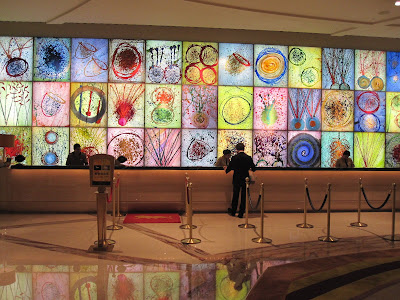 This is the reception desk. I guess they ran out of money and got kindergarten kids to put the finishing touches on the wallpaper. 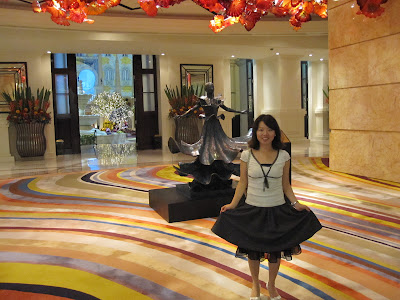 Hey look, they even made a statue of my wife. 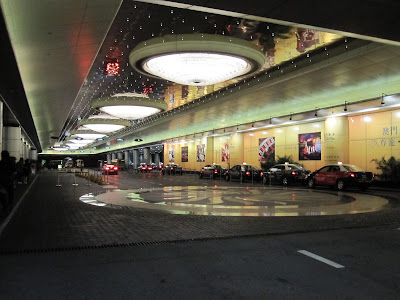 And if you arrive by car, this is what the valet reception looks like. More like a spaceport than a hotel. If you're tempted to gamble a lot in a nice place like this, just remember why they can afford to build at such epic proportions in the first place.

But I did 'accidentally' end up gambling a little. You only live once. 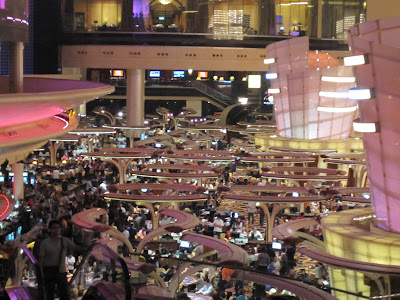 And this is what the Sands Casino looks like. Hundreds of tables, operating continuously throughout the year, with smoking patrons rolling dice and flipping cards. The free entertainment was nice, but they make terrible cocktails here. 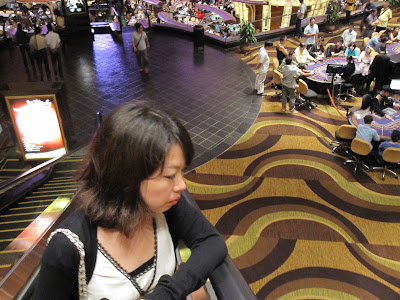 And here's Heather observing the commotion below. She doesn't think much of table games, but took a liking to the slot machines. She likes the pictures that flash up, and her favourite one is called Geisha. My favourite machine is called Double Dolphins, because I like marine biology, and it's remotely educational. Well, not really.

lol yes I didn't see that machine there... I'm guessing it's because it gives away too much money with the excessive shrimp buckets feature.

The art behind the reception desk is by Dale Chihuly and would have cost a small fortune!