The Venetian Hotel complex is one of the most famous landmarks in Las Vegas. Its counterpart in Macau is perhaps less well known, but after recent developments is now larger and more impressive. It is now the largest hotel in Asia and the fourth largest building in the world by area, with floor space covering 980 square kilometres. 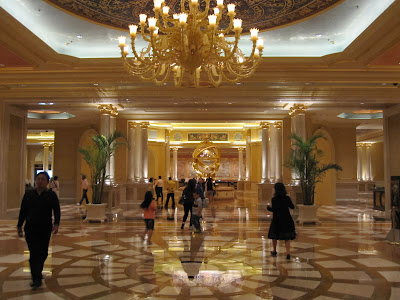 You don't get a real feeling for its scope until you start walking around inside. Every inch is covered in marble or renaissance artwork, and it's very easy to feel a little disoriented. It's like walking into the enormous palace of a middle-eastern oil baron.

Or so I would imagine. 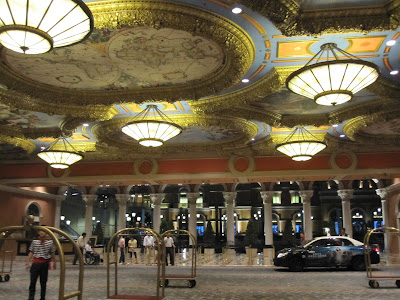 There are multiple bus stations that serve the complex, and 250 elevators inside. Weaving in and around the hotel is an artificial canal with gondola rides. 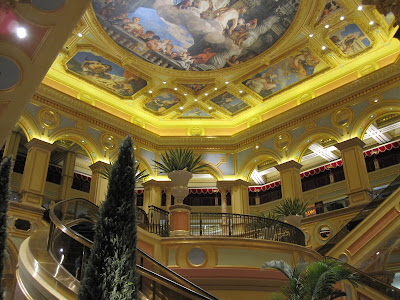 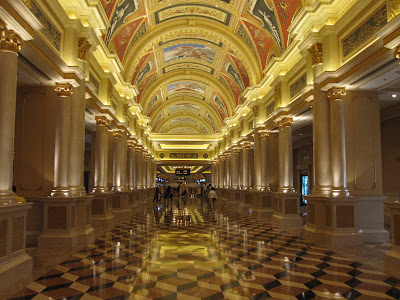 Some of the interior seems like it came straight from a story book. What would really be impressive though, is if the Venetian were a public library instead of a casino. 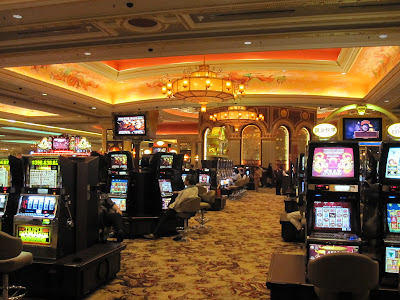 There are 3400 slot machines in the Venetian. In South Australia, the most profitable machines can make AU$100,000 profit per year for the owners. So when you do the math, you get an idea of the kind of money that's going through this place. 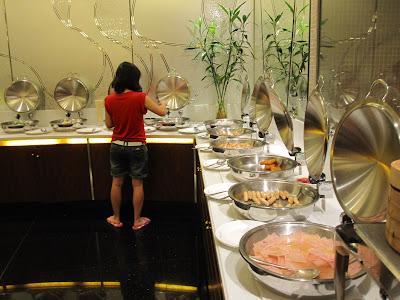 You'd be forgiven for thinking that food should be cheaper with so much gambling revenue floating around. But food for the common folk in Macau is around the same price as Hong Kong, but generally not as good. It's all edible, but there just seemed to be a lack of creativity and passion in the dishes. I normally get excited by buffets, but this one was a bit of a non-event. Boiled sausages are not really a dish in their own right. 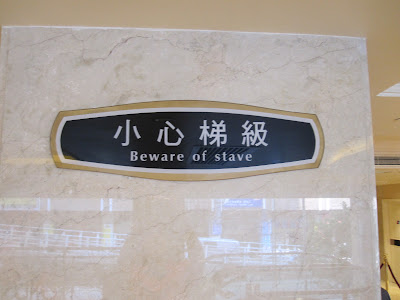 If anybody can read Chinese, I'd be interested to know what 'staves' are. This sign was near a stairwell. 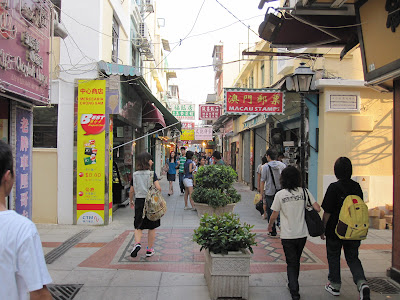 In between wandering the casino halls, we did try to get out and see more of regular Macau. The suburbs are nice enough and the public buses are fairly easy to use. Interestingly, they use an honour system of payment, where you get on the bus and drop the bus fare into a large box. The bus driver is never watching how much you are paying. 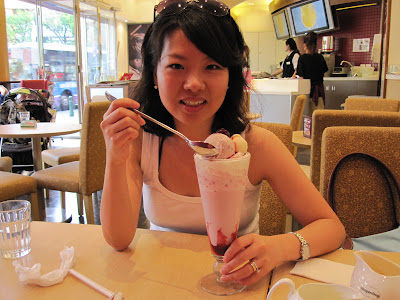 And here's Heather on the brink of devouring 3200 calories. These days we don't really watch what we eat, but I've heard that once you hit middle age, your weight starts catching up with you.

Best to enjoy one's youthful metabolism while it lasts. 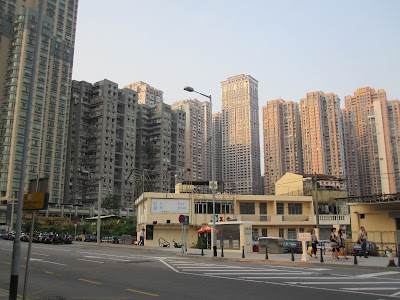 These are apartment blocks of workers in Macau. The city employs thousands of migrant workers, normally from South East Asia, to build the casinos and attend to the guests. From what I've heard, the working conditions for many of the workers are not that good. What they need here is some kind of modern day Robin Hood. 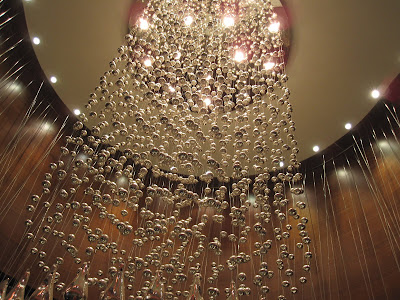 Then, somewhat unbefittingly, we headed back to the City of Dreams. The complex consists of a Hard Rock Casino, a Hyatt, a Crown Casino and a few other thingies. 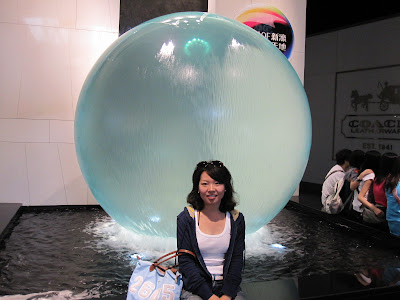 The large glass ball behind Heather is an advertisement for the 'Bubble Show', which occurs every thirty minutes inside the complex. You need to go to the second floor to get a ticket, but its completely free. 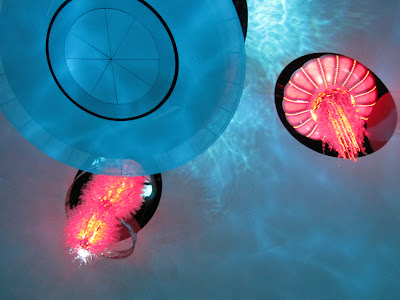 The Bubble Show is in a large indoor dome, similar to a planetarium. It has roof sections that open, and large dangly things can pop in and out. Technically speaking. 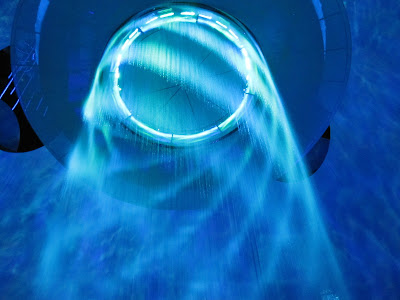 In the middle was this huge UFO-like device. The water is sprayed downwards with computer precision to form special patterns in the light. 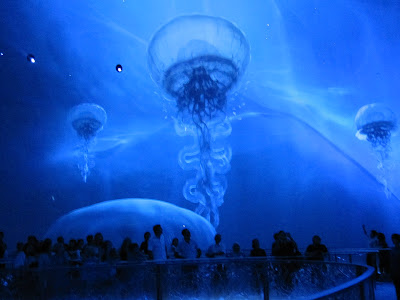 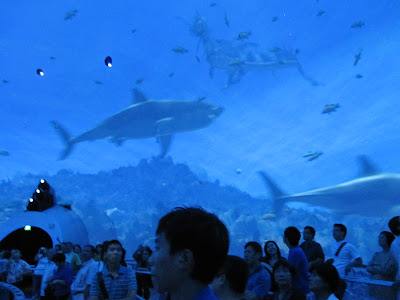 And the whole dome is one huge projector screen, able to plunge the audience into whatever environment the CG gods deem appropriate. 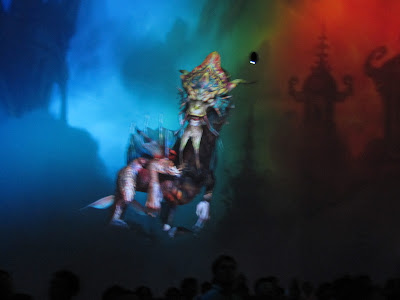 There was a loose storyline about a jade dragon deep beneath the ocean. And the dragon had a bubble that did something. And a whole bunch of epic things happened right where the casino was later built. So that's why this particular casino is more exciting than the other ones, where no such epic dragon battles occurred. 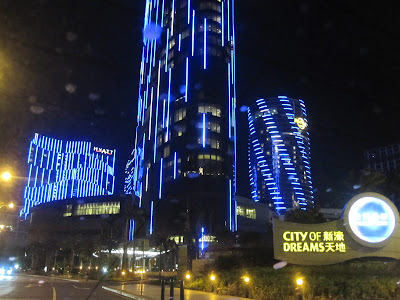 Parts of Macau are like a fantasy land. It's hard not to be awestruck by the sheer scale of everything, but I did sense undertones of greed and exploitation lurking behind the velvet carpets and marble walls. It's a nice place to visit, but somehow I wish things were a little different here.

Anyway, now we have one more Macau post to go, and then we're off to good old Adelaide!

hmmm....the sign indicates beware of the staircases/stairs,if i am not mistaken.