One of Macau's most famous landmarks is the remaining facade of a cathedral known as the Ruins of St. Paul's. Originally Asia's largest cathedral, all that remains is the southern entrance, with the rest being destroyed by fire a couple of hundred years ago. The Macanese government set up a restoration effort in the 90's and now it's listed as a UNESCO World Heritage Site. 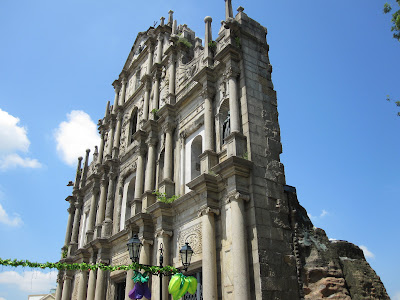 The structure has intricate carvings depicting different religious events. It emanates an impressive contrast, lavishly decorated due to the riches of the time, but now an entrance to nothing but empty sky. 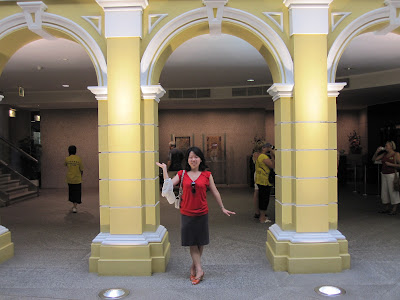 Nearby is the newly built Museum de Macau. In general I'm interested in museums, but some are much better than others. For some reason I usually get pretty bored in craftsmanship or maritime museums. 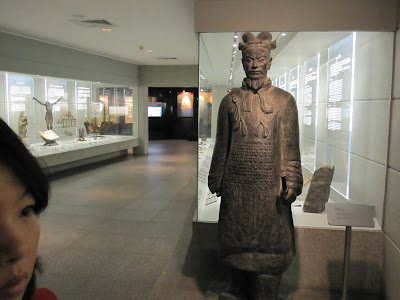 The museum begins with the history of the Portugese settlers meeting the local Chinese inhabitants. The first explorers of the time often encountered kingdoms who, at that point, had only heard stories of other countries far away. It must have been like First Contact in Star Trek. 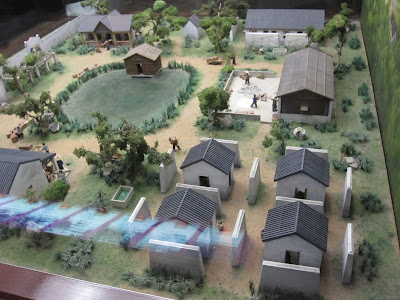 The photo above shows a model layout of an old fireworks factory. The Chinese invented gunpowder and Macau was once an exporter of fireworks to the West. In the middle of the compound is a lake with a hut built over it. This was where they used to store the more volatile chemicals. On the bottom right are the packing facilities, with concrete blast walls.

I think I would have chosen to be a fisherman in those times. 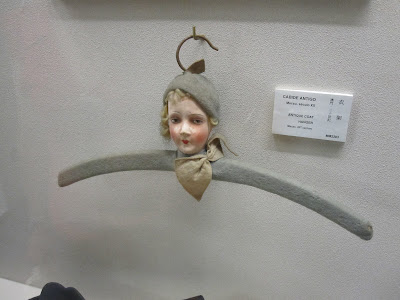 In the photo above is the world's scariest coat hanger. The irony here being that a lot of time and effort probably went into making this thing for a small child, only for that same child to be terrified of opening the wardrobe. 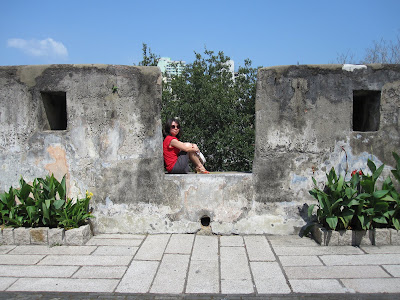 Here's Heather sitting in one of the openings on top of the museum complex, which was originally a smaller fort. The openings were for cannons to fire upon unruly neighbours. 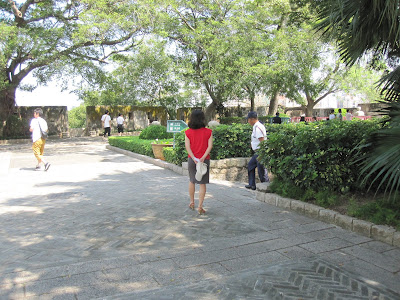 Semi-tropical areas like Macau get a lot of sun, which stimulates the rapid growth of foliage. The museum grounds are typically Macanese, with a nice blend of faded stonework and greenery. 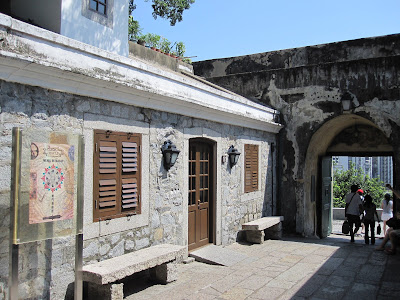 You don't see too many stone benches around the place these days. Which is a shame really, because they tend to last a few hundred years and never need to be painted. Perhaps when I retire, I shall become a stonemason.

And perhaps not, also. 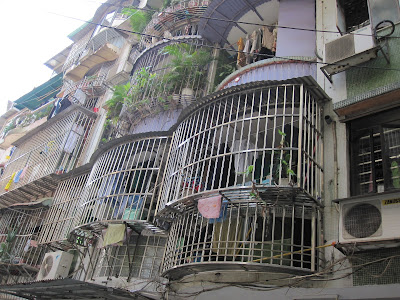 We left the museum grounds and went for a winding walk to try and find the main road. A noticeable difference between the apartments in suburban Hong Kong and those in Macau are that the Macanese ones have cages around them. Good for security, but can be a problem if there's a fire. 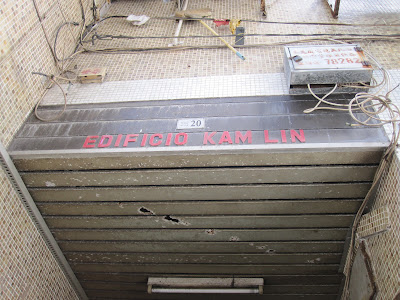 And here's an interesting mix of Portugese and Chinese in a name: Edificio Kam Lin. 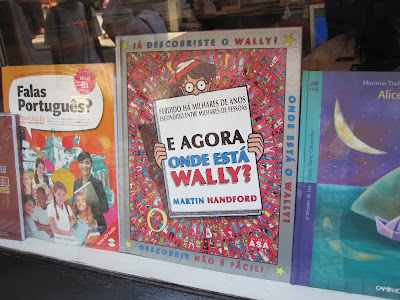 It seems that the pleasure to be derived from spending hours finding a miniscule stripey man in a crowd knows no borders.
When I was young, some other kids in the school library had already circled the location of Wally on all the pages, in a bright green highlighter. I remember being somewhat displeased at the accelerated reading experience. 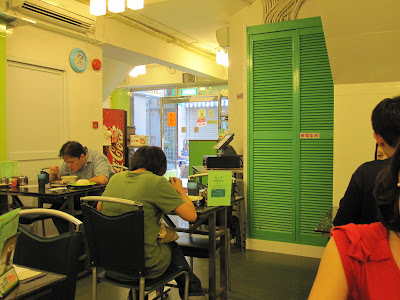 After a fairly pleasant walk, it was time to eat. When travelling, Heather and I usually try to find small restaurants that are popular with the locals. A good trick is to buy something at a store, and then ask the shop attendant to recommend a good local place to eat. 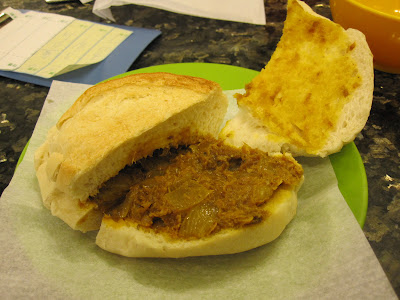 For entree' we had a fish curry sandwich. Three of my favourite foods, all in one. 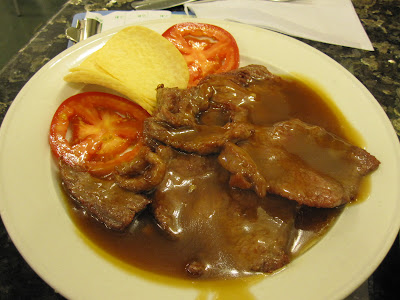 And in the photo above is ostrich meat. More interesting than the fact that they sell ostrich meat, is that they garnish it with Pringles on the side. Quite common in Macau.

I'd never eaten ostrich before, but I've heard it's popular in some places. It doesn't taste like giant chicken, as one might expect. More like a mixture of pork and beef. 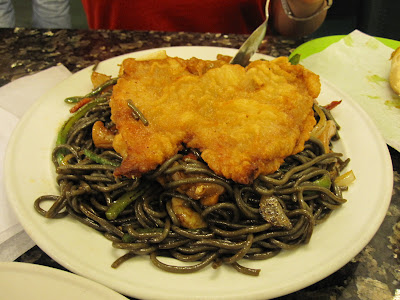 And we also had spaghetti in octopus ink. Octopus ink is slightly salty and tastes nothing like real ink, which you may have had the misfortune to taste if you chewed your ballpoint pens in middle school. The flavour was pretty agreeable and had subtle seafood undertones. On the top was a battered fish fillet. 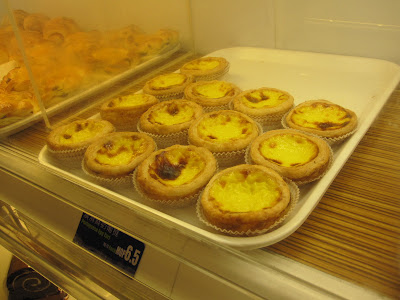 Probably Macau's most famous delicacy are these egg tarts. I had read about them in a tourist brochure and was eager to try them. Even though I don't like sweet things.

Well, they were alright. 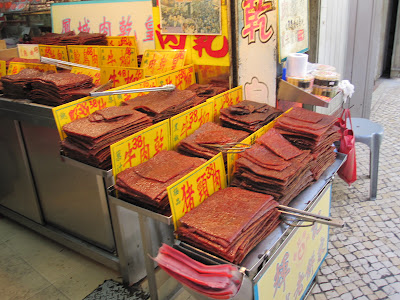 And I guess Macau's second most famous delicacy is meat jerky. I say meat jerky because it's made from all sorts of things from the animal kingdom. Best not to ask. 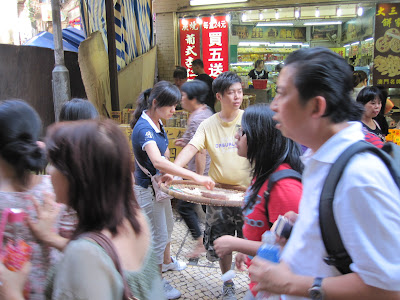 That guy you can see in the middle was one of a number of vendors giving out free samples. By walking from one end of the street to the other and trying every sample on offer, one could easily consume enough jerky to never want to come back. 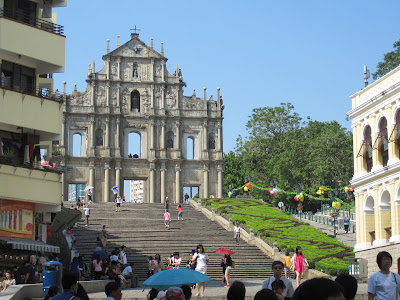 And then we ended up back where we started, looking at the Ruins of St Paul's again. I like it when I find myself back where I started again, and it gives a nice rounded feeling to a blog post. 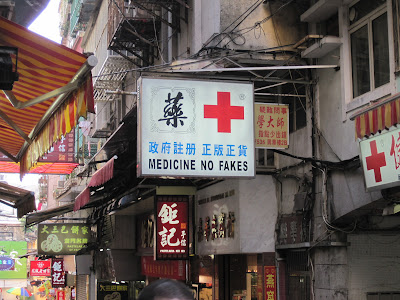 But to take us out this week is a pharmacy sign proclaiming a lack of fake products. Makes you really wonder about the pharmacy next door, that suspiciously has no such disclaimer evident.

Perhaps they just can't read English and spend the days wondering why all the customers go next door.

Well, that's all for me this time. See you soon!