A Night Out with Morning Special

Going to university isn't just about what you learn or what degree you get.
An equally important part of the experience is the people you meet and the friendships you keep. Once you enter the workforce, social rules change, people get married and old friendships sometimes fade into the mists of time. 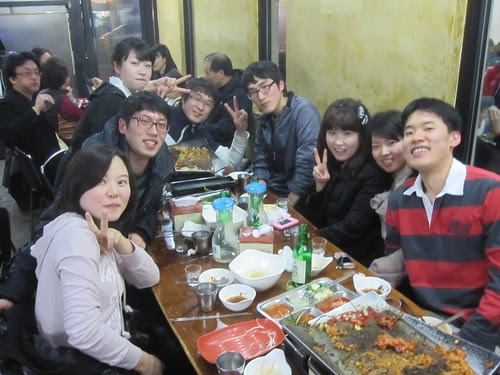 Morning Special was the name of a regular English morning radio show in Korea. When Heather was an undergraduate, some fellow students of hers formed an English speaking club at their university and named it after the radio show. They would get together on weekends and discuss news articles, followed by drinking and socialising in the hofs of Busan. Years later, the friendships that were made through this medium have withstood the test of time. The old members of Morning Special have all graduated and gone their separate ways, but they still meet up when they can.
Recently we met some of the members that have moved up to the Seoul area. We ate barbecued duck at probably the best barbecued duck restaurant in Korea, which is located tantalisingly close to our university subway station. 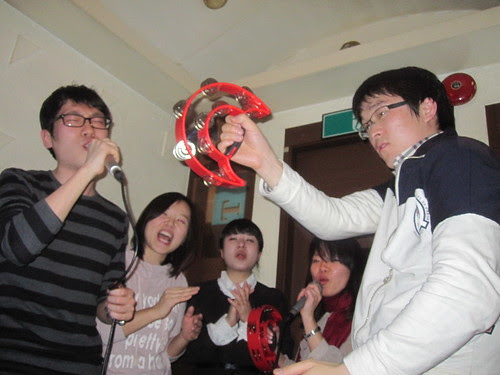 An indeterminable amount of beer and soju later, we found ourselves at the end of a bar-crawl and then a noraebang. Somehow I knew it would happen like this.
One of the responses that comes to my mind in situations like these, was invented by my Polish friend in Adelaide, Damien.
Whenever you ask him "Do you want to get ridiculously intoxicated tonight?",
he often replies "No... "
And then he adds "... but I can be easily persuaded." 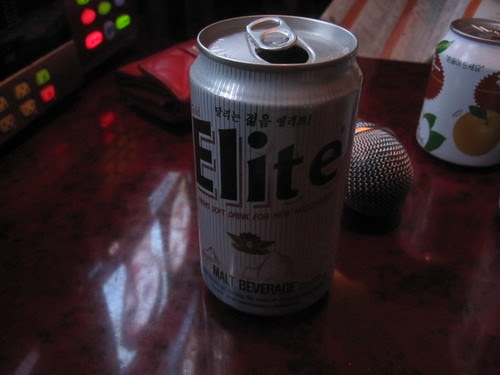 Only some noraebang are licensed to sell alcohol. For the ones that aren't, there's often a discreet supply of under-the-counter beer that can be obtained if you ask the right way.
But the one we went to had a third alternative. 'Elite' is a non-alcoholic beer-flavoured soft drink. For those of you who live in Korea, you're likely to notice the label's uncanny resemblance to Hite, Korea's most popular brew. It tastes exactly like beer, and it took me a long time to determine what it really was. It's manufactured in Hong Kong, exclusively for the Korean noraebang market.
Crafty indeed. 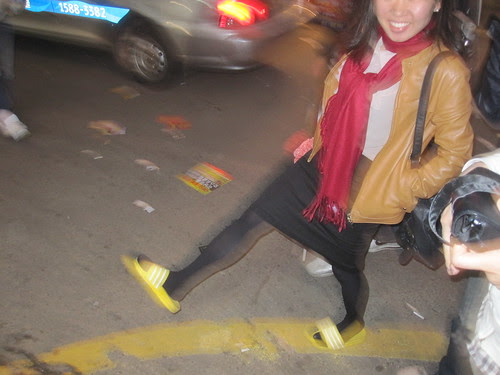 Somewhere in the fog of the night, Heather took off her shoes at a lounge bar and found out later that someone had removed them. Being in the merry mood that she was, she just left the venue wearing the complimentary toilet slippers that were offered by the manager. 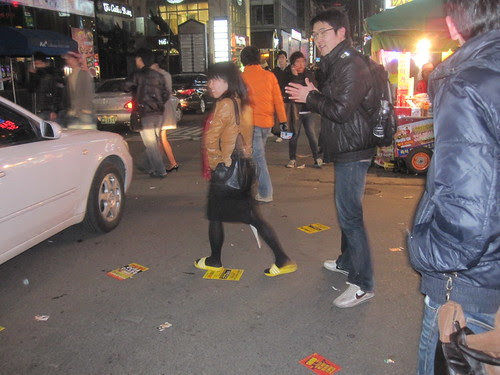 Happily enough, she trotted the streets of Gangnam as a trendsetter, turning heads wherever she went. Her shoes were returned to the venue the next day by the person who took them - another tipsy patron who woke up and realised that the shoes weren't hers.
It happens more often than you'd expect... in Korea.
Posted by Lee Farrand at 11:06 am

And it sounds very much like a good time was had by all.

I've gotten so used to wearing "slippahs" in Hawaii that when I'm back in Korea during the summer I'm tempted to wear them, even to work. Fortunately, people I work with write off my eccentricities as "oh, he's Hawaiian now."

I didn't know if you had an email you could be reached at, but I remembered that you were working at CD, and I was wondering if I could reach you to ask a few questions about some positions there.

(best email for me is richardchoi@u.northwestern.edu )