Rice Protoplasts and a Speech Competition

The new cancer lab is under construction, so I've been spending the days preparing my research proposal and learning about animal cells. At a very basic level, molecular biology is all quite similar no matter what you study. But I've still got a lot of learning to do.
Plant science and cancer are both interesting to me, but I'm getting more intrigued by the inner workings of cancer cells. 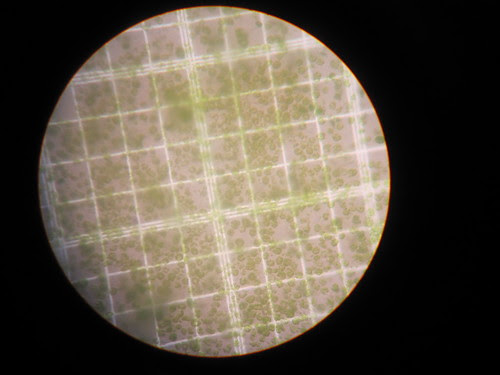 I took this photo when I was working with plants. These are rice protoplasts that I made with Rakshya Singh at Sejong University. Plant cells are different to animal cells because they have rigid cell walls that make them strong. That's why plants are able to stand upright without any bones. But there are special enzymes that you can use to dissolve those walls. That will leave behind little bubbles of plant cells, floating around in solution. They're alive but so fragile that you can rupture them by stirring slowly with a spoon. You can transform the little critters just by adding DNA and increasing the concentration of macromolecules.
The photo above was taken straight down the eyepiece of a light microscope with my handheld camera. The cells are sitting on the gridlines of a hemocytometer, which is normally used to estimate the density of red blood cells. 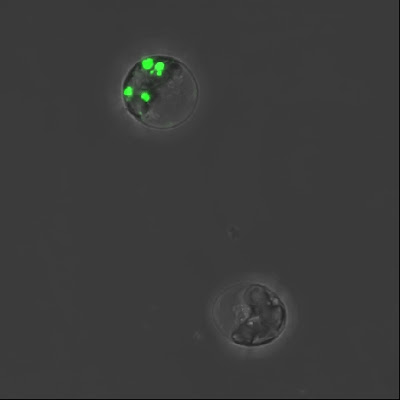 And if you have a champion of a scientific partner like Rakshya to work with, this is what you should see under the confocal microscope the next morning. These are my protoplasts at 600X magnification, with the top one showing fluorescent reporter gene expression.
It's a nice result, but this is not an easy protocol. It will take you 13 hours straight, and if you make one mistake, you just end up with brown goo. If you're attempting it for the first time and needing some help, ping me an email. I've sent out our old biolistics protocol to quite a few biology students who stumbled on this blog. More than happy to help. 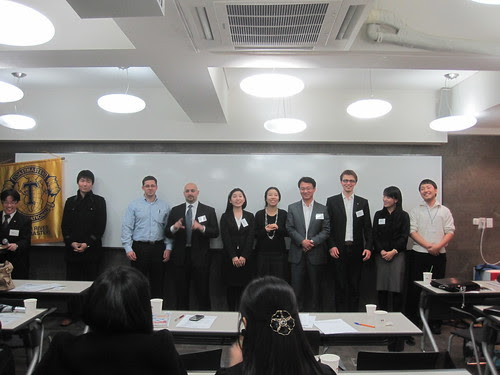 These photos are from the last SRTM speech competition, and have been sitting in my drafts folder for a while now. Nine competitors were up for the challenge and gave speeches on a variety of topics from Spanish love stories to passing interviews. Overall the speeches were quite good.
If you're up for a thrill, try entering a Toastmasters speech competition. I still haven't entered one, due to time and courage constraints.
All in good time. 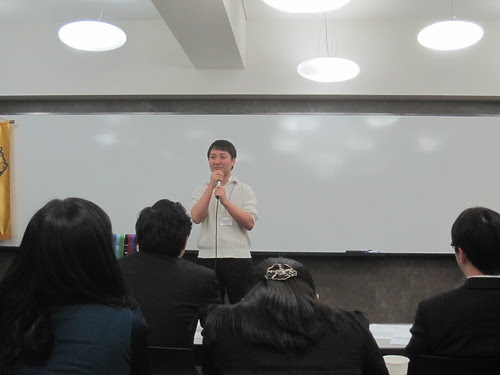 Here's our friend Robert Cha, giving a speech about perspiration. Robert used to run a blog called Korean 1.5, but it's gone into cryostasis. I've filed it under the appropriate heading in the column on the right of this blog. 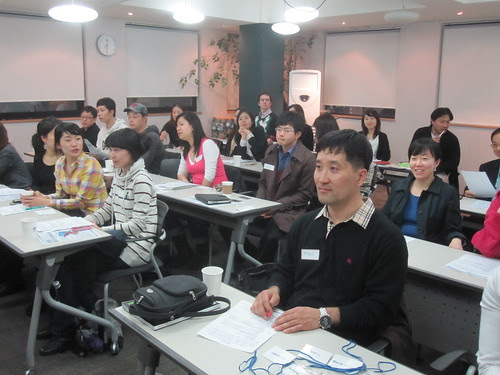 And here's the kind of audience you'll find at SRTM. A wide range of working professionals, all contributing their free time to get better at public speaking. Heather was inducted just last week and is now a full member. 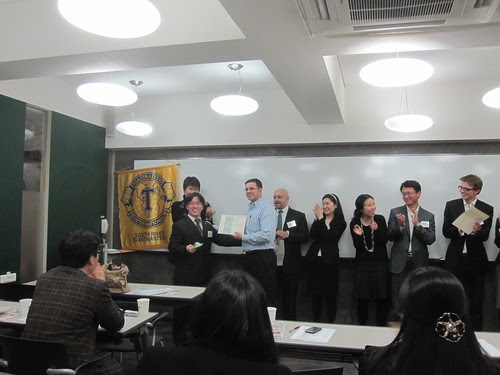 Ron won the competition with his distinct motivational style. He was once a USFK soldier here and now teaches management at Dongguk University. When he's on a roll, he's pretty much unbeatable. Now he's going to represent our club at the national speech competition in June.
If you want to watch one of Ron's award-winning speeches, you can see one here. 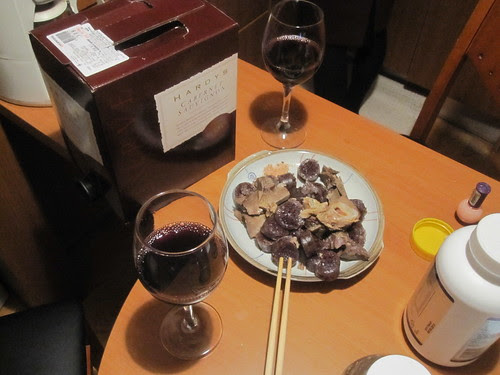 A few weeks back, we bought a cask of Hardy's wine from Costco. It was a nice 5 litre box, which we rationalized was worth buying because it would last a long time and save us money. Three nights later it was feeling remarkably light. One and a half weeks later and I found myself squeezing out the final remnants, before inflating the foil bag with air, much like my old man used to do when we were kids.
You know you're an expat in Korea when you're sitting down drinking cask wine while eating sundae. Sundae is blood sausage, but it doesn't taste like blood and only remotely reminds me of a sausage. In Busan, the locals prefer to eat it with gochujang (soybean chili paste), but in Seoul they eat it with salt and pepper. But the best thing I like about sundae in Seoul is that they sell it with sizeable chunks of boiled lung, complete with vascular tubes and observable alveoli. There's a whole anatomy lesson sitting on your plate, if you feel compelled to explain it to someone. Korean wife these days is learning a lot more than she cares to know.
That's what happens when you marry a geek.
Posted by Lee Farrand at 7:58 pm

Oh, it's lung? I thought it was kidney or liver or something... tried to ask an ajumma who pointed towards the chest-area as explanation :P

From the looks of things you've got a lot going on. I have lived and worked in an Agriculture area and have seen plant scientists develop sturdy cotton stalks that will withstand hurricane force winds, sand storms, seen cotton developed from a strain that was good only to make toe sacks or potato sacks to a long stemmed cotton, long fiber cotton good for fine clothing. However, the cancer cells, cancer research would interest me more. I hope you find a niche there. As far as the Toastmasters are concerned, when you decide to take them on, you'll be so smart, so sure of yourself, you'll stand before any crowd, with confidence and wow them. And then if I were someday fortunate enough to hear you speak, I could look over to my companion and say, " I knew him when his knees used to shake." You keep writing, I'll keep looking in. G'day.

Haha, thanks Bill. You know, we never use G'day at the end of a paragraph. It has changed from it's original meaning of 'good day' to a pure 'hello' or 'what's up'.

Glad to know that. I've never seen it used at he end, never even thought about it. I'm in touch with a couple of Australians who use it frequently at the beginning of their writings. Thanks for the heads up.

Btw, can you recommend any places in Adelaide to see/eat at? I'm heading over for the first time next week. Got Haighs chocolate factory, and wineries as a definite but not sure what else. $57 roundtrip with Tiger airway!!

Glenelg beach is good for a visit. Melbourne street, The Parade and Rundle street have some decent food. My two favourite restaurants are Captain Jolly's on the Torrens and another one called Citrus. But they're a little expensive. I like the Botanic Gardens a lot. And there's the Mt Lofty botanic gardens too. And take a trip on the O-bahn, Adelaide's city express bus. There's only one other system like it in the world - in Germany. It goes along the world's longest park in any city in the world at speeds of 100km/hr plus.

I just had a look at the O-bahn on Wikipedia and it looks amazing. What an interesting concept. I want to try a nice restaurant there but it'll take some convincing for my two cash strapped friends. Do you know of any cheap eats?

Around the Chinatown area is fairly good, but nothing different from the usual. Or Rundle street is good for outdoor dining.