Not more than a few moons ago, I said that I regarded myself as 'a tolerator of art'. That status has since been modified and my new position has been reclassified to 'an unwillingly frequent observer of art'. The two are not far removed, but my new status more accurately reflects the current weekend climate. 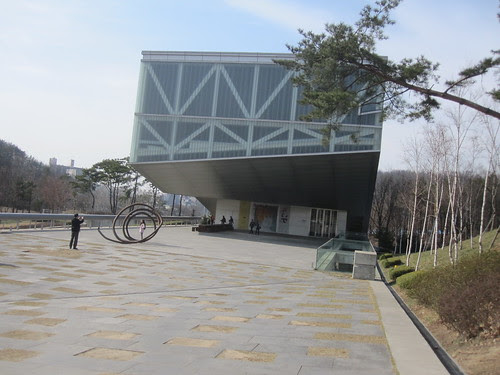 This is the Ministry of Art building at our university, which to me appears somewhat unfinished. Nevertheless, it has been open and operating without structural failures for the past few years. 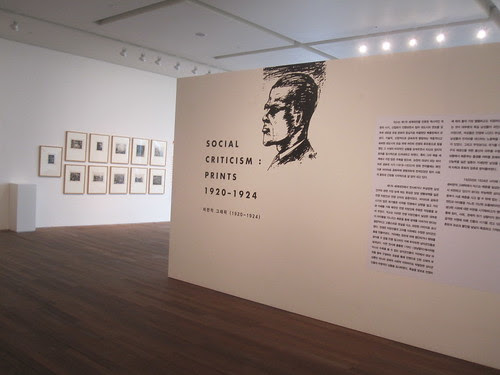 We went along to see the work of Otto Dix, a German war cartoonist of the past century. I wasn't allowed to take photos of the prints, but they mainly consisted of unshaved weary soldiers, either walking across a barren wasteland or strewn across it. 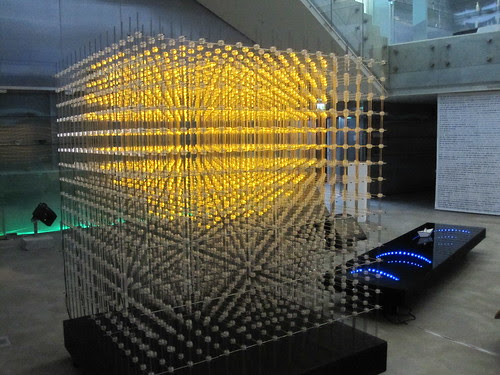 This display is on the basement floor of the gallery and was arguably the most interesting. The lights are animated to form moving spheres in 3D space. It reminded me of the 3D chess games they play in Star Trek, which permits attacking moves along the Z-axis.
We left the gallery soon after I began to discuss the strategic intricacies of 3D chess. 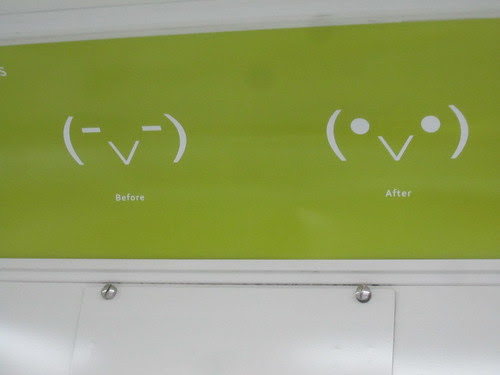 This is an advertisement on the subway for plastic surgery, which is still a popular pastime here in Korea. Like copyright, I'm not sure where I stand on this issue. Some people spend thousands on golf equipment, while others splurge on expensive art or dog grooming. Live and let live, I say, but there's no need to take yourself too seriously. I get the feeling that the current demand for cosmetic surgery is probably driven by some of the more sinister elements of the market economy. The picture above underlines the desire for many women in Korea to have larger eyes.
All the better to see you with, my dear. 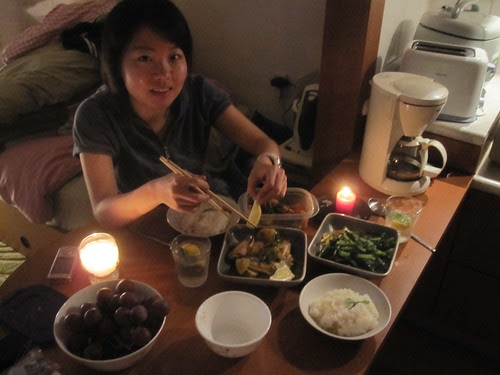 And here's Heather, who requested this week that I call her by her Korean name, which is Ka-Hee. I prefer the English name myself, but being married is all about giving in to the other side at the appropriate times.
Anyway, in this photo is Ka-Hee, enjoying my green chicken curry, the coriander powder for which I bought for $1 from a Thai student at a garage sale. 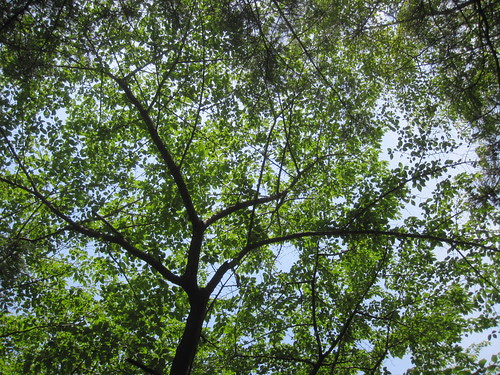 Although my days as a plant pathologist are over, I still have warm feelings for foliage. Our ancient ancestors used it to hide from the eagles above and tigers below. These days we chop it down and occasionally put it in salads. 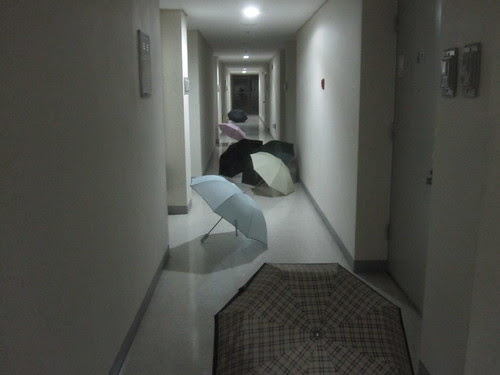 In Korea I've observed a social phenomena that I call 'The Korean Umbrella Non-Aggression Treaty'. Because the apartments here are relatively small, many people will leave their umbrellas in the hallway to dry overnight. The phenomena manifests itself as the idea that everyone can reasonably expect their umbrella to be there in the morning, both in an unstolen and unharassed state. However, once in the apartments of Busan I did find my umbrella missing in the morning, only to be returned that afternoon on my doorstep with tell-tale raindrops dispersed liberally upon it.
The phantom borrower was never identified. 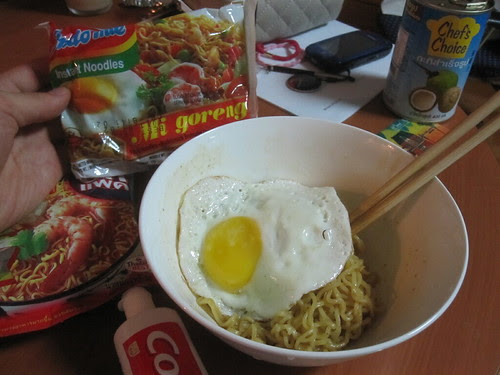 And here's a bunch of things that keep me happy. In the bowl is a packet of Mi-Goreng instant noodles, my comfort food of choice. As an undergrad student in Australia I once lived on a carton of them for a week. It wasn't good for digestion, but fulfilled all of the requirements for deliciousness. Obscured by my hand is a packet of Thai Mami shrimp noodles, which are spicy and come with citric acid in the flavour to simulate lemongrass. On the bottom left is a tube of Colgate toothpaste, which is harder to find than mountain ginseng here. And on the top right is a can of Chef's Choice coconut milk, the best brand in the world. It will be used to make Malaysian laksa, when laziness subsides. Back at Casuarina, we used to make about 60 litres of laksa soup at once, and we'd empty 16 of those cans into it.
Now that's a useful trade secret if you aspire to open your own laksa restaurant. Like me, someday, perhaps.
Posted by Lee Farrand at 7:54 am

Interesting observations and photos you have shown us here. All quite interesting. What strikes me though is that you always seem to eat well. When I read your blogs as I usually periodically, I almost always come a way hungry. Sometimes I can almost smell the aroma rising from a plate.

Also, I was taken with one of the photos. Reflections of light from the candles, not in Ka-Hee's eyes, where I would have expected a reflection, but in her cheeks. Nice shot, great subject. Good blog.

Interesting observation with the reflections, Bill. I like food a lot because it's an enjoyable science. That's gin and tonic we're drinking too...

Mi Goreng! Too bad it's not the Maggi brand (which is my personal preference). Since Chef's Choice coconut milk is your recommendation, I will keep an eye out for it. I usually buy the cheapest brand out there.

Will you invite me over when you make laksa?

And oh I miss laksa so much~~~

And the original Casuarina Malaysia is from my hometown -- Ipoh!!~

Thanks for dropping by my blog, I and my Malaysian labmate had read all about your hard time with your previous labmate in your former lab. It was a very inspiring story for us, as we were going thru something similar at that time.

Fighting!!~ And keep up the great blogging~

Thanks Xiao Wei, I will. I can make a lot of Malaysian food too ^^

Joseph, sure, if you're around. But I still haven't found satisfactory noodles here yet.

lol..
Korea is such an interesting place. I wish to go there one day.