Our New Professor and the World Cup

Professors are a fascinating breed of human. While resembling normal people in many important aspects, they do, however, have uniquely identifiable features. My observations of the subject have determined these features to include a lofty irreverence for adolescent vocabulary, an unwavering ability to remain unfazed by perplexity and a general benign indifference to popular norms.
They also have the remarkable ability to make you feel that you know a decreasingly small amount about a subject that you previously thought you knew a lot about. That amount directly decreases in proportion to the amount of time a professor spends giving you feedback on a research proposal. 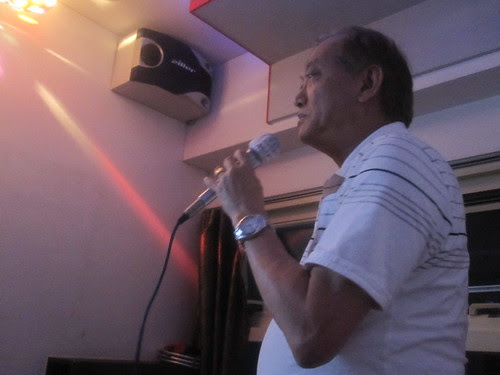 My new professor is pretty cool though. He drinks beer and likes fried chicken from a place called 'Chicken Mania'. His wife once gave me a piece of cake, as a consolation prize for not being able to fix their printer.

He also likes to sing in noraebangs and knows a lot about ovarian cancer. 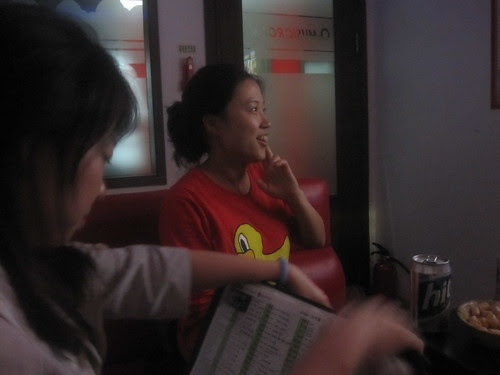 Smiling in this photo is Seo-Jin, who is a Biomodulation student in Professor Lim's lab over at Building 200. She's very helpful and translates class assignment questions for me, which are often written in Korean. 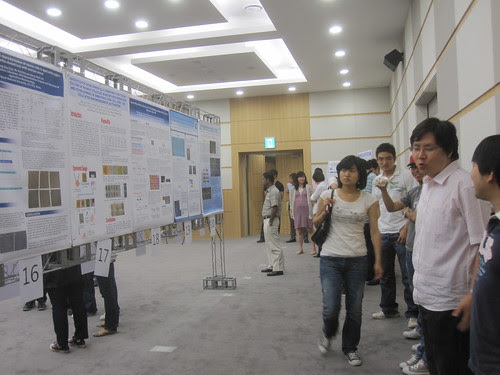 Before our professor took off for Canada, he organised a poster competition, which went well. He likes to organise things in general, and doesn't sleep much. Sometimes I get replies to my emails timestamped at 4am. In Canada he organizes charity fundraisers that auction things like 'lunch hosted by an ambassador'.
He told me that businessmen go nuts for those kinds of things. 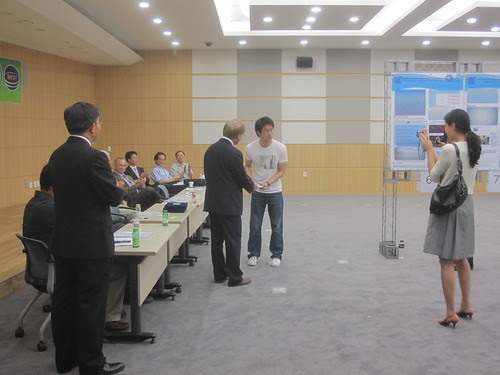 Here he is, giving the first prize to Sam, who won the poster competition. Sam's poster was about functional food and tumors in mice. You'll hear about it in the newspaper one day. 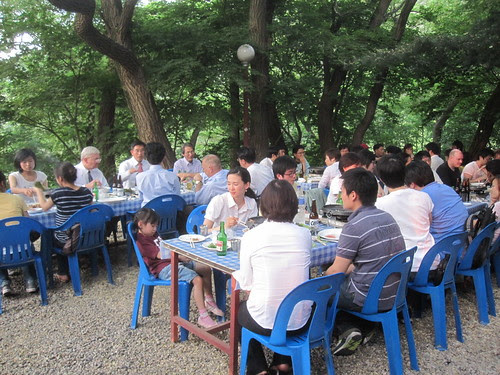 The foreign faculty in Biomodulation only stay here for four months of the year, and spend the rest of the time back in their home countries. The program was designed to bring international influences here to our university and boost the quality of research that we do. Has it worked?
Ask me again in a couple of years. 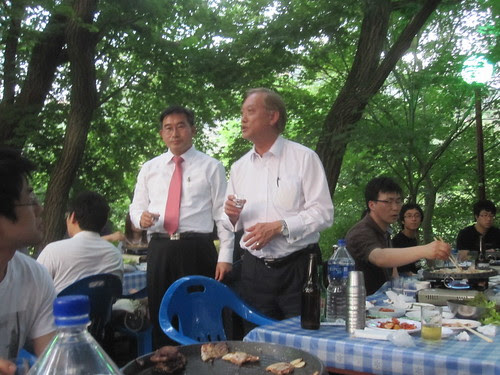 That particular day we had a farewell dinner, and our professor gave a short toast. To his left is Professor Han, who is the Main Man when it comes to Biomodulation. He's got a lot of responsibilities resting on his shoulders, but is doing a remarkable job of getting things going.
One thing he can do is go around the table and have an individual soju shot with every professor in the department (13), as well as a good chunk of the students. And then he can recite the Periodic Table of the Elements. 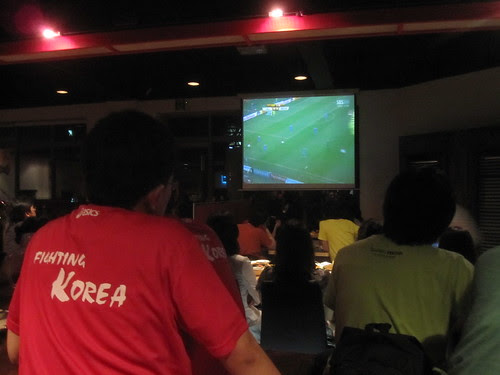 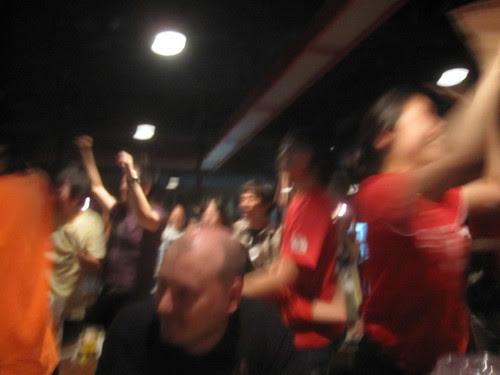 The World Cup came and went. I like soccer a lot, but in Korea they go kinda nuts whenever anyone Korean accomplishes any kind of sporting achievement. If a Korean were to become a croquet champion, the Croquet World Cup would be instantly catapulted into the number one most popularly watched event. And demand for croquet instructors would go through the roof. 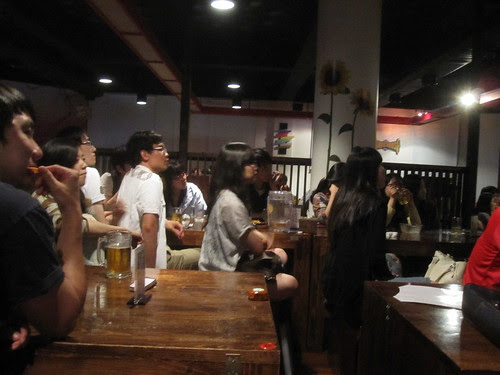 Which is fine, I guess. But as Carlos Pavao at SRTM says, it's important to be able to laugh at yourself every once in a while too. 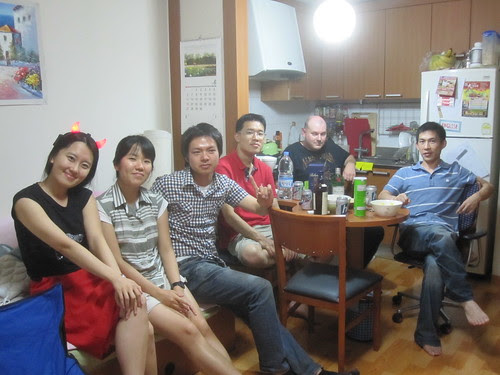 For the Korea vs Uruguay game, we had some people over at our place. I like hosting people in general, but our place is pretty small. We hope to move into a bigger place next year and then we can do all sorts of interesting things, like Vietnamese Cold Roll Parties.
In the end, Spain ended up winning the World Cup as predicted by Paul the Octopus. Which, as a mathematics professor pointed out, is not that remarkable because we never heard about all of the psychic animals that made the wrong predictions. The media only made Paul famous after he had already selected quite a few winning teams.
According to the Wikipedia article: The animals at the Chemnitz Zoo in Germany were wrong on all of Germany's group-stage games, with Leon the porcupine picking Australia, Petty the pygmy hippopotamus spurning Serbia's apple-topped pile of hay, Jimmy the peruvian guinea-pig and Anton the tamarin eating a raisin representing Ghana. Mani the Parakeet of Singapore, Octopus Pauline of Holland, Octopus Xiaoge of Qingdao China, Chimpanzee Pino and African Red River Hog Apfelsin in Estonia's Tallinn Zoo all picked the Netherlands to win the final.

Sorry to burst any psychic animal fantasies you may have had...
Posted by Lee Farrand at 3:01 pm

I couldn't agree more that professors have this magical ability to make you feel like you know next to nothing about a given subject.

I hope I can develop that skill one day.