These Days, at SNU

Life at SNU continues in a moderately good to remarkably good fashion. Since transferring my program in May this year, I've been overall quite satisfied with the work environment.
Recently we passed the dreaded Annual Review (of Doom), handed out each year by our lovely friends at MEST. An entourage of suited males came to inspect our documents, records, and underpant hygiene last month. We passed with flying colours.
And embroidered nylon images of Superman. 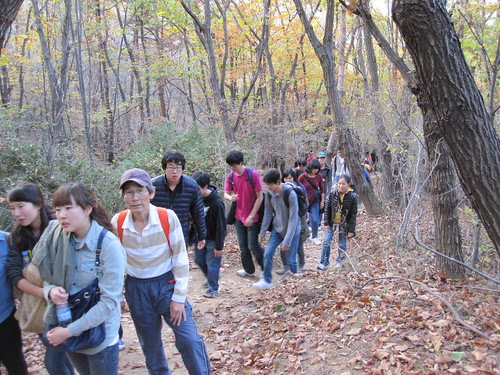 As a reward for doing so well, Professor Han chose to take us out hiking. Many students wondered "Is hiking a reward or a punishment?", though none out loud.
The man wearing the cap with the thousand-yard-stare is Professor Shimada, a member of the international faculty in our department. He's a Japanese expert on birds. 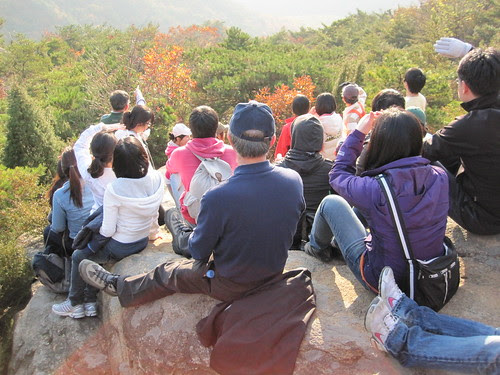 Here we are, collectively perched on a rock, like migratory monkeys on a transcontinental flight. 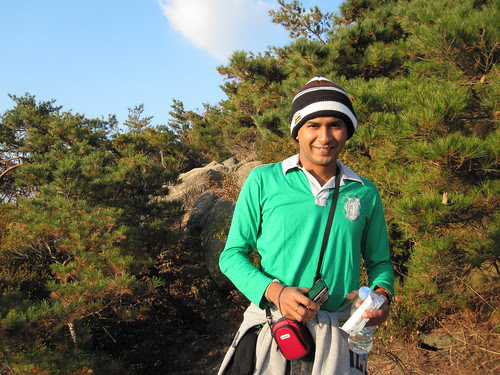 Meet Sandun Abeyrathne. He's a recent Sri Lankan addition to our Biomodulation international student body, currently consisting of only Sandun and me. The statistics now show that an astounding 50% of our international PhD students are from Colombo.
The other 50% are from Adelaide. 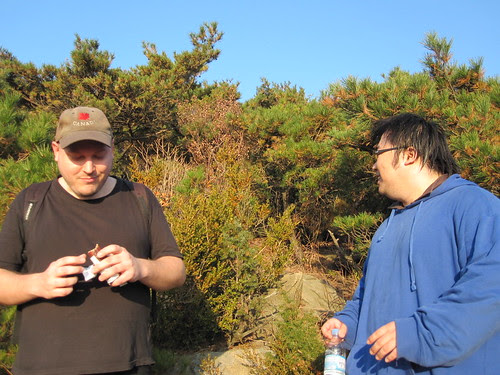 On the left is Dr Vahlberg and on the right is Ahn Jong il. They're the big boys of our department and provide the necessary heavy handedness when dealing with pesky PCR tube salesmen. After a quick hike around the perimeter of our university, we went out for dinner. Staring into the lens of this photo are two members of Professor Suh's lab, evidently seeing a camera for the first time. Cutting up the meat is Tae-Kyung, a smokey molecular biologist and fellow drinking enthusiast. 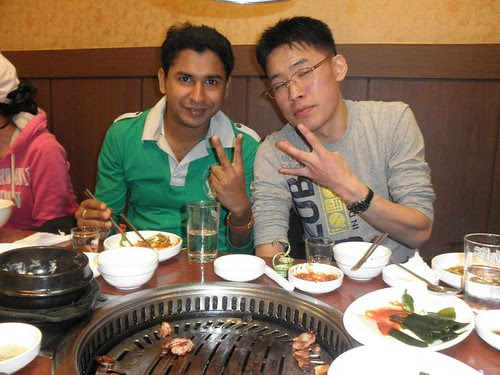 Sandun helpfully tagged me in this post-soju photo on Facebook. I guess that's what friends are for. Under the photo began a vibrant conversation involving Sri Lankan nationals. Upon reading Sandun's description of Korean food, I couldn't help but chime in. 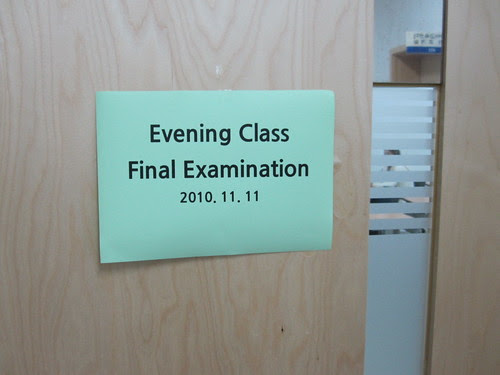 I signed up for Korean classes at SNU this semester in the Language Education Institute. In general, the quality of a language class depends almost entirely on the skill of whoever your teacher is. And our two teachers were very good.
Two essential pieces of advice when teaching language to older students: Stay animated and give many examples. 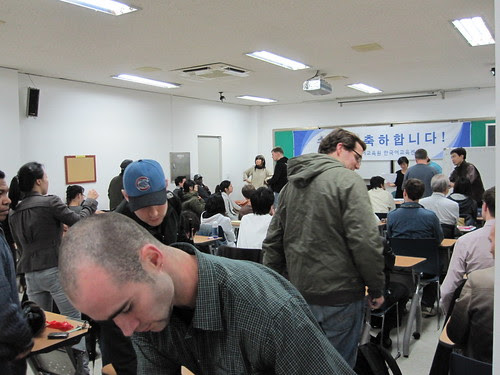 These photos are from our end of term exam. We had ten weeks of classes on Monday and Thursday evenings for three hours each. Fitting it into my schedule was a pain, but I felt obliged to give the great Han tongue another try. The price was around 500,000 won. 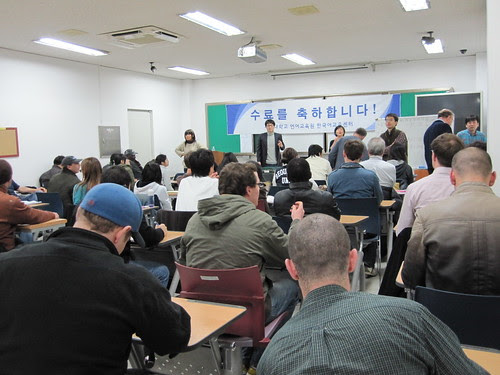 One thing I'm good at consistently failing at, in general, is learning Korean. I've tried on and off for the past 4 years, admittedly without a huge amount of zest. But it just doesn't really sink in for me. I can order pizza and have a conversation with a hairdresser, but despite all the Korean I've been exposed to, I still sound like a toddler with a stammering problem.
We graduated the level 5 evening class, as a group of ten students. I learned a fair bit, I think. But I'm sure it'll all leak out while I'm asleep. 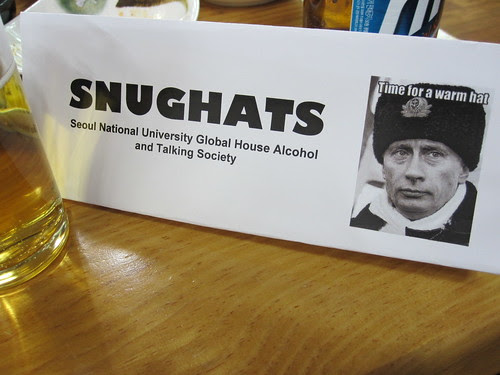 I recently had a campus chat with Ga-Young Choi, a fellow Toastmaster, about the lack of social networking here at SNU. Many students here study endlessly, sleep little and answer friendly conversational questions in a robotic tone while staring off into the distance.
As a proposed remedy, we thought up an idea to start a social club called the Seoul National University Global House Alcohol and Talking Society - SNUGHATS. The idea was to bring students together on Friday evenings and enjoy a good brew and a chat. Global House is a bar near our dormitories.
We started a Facebook page to promote our first event, an 'inaugural symposium' at the bar. But all 8 potential attendees cancelled due to scheduling conflicts. Ga-Young herself was bombed at the last minute with stacks of work by an unscrupulous lab senior and couldn't make it out. Our inaugural meeting was a miserable failure. 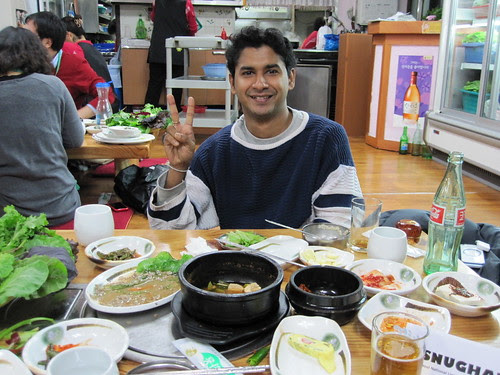 Well, I should say, it was nearly a miserable failure. Keeping me company while waiting in the freezing foyer of Global House was the only other attendee, Sandun. After thirty minutes of shivering, we decided that it was unlikely that anyone had seen our single advertisement posted in our building's elevator. So we decided to head out and hold the inaugural meeting with just the two of us. Sandun doesn't drink, but I had a beer. It was a humble beginning for a social club.
We ended up having a pleasant dinner and chat. Without Sandun's company, I guess I would have been eating by myself. Which, despite my enthusiasm for all things strange and fun, would probably not have been very enjoyable. We're planning to have another try at a club meeting when the weather gets warmer. And perhaps we shouldn't have planned the first meeting during the final exam period.
Anyway, thanks Sandun. Your company was appreciated!
Posted by Lee Farrand at 1:24 am

Congrats! It's interesting that you claim to fail Korean but still emerge unscratched from level 5 class! I was level 3 when I learned and almost went crazy xD

You're so verbal & funny!!! And I so enjoy reading your blog even though we've never met. Keep up the good work and Have Fun!!!

My humble contribution... You may find it funny that MEST means dung in Dutch... :)