After a good month of planning, and due to the excellent aforementioned research, the SRTM summer wine party came off as a roaring success. We attracted exactly 99 guests, from various clubs around Seoul and consumed enough wine to keep the importers in business. 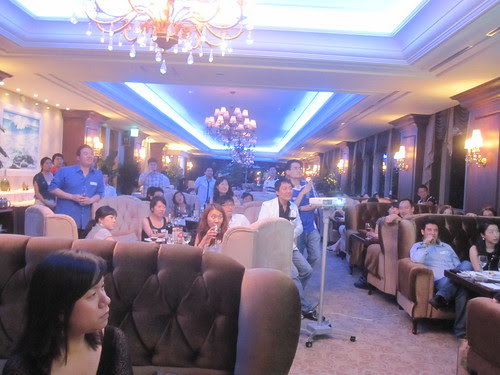 We started with a few announcements from club presidents, including the elusive Joseph Jeong, who is back from Chicago for the summer. Joseph is a Malaysian food enthusiast, and I've been meaning to cook for him for so long that anything I come up with will probably fall short of inflated expectations.
And Korea appears to be one of the rare countries without a single microgram of belachan. 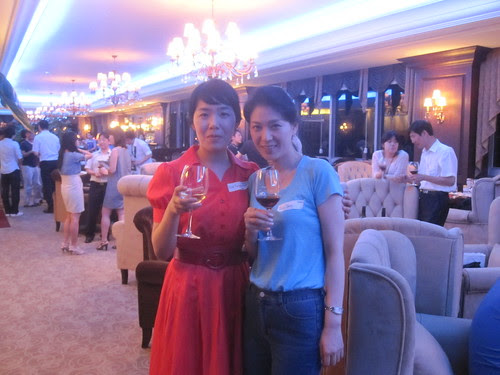 Here are my two favourite nunas, Alice and Judy. Even though they're Korean native speakers, when they're talking to each other at Toastmasters events, they usually stick to English. I often wonder if it's because they're being polite to eavesdroppers like myself, or just because it's confusing to switch between languages too much.

Only the nunas themselves would know... 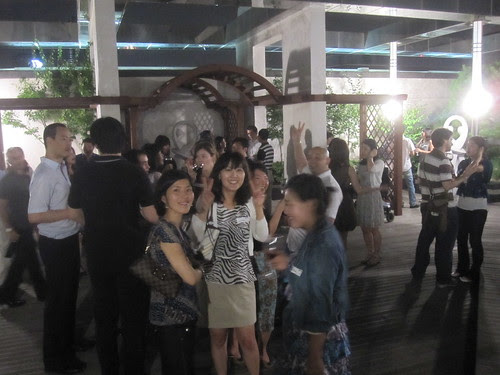 Later in the evening, we all went up to the rooftop garden for some lively mingling. Wine parties are interesting creatures because at the peak of the night, nearly everyone is at the same level of tipsiness. If you charge $30 per person, only those who drink will attend. But because they're more civilised than a beer or a vodka party, very rarely will anyone go overboard too early.
Getting drunk and causing a scene at a wine party is technically referred to as a party foul, I believe. Such rules are more relaxed at parties featuring other drinks, say for example, Tequila. 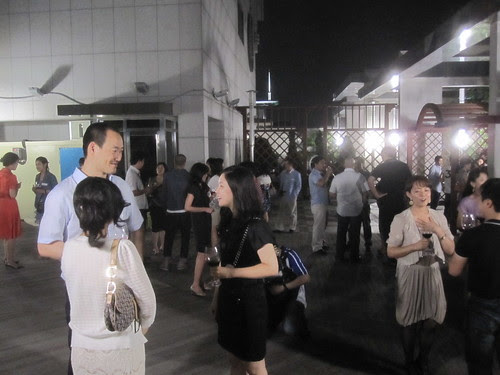 Look, it's Chris Lee. Chris is quite popular with the ladies, and not only because he's tall. It's also because he knows how to listen well, and that's exactly what ladies look for in a man.
One day I need to confirm with Chris whether the secret is actually listening to people, or pretending to listen. My mind tends to wander after a while. 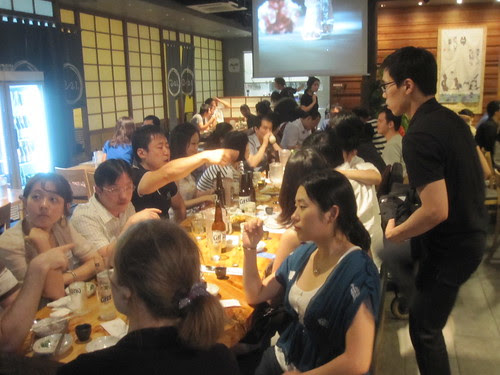 Before long it was time for the second round at the nearby Izakaya. You can tell how successful a night is by the percentage of people in attendance at Round 2. By this time we were all in pretty good spirits and having trouble coordinating a group menu together.
Tipsiness is fun, but it also distracts you from questioning the wisdom of dropping a shot of soju into a glass of beer and drinking it all at once. 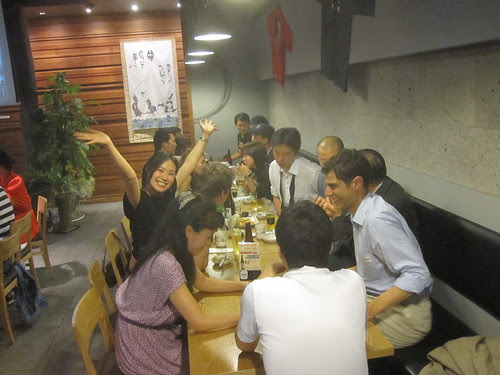 And there's Yulim Sung, evidently delighted at such an enjoyable night. Yulim is one of our favourite drinking friends, but we only started hanging out with her relatively recently, and we drink less these days. If she had met us back when we were young whipper-snappers, oho... there would have been a lot of pavement collisions. 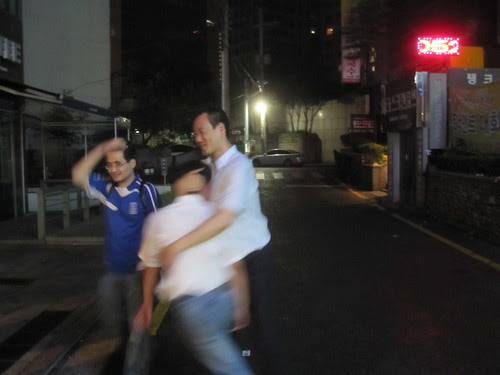 Here's a mystery man being saved from an impending pavement collision by Chris Lee. Chris's long arms allow him to handle such situations with relative ease. 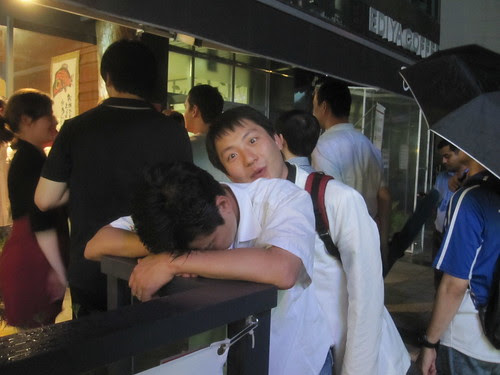 And here's our very own Robert Cha, taking care of a prominent member of SRTM. On American Forces Network (a TV channel here), they call friends like Robert a 'Battle Buddy'. You need one when you go out drinking, to make sure you don't get into more mischief than you can handle.
In Australia, when we drink too much and can't remember how we magically got home the next day, we attribute it to the mythological Beer Scooter.
When was the last time you rode one?

No worries, it's been a such a long time since I had good authentic Malaysian food, that anything remotely close will go over very well!

If you ever find belachan in Korea, please do share the info.