The only thing better than a potluck party, in married life, is a wine party. Although both can feature wine, a potluck requires the preparation of food, something that invariably requires the input of effort. And every closet alcoholic knows that food is just an awkward icebreaker for suggesting wine consumption, something that a wine party circumvents with a conveniently thoughtful title.
You know, I never used the term 'potluck' before I came to Korea. It probably snuck into my vocabulary via frequent interaction with North Americans. What did we call it in Australia?
Probably something like a 'bring-your-own-food party'? 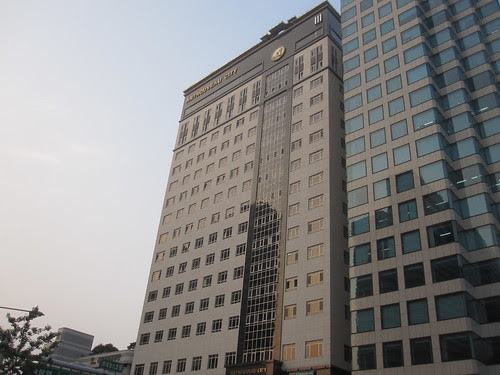 Every year SRTM holds a summer wine party to facilitate comical interaction between members and guests. This year, Robert, Hyun-Gee, Johnny, Annette and I were on the organizing committee. And any wine party committee with a proper sense of responsibility will sample the wines on offer before summoning the tribe. 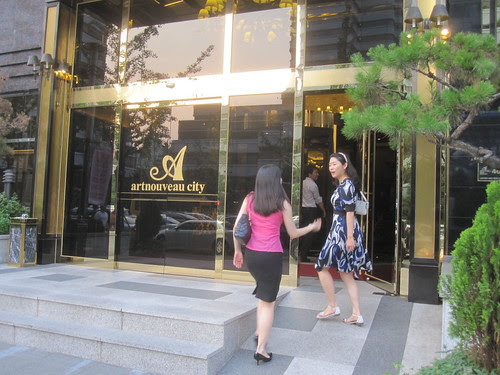 We chose the Yeoksam Art Nouveau City Sky Lounge as the venue. It's between Yeoksam and Seolleung subway stations, directly opposite the Renaissance Hotel. 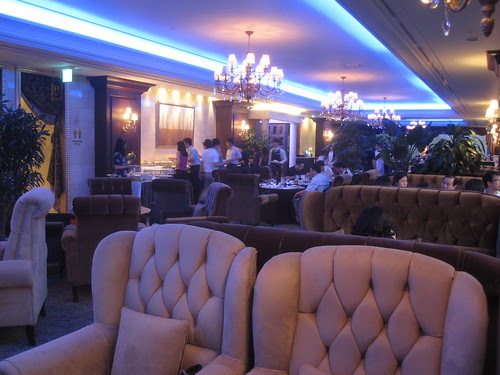 This place is good. They have a nice cold food buffet and unlimited wine for 3 hours from 7:00 until 10:00pm every weeknight. The interior design is 20th century Victorian, I believe, apart from the blue neon lighting, which is classic Korean Star Trek decor.
Uncultured are those not of the opinion that everything goes well with neon. 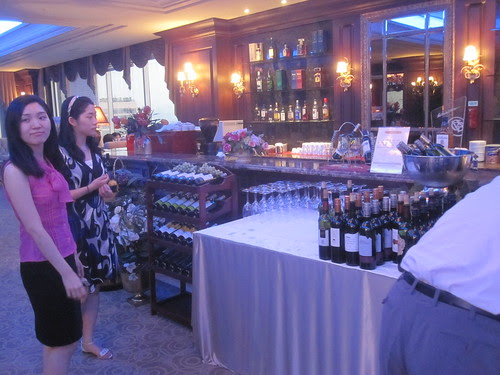 My liver and I have experienced a few unlimited wine buffets in our time. If you pay less than an unreasonable amount of money, you'll often be confronted with the finest selection of $10 wines that cannot otherwise be sold. But at Art Nouveau, the wines were surprisingly good. There were Spanish, Australian, Chilean and South African wines to choose from, and all of them were enjoyably imbibable. 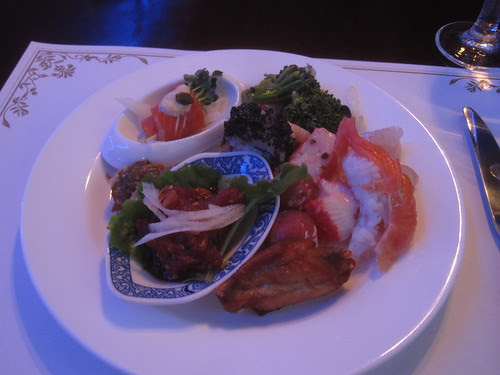 The food on offer was well balanced and without shortcuts. Despite being pretty far from my place, I'm planning to come back here sometime soon.

The wine and food buffet at the City Sky Lounge is only available on weeknights and is W27,000. 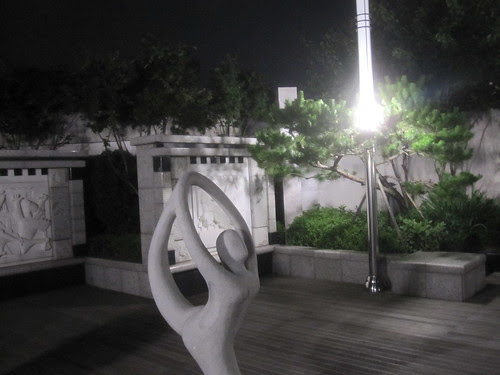 We discovered through our post-wine adventurousness, that they also have a rooftop garden. 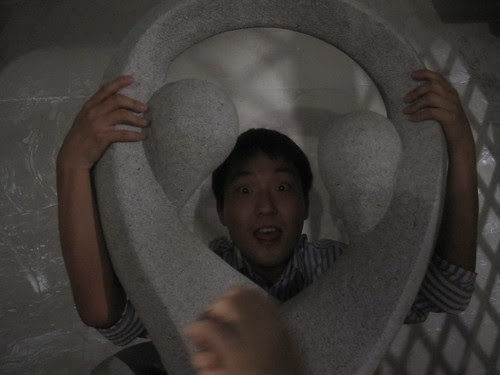 Robert was particularly taken by the various anthropomorphic statues on display. 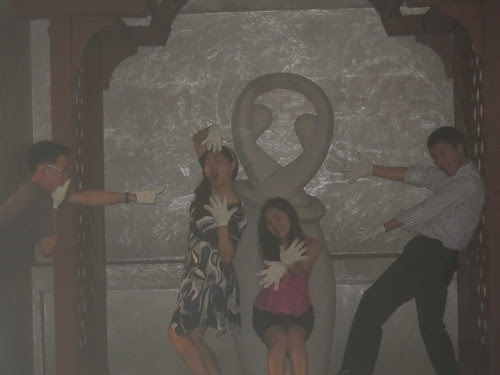 Inspired by Robert, and also due to the inifinite possibilities arising from unlimited wine, we transformed ourselves into talented mimes. Someone had hung some white ajossi gloves out to dry, and we made good use of them for our show.

Our research having been done for the night, we went home after the second round. 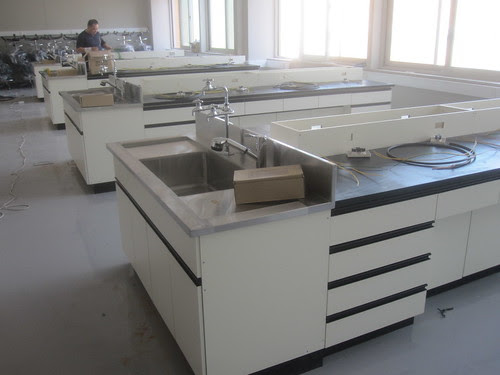 This is what our new lab looked like a couple of months ago. 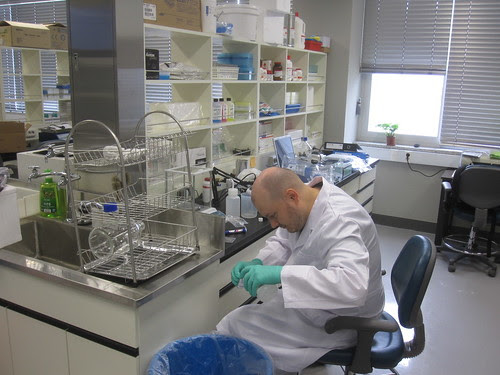 And here's Dr Vahlberg in the lab more recently. We're still waiting on various equipment to arrive, but have been able to set up some simple experiments to confirm that our cells survived the trip from Ottawa. My guess is that we'll be in full swing towards the end of September. 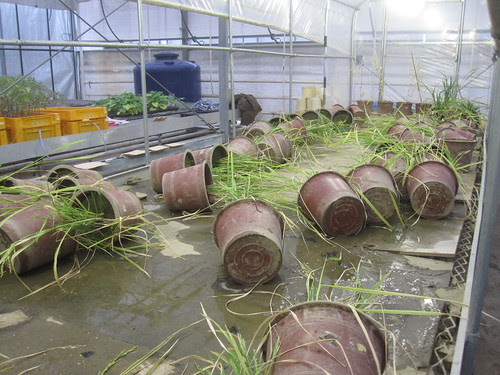 This is a photo I found from my old work in the Plant Bacteriology lab. These were my rice plants in the Suwon greenhouse, on the final day that I worked there. I tipped them over to drain the water from them. Plant biology is interesting, but it's not as exciting as cancer research.
I'll tell you all about it once we get our biohazard hood, CO2 incubators and fluorescence microscope up and running. 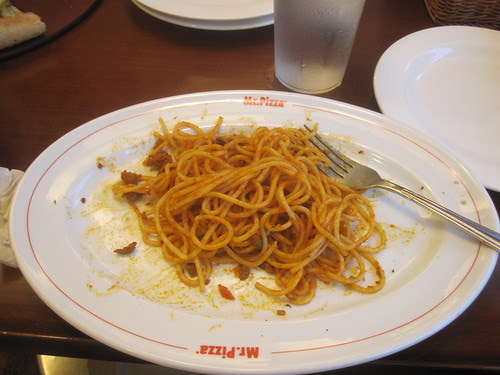 Mr Pizza is a franchise restaurant chain in Korea. The pizzas are edible, but they get my vote for the worst spaghetti in Korea. If I were a ranting blogger, I'd go on about it.
But we'll just leave it at the popular Konglish description of not-delicious. 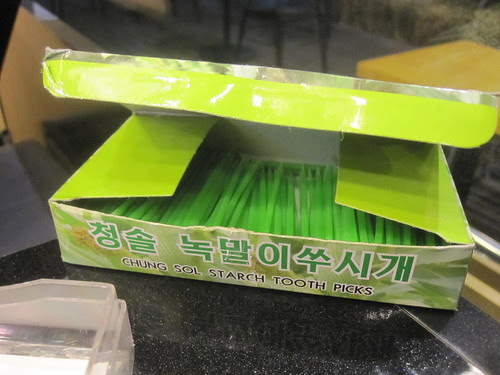 In Korea they make starch toothpicks from potatoes. They're strong, but dissolve slowly in your mouth. Good for biodegradability and forest conservation. I'm surprised they haven't been successful outside of Korea.
Any readers out there who are in the import/export business? There's a starchy goldmine of an idea right here. 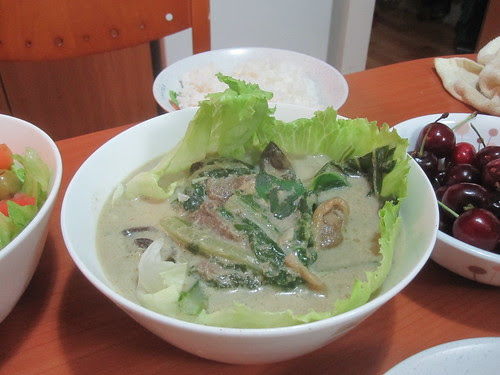 Every once in a while, students in the BK International House have a sort of garage-less garage sale. It's often a good way to pick up exotic ingredients from the SE Asian students. A while ago, I picked up some green curry paste from a Thai student and made it into this curry. I'm more of a red-curry kinda guy, but this one wasn't too bad. 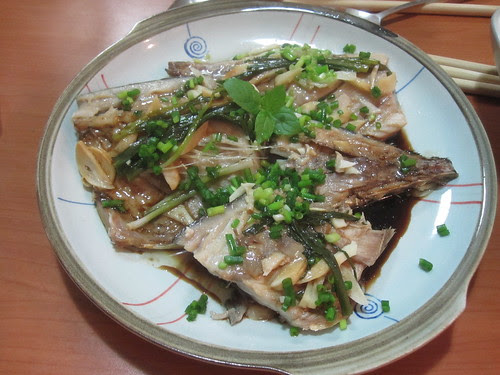 And here's a steamed mackerel that I hammered out of an old coral trout recipe. It's Hong's dad's old trick. You steam the fish, then add ginger, soy and spring onion. Then you get some oil in a pan on high heat and drizzle it over the toppings to fry it lightly. Fairly simple, but works wonders.
Mmm, now I'm hungry again.
Posted by Lee Farrand at 5:40 pm

2) those green toothpicks I see everywhere are biodegradable?? I had no idea! I thought our landfills were being filled with little plastic sticks since they are everywhere!

btw, I guess you suggested my name to someone looking for science teachers in the winter.... looked like a pretty sweet gig, but I'll still be working at my hagwon then -_-... tried to get some friends from home to apply, but no one seems interested in coming to asia for some strange reason...

Yes, it's a bargain. Directly opposite the Renaissance Hotel. I gave your name to Arthur, he's keen on getting a teacher.
If there are any readers out there with a science degree that are interested in 3.8 million for a four week winter camp in December, let me know.

Will an engineering degree be acceptable? Heh.

Your last photo reminds me that I really should try to sample some of your cooking (and maybe pick up a tip or two) before I leave this time around.

My cooking skills have faded a bit, after four years here. But I still have a trick or two. James and I wanted to have a shisha session too...