Wikipedia's biggest pull factor for me is that the large majority of articles are presented in a succinct and relevant way. Complex topics are often simplified for the layperson, but simple topics usually contain comprehensive information that your average joe wouldn't know. A good example of these kinds of articles are the ones on ants, chickens and today's article, on the humble octopus. 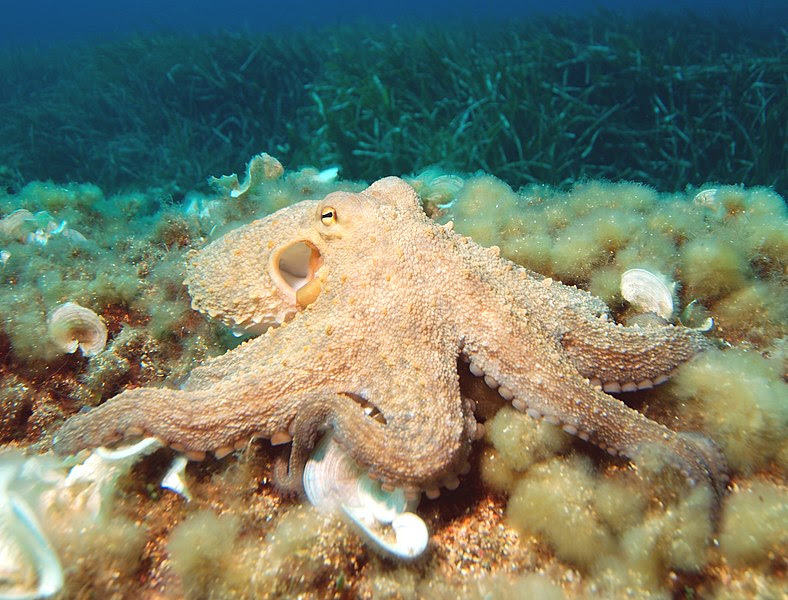 Octo means eight, and -pus comes from the word pous, meaning foot. This gives a whole new dimension to the expression 'pussy footing', which actually, now that I think about it, is probably a feline reference. The Oxford English Dictionary lists the plural form as octopuses, which is the right way to say it. Despite what you may have been led to believe, the word 'octopi' is a hypercorrection, and less accurate. That's because 'octopus' is not a purely Latin word, it's a Latinisation of the Greek third-declension masculine. If the word were truly Latin, it would be octopes, with the plural form of octopedes.
If you want to be cool, you can use the alternative plural which is octopodes. 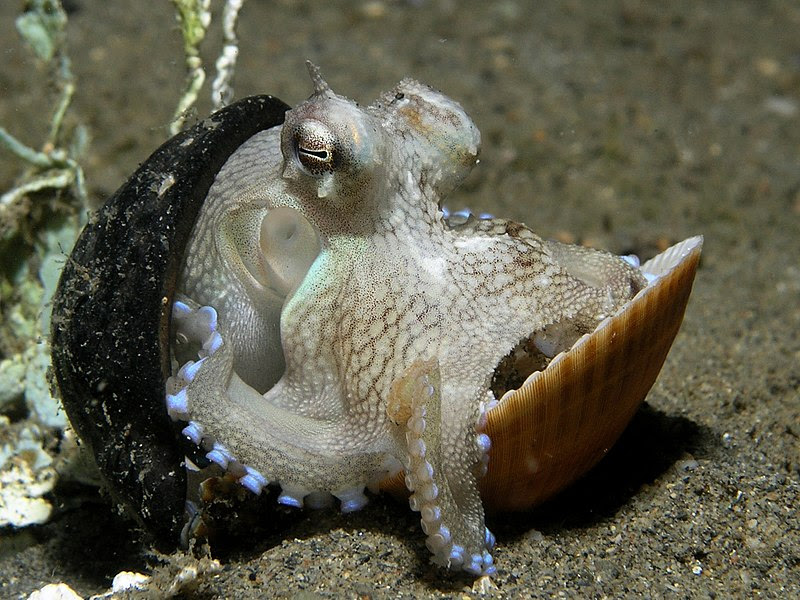 Our octopode friends are cephalopod molluscs, evolutionary descendants of shellfish and cousins of snails. I believe the technical term is 'squishy'.
As masters of disguise, they can mimic highly complex backgrounds with their skin, even forming small knobbly protrusions to get the texture right. They also employ jet propulsion to escape and can expel ink to confuse predators, including hungry Korean hae-nyo. 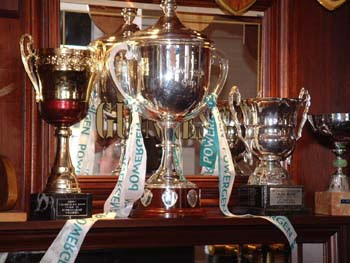 In fact, no organism is more worthy of the non-existent Animal Magician of the Year Award. To compensate for this minor injustice, Lee's Korea Blog has decided to hereby invent and dedicate this inaugural award to octopuses everywhere.
Mental round of applause please.
See, this is what I'm talking about. The video above is showing an octopus disguising itself as a coconut bobbing along the ocean floor. The only tell-tale sign is that you can see two little pedes, which are sneakily providing locomotion.
We will just ignore, for the time being, that an intelligent predator may realise that most coconuts actually float. Full points for creativity. 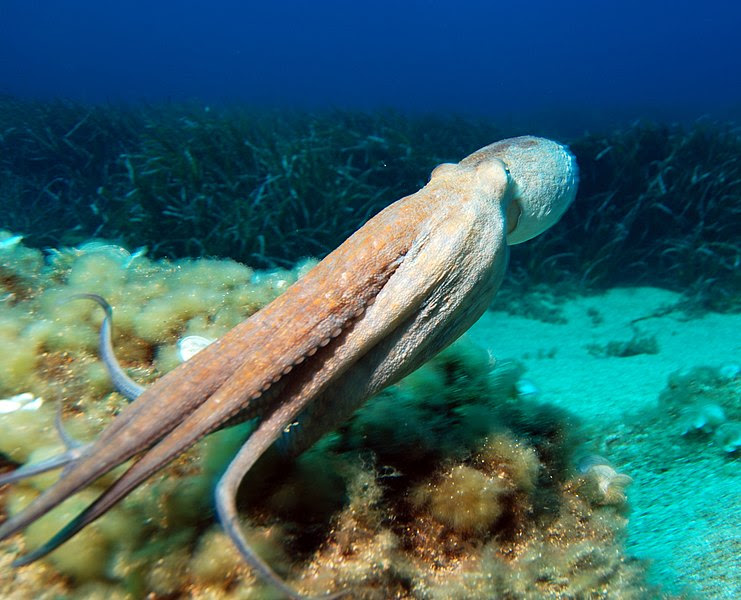 Octopuses are intelligent animals, described by divers as having distinct personalities. Some are aggressive, while others can be timid, curious and even friendly. In the UK they are legally defined as 'honorary vertebrates', subject to animal rights protection. They have three hearts and blue blood, because they use copper-based hemocyanin to carry oxygen rather than the hemoglobin common to mammals. 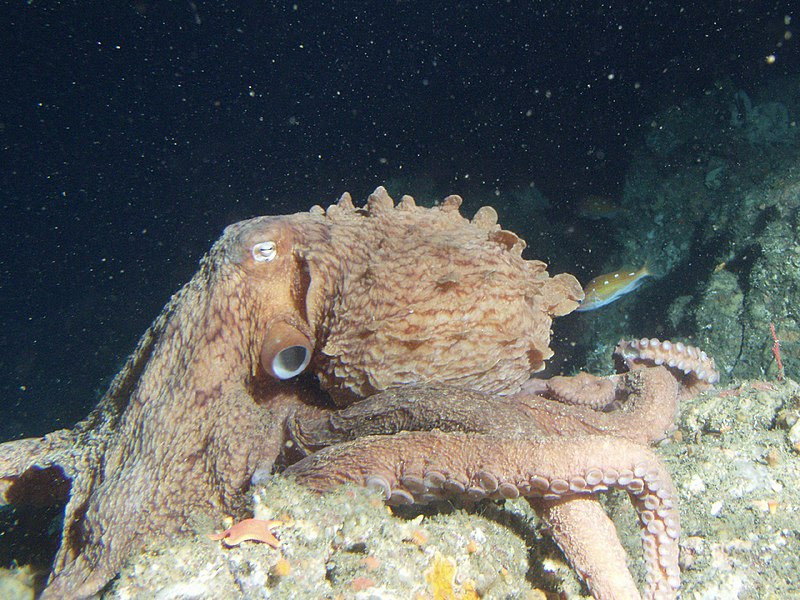 Apart from being munched upon, a major cause of death for octopuses is reproduction. Males will die within a few months of mating and females commit programmed suicide if they are not predated upon. After taking care of their eggs, girl octopuses can secrete endocrines from their dual optic glands which knocks them out like cyanide. 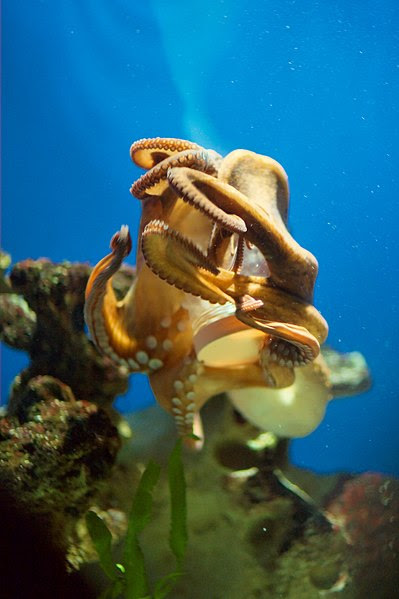 Because octopus arms are highly complex, their brains do not have the processing capacity to form a mental picture of what their arms are doing overall. Instead their brains just issue basic commands, and the nerve cords in the arms figure out what to do. There are no feedback systems in place to let the brain know what an arm just did, so the octopus learns what happened by watching the outcome.
Octopuses have also been seen playing with bottles in captivity and have a reputation for escaping from aquariums without a fixed lid. A story I heard when I was young was that an elementary school classroom once had a tank with live crabs in it. Across the room was a separate tank with a pet octopus. After a while, the crabs started disappearing and so eventually the teachers installed a CCTV camera to figure out who was taking them. Lo and behold, the tape revealed that the crafty octopus was escaping its tank at night, walking across the classroom, feasting on the crabs and then walking back to its own tank. They have even been known to board fishing boats and open holds containing a fisherman's catch.
Which is technically not piracy, but maritime theft, I believe. 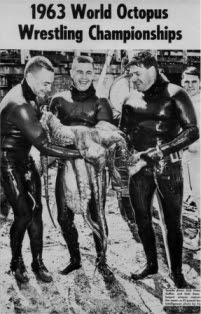 And finally, octopus wrestling involves a diver, preferably without breathing apparata, wrestling with an octopus and bringing it to the surface. It was pretty popular in the 1960s.
Here's a quote from the article:
"All this while O'Rourke was becoming perhaps the world's greatest authority on the thought processes and the personality of the octopus. He knew how to outmaneuver them, to outflank them, and to outthink them. He knew full well, many years ago, what today's octopus wrestlers are just beginning to learn--that it is impossible for a man with two arms to apply a Full Nelson on an octopus; he knew full well the futility of trying for a crotch hold on an opponent with eight crotches." 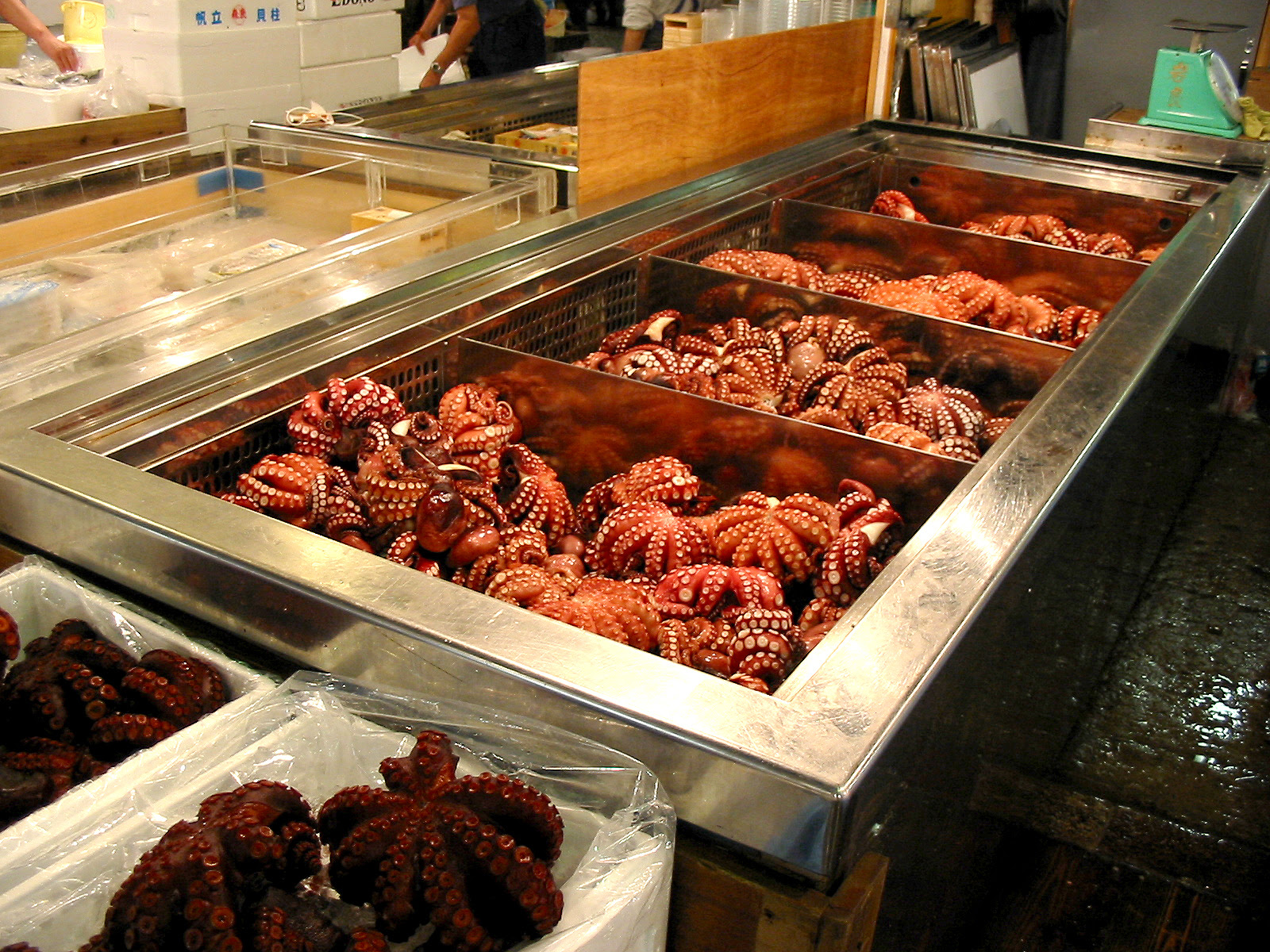 Man and octopus are probably destined to misunderstand each other for an eternity, due to their alien-like appearance and competing culinary interests. We also tend to limit their romanticism to Cthulu mythology and odd fetishes.
But the next time you dine on a takoyaki or jjukkumi, ponder the revelation that you'd probably not be so handsome either, if your body plan included eight arms and a beak.
Posted by Lee Farrand at 8:28 am

Oh how interesting, about the brain/arm processing. Is it considered conjecture or fact? Forming a mental picture of what their arms are doing overall does indeed seem hard. However, in all the wiggly squish and jiggle, they must have some conception as they can achieve "unnatural" accomplishments such as manipulating Rubik's Cubes and opening jars. Interesting to ponder.