There are a few places to get away from the regular buzz of life in Seoul while remaining within walking distance of a familiar subway station. Yeouinaru is one of them. Within eyesight of the 63 Building and earshot of multiple major highways lies a little oasis of carefully mown lawns where Seoulites come to rest and play. 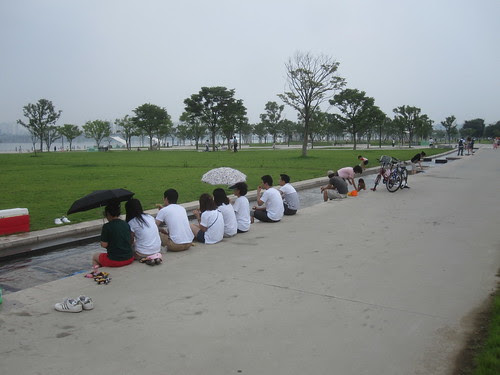 The Seoul City Council (who brought us such amazing feats as Arisu, and bicycle-accommodating carriages on the subway) have added a nice touch to the area, with a little creek built right next to the sidewalk. 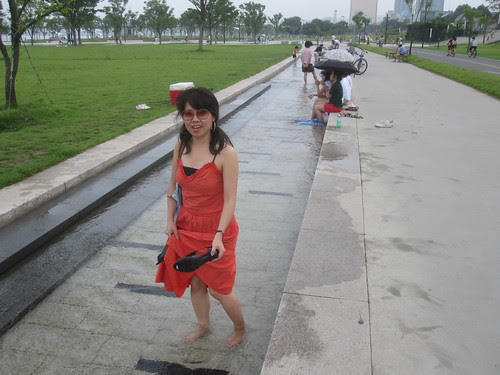 Here's my favourite wife, Heather, who is evidently not afraid to get her feet wet. 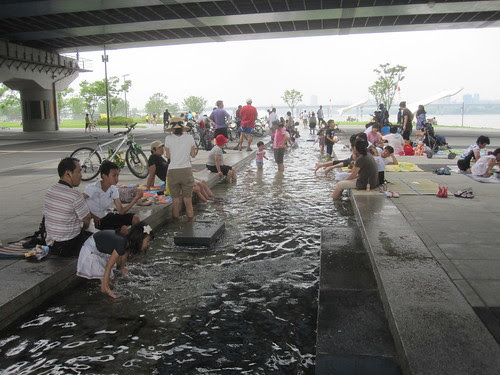 The little creek starts near the subway station, and is born into existence through a series of nozzles that pump chlorinated water into a concrete aqueduct. Along the way it amuses and delights the citizens of Seoul by the simple act of wetting hundreds of pairs of feet with cold water. If you considered a real mountain-coursing stream to be a wolf, then this would be the equivalent of a hairless chihuahua in a petting zoo. 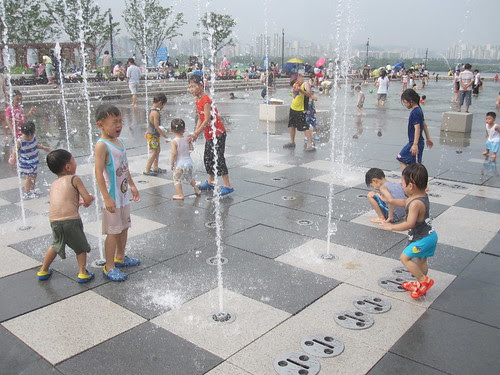 The fascinating thing about both artificial streams and hairless chihuahuas is that both are the result of human intervention in the affairs of nature. Chihuahuas were domestically inbred from wolves, while artificial streams have been around since the Gardens of Babylon. There are many more fine examples of mankind's handiwork in the world around us. 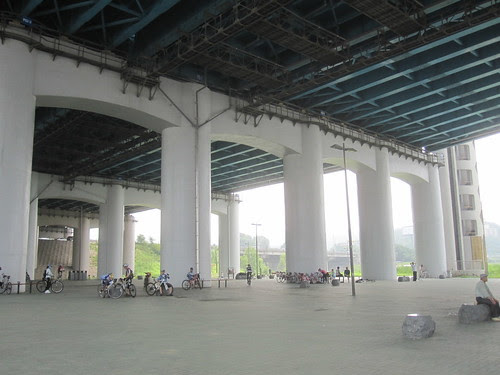 Bridge pylons, for example. These huge cement structures are something that I've come to admire a lot more during my time here in Korea.
Strong, reliable and strangely humble. They allow those in a car to freely pass what would have taken 30 minutes by boat. What's not to admire about that? I'm sure there are plenty of excellent pylons around the world, but in Adelaide, a lower demand for cross-river transit means that most of our bridges are rather cute Victorian-era stone arches. 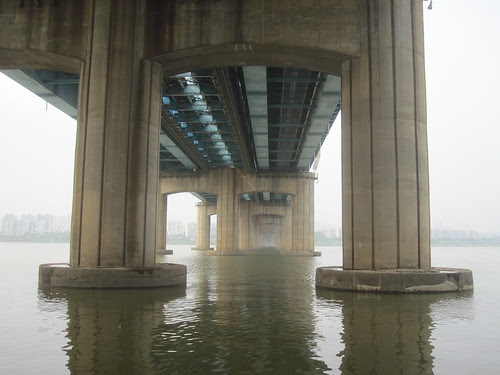 Have a look at these ones. Just standing there like it's another day at the office. You may like to think of them as silent sentinels, endlessly challenging the strength of the Han with an unwavering gravity of reinforced concrete.
I certainly did.
It has just occurred to me that we are probably under-appreciating our gargantuan stone friends. To compensate for this lacklustre acknowledgment, I propose that we have a Bridge Pylon Appreciation Day here in Seoul.
Operator, get me the number for Oh Se-Hoon's office. 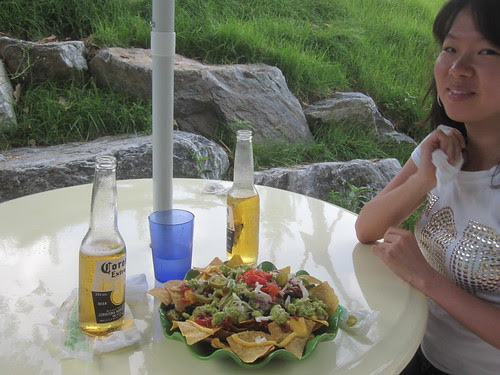 Back at university, we're lucky enough to have a Dos Tacos outlet on campus, right next to a Pho Bay franchise. Now Pho Bay is the same as Pho Bay anywhere, selling Vietnamese noodles more realistically equating to 'noodles' that are supposedly 'Vietnamese.' That's not to be unexpected however, as any pho shack further than a 3 kilometre radius from Ansan Station is doomed to be an uninspired, oversalted and yellow-pickled-radish-accompanying affair with the wrong kind of sauce. But Dos Tacos sells food, and the food is tasty. The corn chips are roasted until crunchy, the sour cream is fresh off the hallowed shelves of Costco and the guacamole is homemade.
We also noticed that in our Coronas were actual limes, a fruit long thought commercially extinct on the Korean peninsula. Judging from this photo, I'd say that Mrs Farrand was delighted by such a fact. But I was too busy basking in the presence of guacamole to notice at the time. 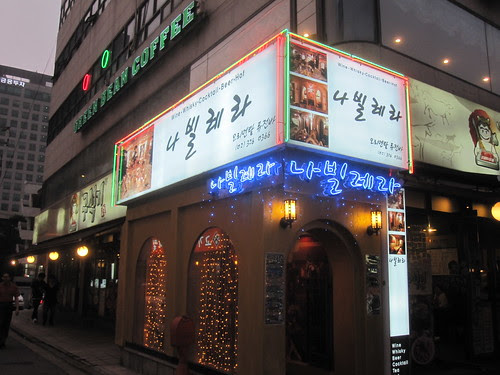 This is a basement bar called 'My Villera' in Hongdae. It's near the subway station and underneath a Green Bean Coffee shop. 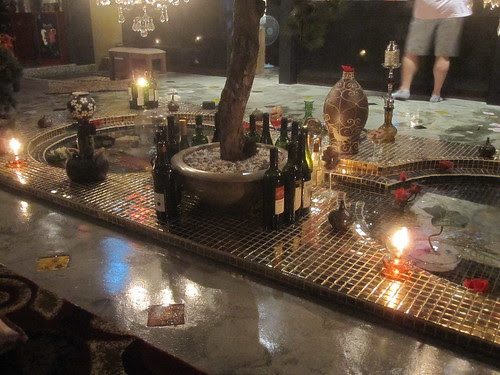 The interior is quite nice, with little water features and lots of candles. 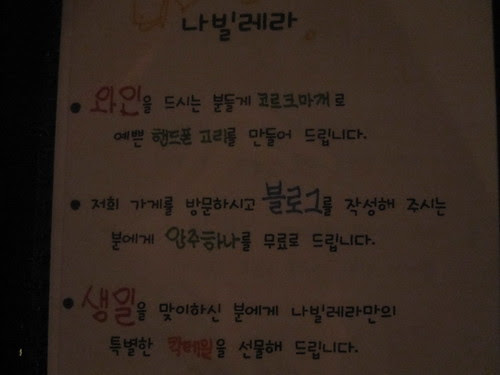 Now this is interesting. On the first page of the menu is a little announcement, saying that if anyone publishes a post on their blog about the bar, they'll receive a free sidedish on their next visit. We queried the manager (who doesn't speak much English) and the way it works is that you're supposed to make a post about it, and then show him on the computer behind the counter on your next visit. 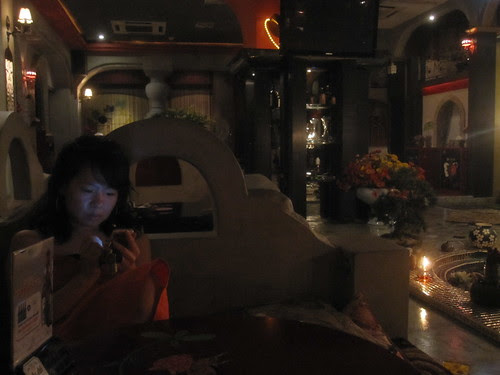 In consideration of  the combined conflicting elements that are my determination to receive the aforementioned sidedish of dubious monetary value as well as my inherent aversion to misrepresenting commercial venues as anything other than accurate, I have deemed it prudent to encode my actual evaluation of the premises with excessively verbose linguistic nuances. It is calculated that this will render impractical or at least ensure numerous inadequacies of coherence within the output of an inevitable online translation attempt by management upon our next visit. 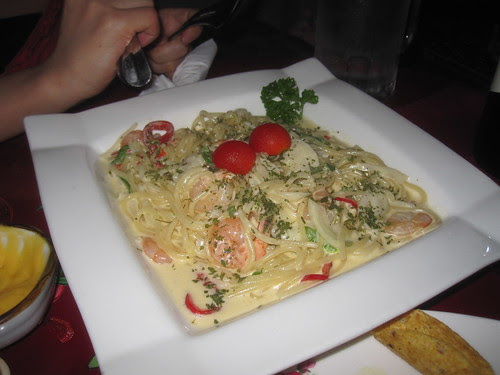 The wine repertoire was moderately biased toward a Francophone preference, but noticeably exacerbated by inflated fiscal requirements that would necessitate an upper-middle income earner feeling the urge to splurge on something that could be obtained elsewhere without such a requirement. It was duly noted by this self-referencing author and his companion, that they were indeed the dual and hitherto only patrons of the establishment at that particular period of chronological interest. After perusal of the traditional document enlisting gastronomic offerings and their descriptions, as well as discussion revolving around the not unreasonable suggestion to prematurely alight from our initial venue selection due to the aforementioned fiscal requirements, it was eventually decided that a carbonara pasta was to be ordered, along with a reasonably-sized aliquot of fermented grapes. This author deems it unnecessary at this point in time to further explore a tempting tangential discussion on the frequent futility of verbal debate with our happily opposing gender, an experience not uncommon to a male in wedlock.
An indeterminant period of time later which, if memory serves correctly, was sufficiently extended as to accommodate a comprehensive recitation of the entire contents of 'A History of Western Philosophy' by a philosophy enthusiast with an eidetic memory, we received our dish. Although initially promising on visible aspects alone, the opinion of our gastronomic selection soon metamorphosed into the culinary equivalent of a wardrobe malfunction.
I trust that our experiences have hereby been communicated to the reader effectively. 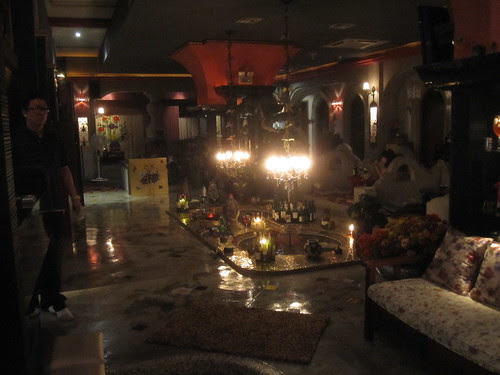 Heather and I stayed around for a little while, and then went home. That night we stayed up watching Season 2 of The Big Bang Theory.
I'm looking forward to finding out what kind of free sidedish we'll receive upon our next visit to 'My Villera.'
Have a good weekend everyone.
Posted by Lee Farrand at 2:14 pm

I think more restaurant reviews should be like yours :-)

Just read a few of your most recent blog posts. Congratulations on the baby announcement. Loved the bit about the concrete bridge pillars! The restaurant review was priceless and the photos were great. As always, a good read.