IKAA is a collaborative umbrella for Korean adoptee organisations around the world. Every three years since 2004, gatherings have been held in Korea to bring everyone together under one roof. This year, that one roof was the Lotte Hotel Seoul, a nice venue with a lot of chandeliers. 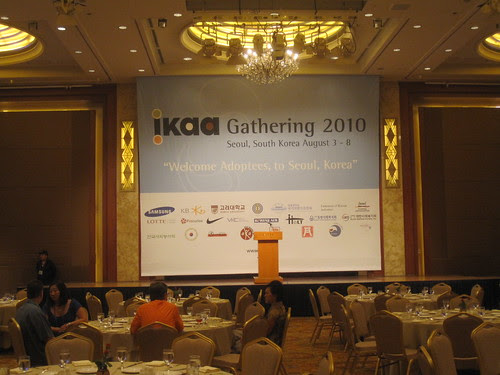 The organisations that form IKAA are all run by Korean adoptees, rather than adoptive parents or adoption-related agencies. Amongst the adoptee community, there's a broad spectrum of views on transcultural adoption, with some vehemently opposed to it, and others who think that it's the best solution to an unfortunate social problem. Korea has some strong cultural elements that put pressure on single mothers to relinquish their babies, while various social taboos here discourage domestic adoption. Although I wouldn't say that I regret being adopted, I do wish that the issues involved were more openly discussed in Korea. And I think acknowledgment is well overdue for those who are doing something about it. 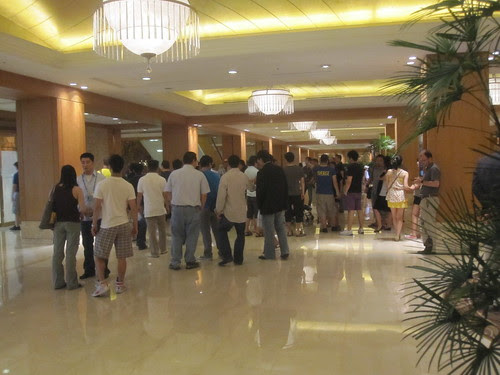 The last time I saw a bunch of adoptees in a hotel lobby was three years ago, at the 2007 Gathering. It brought back distant memories of my bemusement while walking through a group of Korean-looking people speaking fluent Norwegian, Dutch and Swedish, and feeling like a foreigner amongst them. 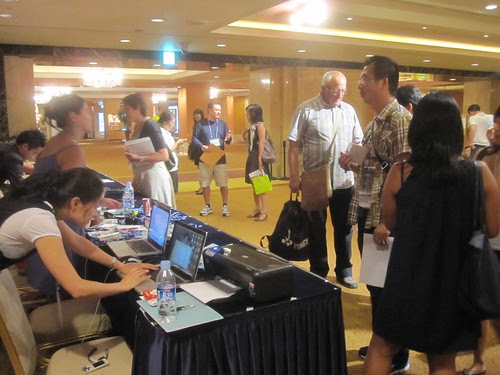 The whole gathering was put together with the sweat of hard-working volunteers from across the world. At SRTM, we had to send about seventy emails back and forth, just to organise a wine party for one night.
My estimate for the number of emails that were needed to organise the 2010 IKAA Gathering is between 6,000 and 8,000. 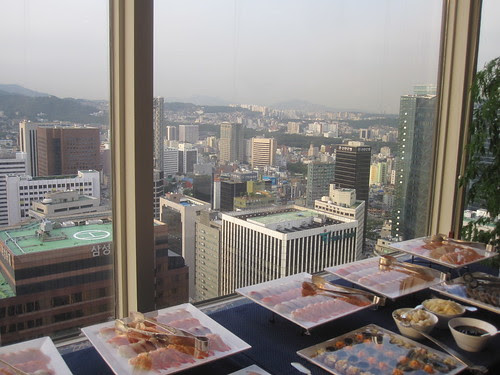 We occupied a few floors of the Lotte Hotel for various meet-and-greets, as well as symposiums and workshops. I was on a panel for advice about working in Korea, which seemed to go fairly well. The summary of what I had to say was along the lines of 'proceed with caution.'
This country is a nice place to live for a variety of reasons, but like any place with a lot of Koreans, it can occasionally drive you nuts. 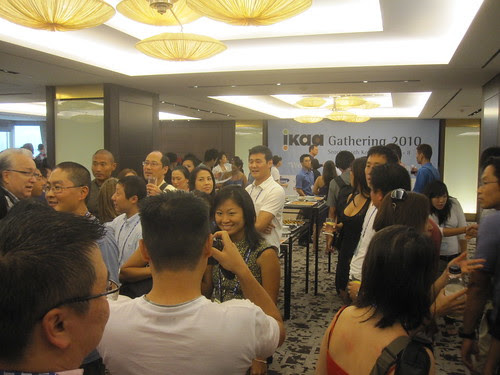 At the first meet-and-greet, I saw a few familiar faces from some of my earlier adventures in the motherland. Most of those adventures involved fruit-flavoured soju cocktails. 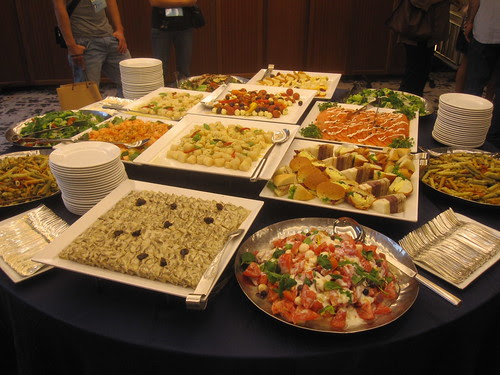 The food at IKAA gatherings is always amongst the best that a cash-starved Korean adoptee graduate student can hope to consume. If I wasn't an adoptee, I'd pretend to be one just so that I could eat the food. 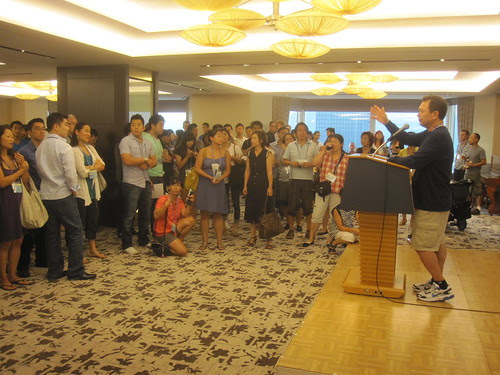 On that podium is Tim Holm, the president of IKAA and a man who can make the logistical mess of a gathering on such a grand scale coagulate pleasantly. The feat could be likened to gathering billions of tangled computer power cords and combining them all to form the perfect image of a daffodil. 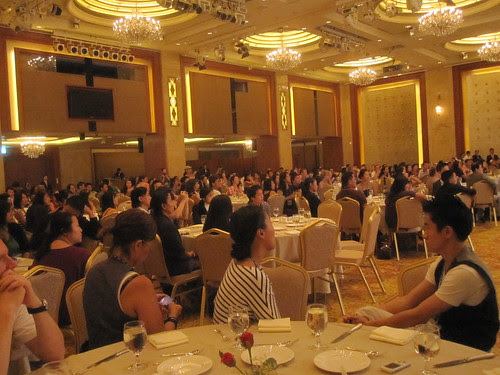 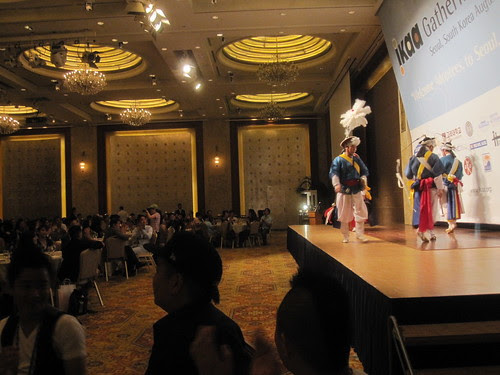 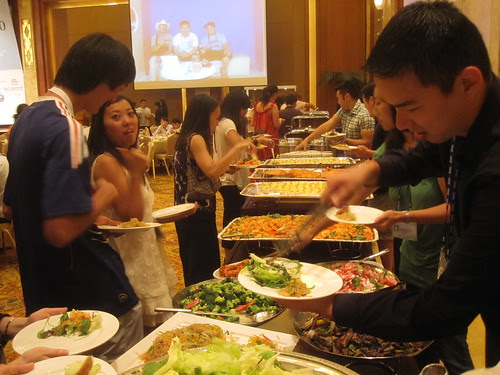 I've optimised by buffet strategy over many years of buffeting. On a side note, I think the letter 't' is pronounced in the word 'buffeting'. What do you think? Anyway, my buffet strategy involves the following guidelines:

1) Avoid rice, bread and anything that looks like it has flour. Break this rule if every other option looks terrible.
2) Use lettuce sparsely, as it is very demanding on plate real-estate. Lettuce leaves can be placed on top of other items, to make it look like you've made healthy choices.
3) Arrange any items with sauce or gravy on your plate so that they are separated from each other, with no possibility of cross-saucing. Explain to your new table friends about your accomplishment. 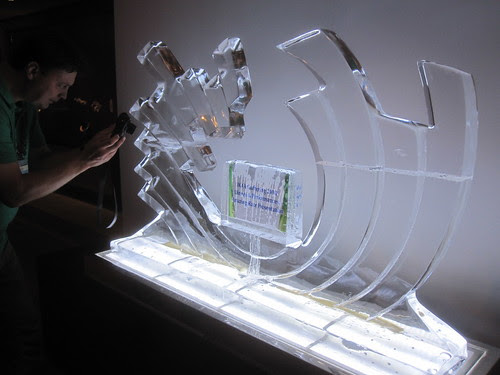 Here's an ice sculpture that was made for the occasion. 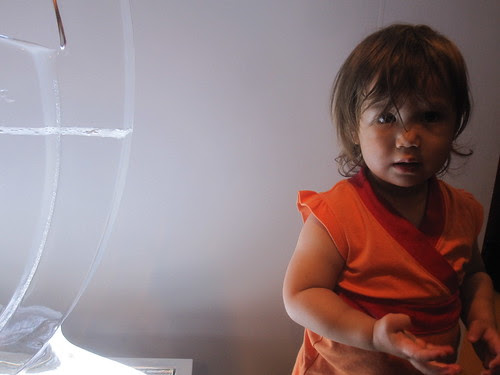 And in the picture above is Liselotte's impossibly cute little daughter, who enjoyed melting what she could of the sculpture, using the heat of tiny palms.
I was tempted to explain to her about the thermodynamics at play when she puts a palm on ice, but I had a feeling that it would have been a waste of time. Especially seeing as she can only understand Danish.
Part 2 coming soon!
Posted by Lee Farrand at 3:36 pm

I'm really glad you're posting about this. I thought about attending, but too much of it overlapped with my class/work times. Plus, I haven't really jumped into the adoptee community (and am not sure if I ever will...) At least this way I can live vicariously through your blog.

Nice to know, Kim. We still need to get a beer sometime...

While this has traditionally been the most common justification and rationalization proffered by adoption agencies as to why so many Korean women were willing to give up their children, it is no longer true today, and such justifications in the past are being exposed as mostly pretextual. The fact is that the majority of Korean children offered up for adoption since international adoptions became commonplace after the Korean War, were mostly children abandoned by their biological parents and birth families for financial reasons. This kind of justification and rationalization goes deep, as it panders to an ingrained Korean belief that the needs of an extra child should never outweigh the needs of the rest of the family. (Many Koreans believe that it is honorable and correct for one member of the family -- usually the weakest and least capable of defending themselves -- to sacrifice themselves, usually without any say so or choice in the matter, for the rest of the family. Of course, in the rest of the world, this is simply called casting aside or getting rid of the weakest members of society as they have no value to us.

Now, due to the popularity of abortion-on-demand, along with the repeal and elimination of the family registry system, or 호적법, in 2005 and 2008 respectively, single Korean women nowadays confronted with the possibility of unwed motherhood can either procure relatively inexpensive abortion services, or -- if she chooses to be a single mother -- can legally file for head-of-the-family status on her own, i.e., file for a legal identity for her children without the need of a husband, effective as of 2008.

What this means for the future of international adoptions, along with the Korean government's plan to eliminate all out-of-country adoptions by 2011, is that Korea is definitely feeling the brunt of international pressure and the concomitant shame associated with a society that seeks to rid itself of inconvenient problems in the most cost-effective way possible instead of solving them head on.

Ha, ha, nice comments on this Gathering, that was the third for me. Very interesting to compare those three events that took place while my son attended (with me i korea) as one year old, four year old and this gathering as seven years old. I perfectly identified myself with less use of camera and scanning the audience for veterans. I do believe very few came, like me, three times in a row in korea. For me it is an opportunity or excuse to bring my son to see where I come from, since he is my new family and I don't seek any bio from the past. But each gathering has its own spirit and the first one had its own momento, because of its novelty, the media attention and public awareness that adoptees flew in to meet and talk about adoption matters.

I remember some even where approached at the first gathering with bio families who searched in hope that their abandonned child was amongst the crowd...

I remember looking at the waiterstaff thinking, he could me my relative, sibling etc. But recently I thought, Uh since adoptees can romantically mingles, better look out, that hes not your brother in blood, which is totally new dimension having so much fun with adoptees.

So better date someone who does not resembles you and that has knowledge of its biofamily, since I don't have...

Well I loved the gathering this year because I bonded with some people I never imagened I could feel a community sense of feeling with. Some even from my own national beloning (danish) which was new for me... to go out in the world to befriend someone who lived half a hour away by bike, because we both were attending the gathering and not just another anonymous member of the koreanclub in Denmark.

Thanks for your always subtle, but yet nice humour. I loved the buffet-story... All though I do the opposite. Scoop in vegi stuff, but Im a girl/woman.

Thanks Mee Ja, glad you had a good time