After the opening ceremony and associated pleasantries, the IKAA Gathering gained altitude and seamlessly switched to supercruise mode, which consisted of a meticulously pre-organised program of events. I was unable to attend for most of the week because I had cell cultures to attend to, but I made it out for the adoptee literature session. 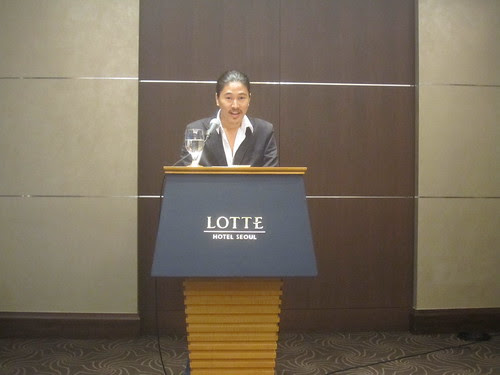 Here's our old friend, SK Chae, giving a prepared speech about his book, Remembering Koryo. For a man who is more well-known for eating dinner using only a knife rather than for his penmanship, he summed up the purpose of his book with surprising clarity. 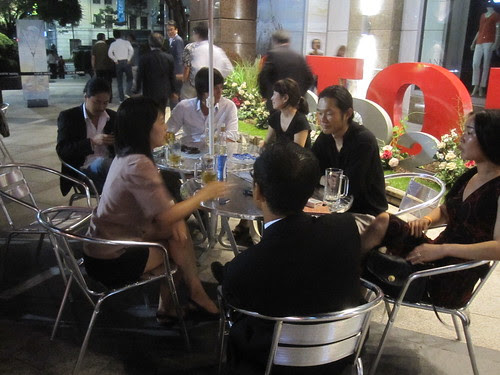 The warm summer nights of the gathering were mostly spent drinking beer. In the photo above are some well-known faces in the KAD community. 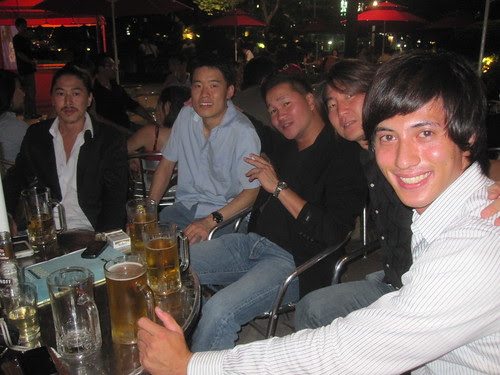 In this photo there are two Danes, a Frenchman, an Australian and an American. Can you tell who's who?

It's all about the hair. 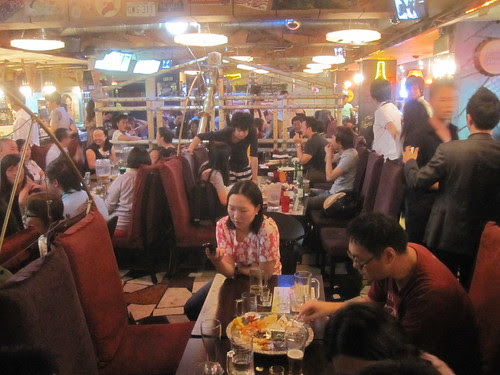 And in this photo, every single customer is a Korean adoptee. We reserved a local bar for the night and filled it with raucous chatter from a smorgasbord of languages. 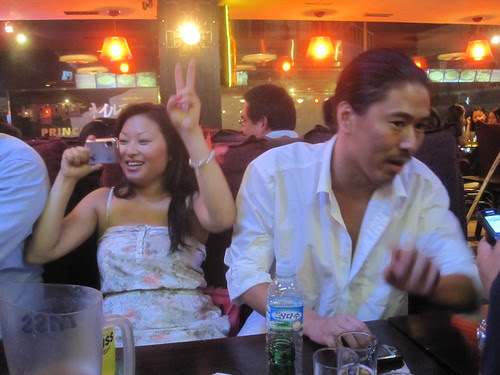 Fun was had, and tall tales told, respectively. 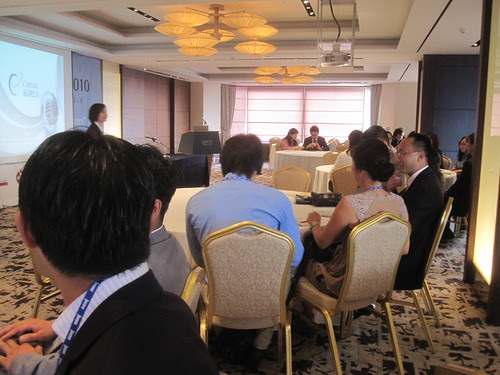 The sessions during the week that I attended were mostly helpful workshops, in which I feigned sobriety. 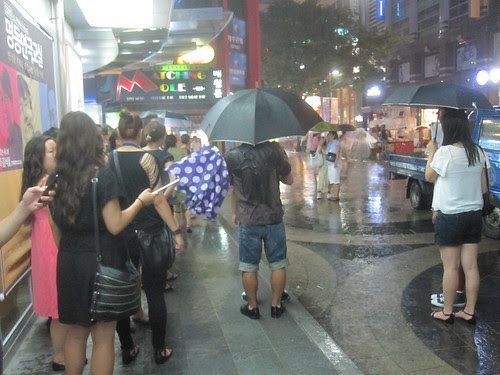 For this gathering and the last one, there was a mini adoptee World Cup tournament held, with the various organisations putting together teams. This year, the Danish team were victorious. Upon going with them to celebrate, I learned that Danes enjoy drinking and singing/chanting Danish victory choruses. We Australians celebrate victory in a similar manner, but without the singing and chanting.
The night started off slowly because nobody knew of a bar in the Myeong-dong area that would accommodate thirty adoptees in a celebratory mood. After forty minutes of walking through unrelenting torrential precipitation, we decided to seek shelter next to an inadequately-verandahed department store. Half an hour later, utterly drenched, but spirits undampened, we found a bar with enough space. If we were in Spain, I would have quipped "the rain in Spain falls mainly on the Danes. "
But we were in Seoul. 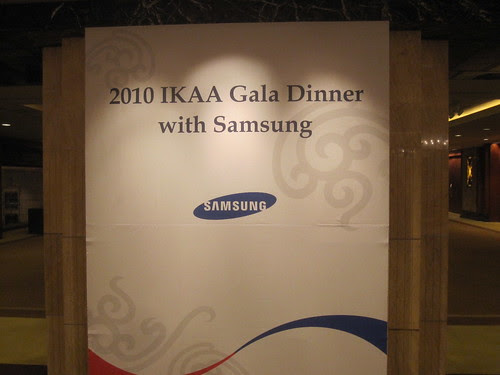 Samsung have supported IKAA considerably over the past, and this year was no different. They usually pay for the final dinner, which is a flashy set course menu with free-flowing wine. 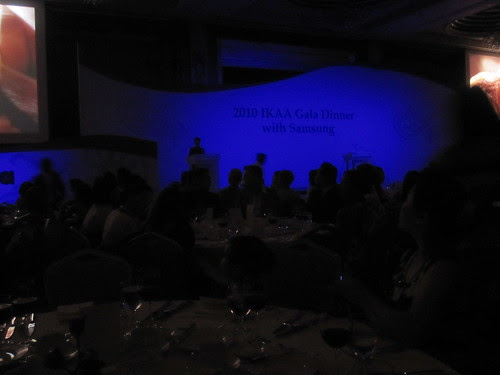 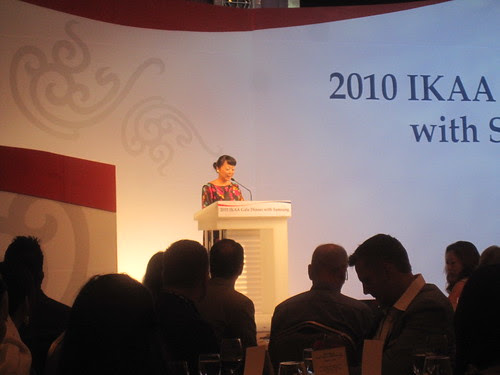 Just like last time, we were treated to professional performances with Ahn Jung-hyun as MC, the lady who used to host the Arirang talk show Heart to Heart. 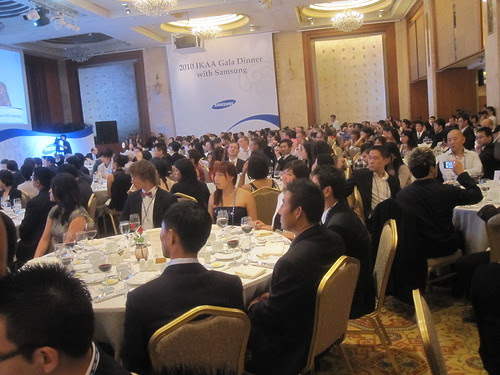 More than 500 Korean adoptees from across the world converged in formal dress attire. 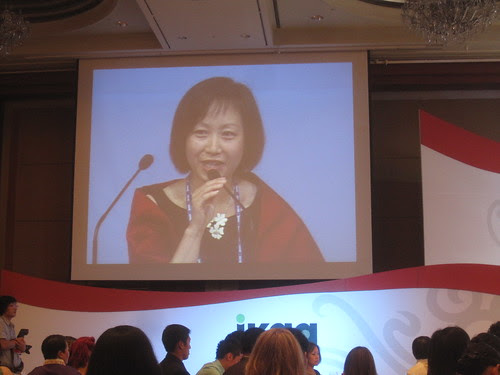 Here's Liselotte Haejin Birkmose, whose ice-sculpture-melting daughter we saw in the previous post. I've only said hello to her once or twice, but she seems very friendly and nice. 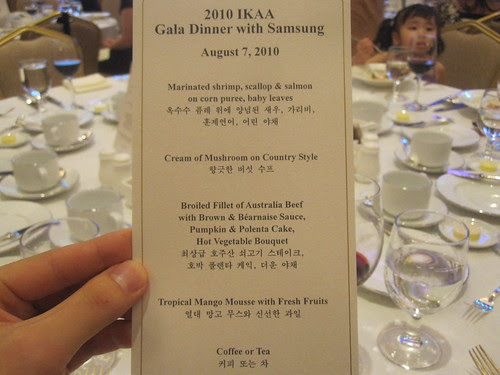 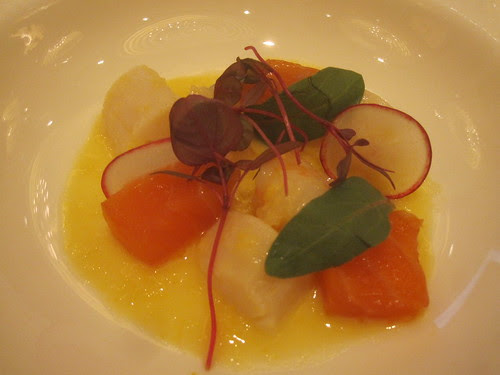 The menu was enjoyable, although I had no idea what Bearnaise sauce was. Tasted good on Aussie steak though. Back home, we'd just slap that kind of meat on the barbie and eat it with tomart'oh sawce. 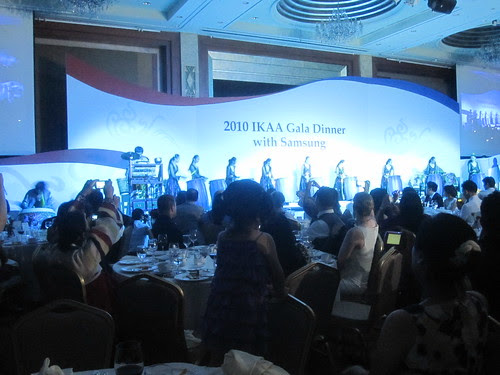 And there was some good old Korean drumming to bring out the warrior in all of us. When I hear Korean wooden drums, I guess I should be reflecting on the vibrance of Korean traditional music, but all I ever think about are orcs. 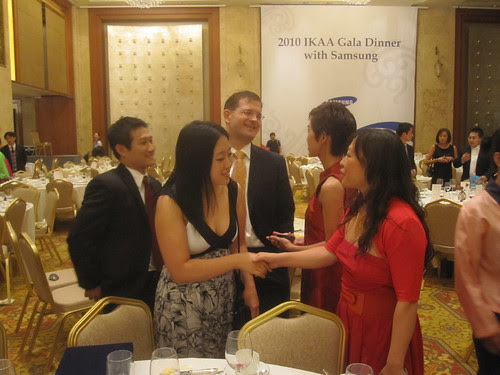 Facing to the right in this photo are Daniel Moore and Sarah Kim Randolph. Sarah used to blog well, but I think she got busy. Maybe Daniel has something to do with that. He also reads this blog, apparently, and told me he likes my 'one-liners'.
Possibly like this one. 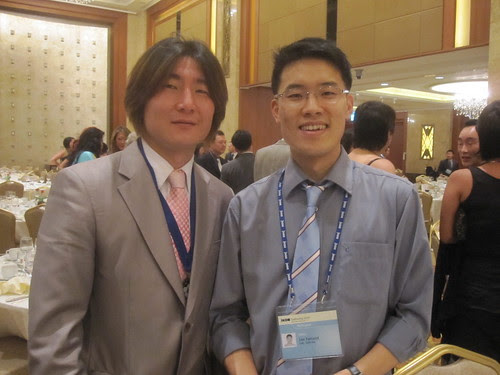 And here's me and Tae-Yang, a Dane and a good friend. Tae-Yang comes back to Korea almost every year and it's always the same beautiful story.
Hug. Talk. Eat. Drink. Laugh. Drink. Hangover. 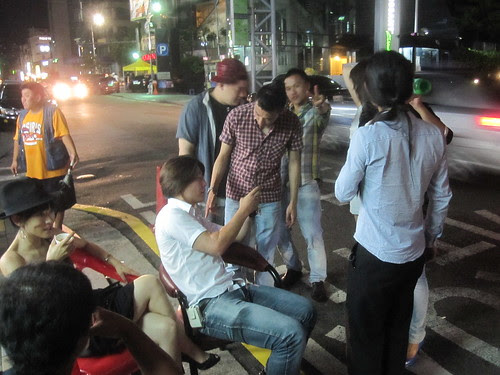 Adoptees in Korea are funny. We set up a drinking station outside Family Mart and spent the hot summer night getting better acquainted with Cass, soju and makkeoli. There were a few Korean passers-by who gave us second glances due to our sprawled roadside gathering, and we simply returned those glances with a friendly air of aloofness.
If we were in Japan or China however, we probably wouldn't feel as entitled to 'make ourselves at home' in public. 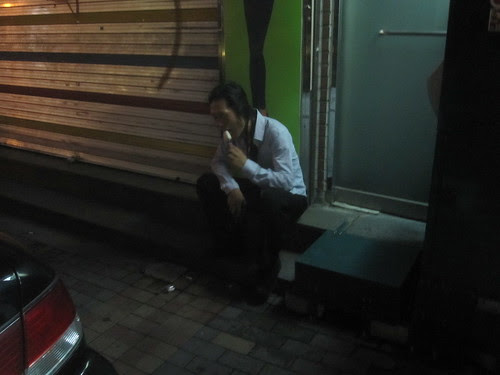 It wasn't long before the cheap alcohol began weaving its confusing magic, and we soon felt like eating ice-cream. That's another reason why Family Marts are good places to drink. In the photo above is Jes Eriksen, a Dane whose first name is pronounced 'Yes'.
The old rule of thumb is that an adoptee gathering is a good one 'if it ends with some guy called Jes enjoying an ice-cream by the side of the road. '
And by that standard alone, I'd say that the 2010 IKAA Gathering was a successful one.
Posted by Lee Farrand at 5:48 pm

Haha, hello from Seattle! It was great to see you and meet your lovely wife last month in Korea. =) I always enjoy your blog, and these Gathering posts are great. Sums up the week nicely. Hope to see you again sooner rather than later.

Wow, wish I could have been there.