Since as long as I can remember, my Dad has always been typing away at something. We used to own an Atari, long before computers became cool. It was a pioneer machine, before black and white, with brown coloured text on a black background. And it took real floppy disks, the 5.25 inch ones that you could muck up with a fridge magnet.
All of that typing on ancient computing equipment has cumulatively paid off in the form of a book he has just published, called 'A New, Objective, Pro-Objectivity Normative Theory.' 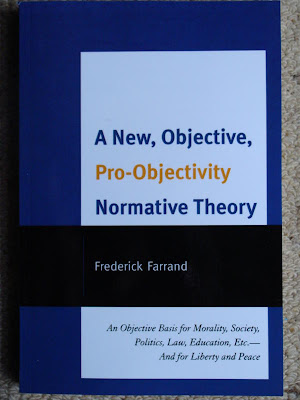 His field of expertise is objective philosophy, and he's always talked about improving the world. I'm sure the book has quite a few pearls of wisdom contained within, but I haven't finished reading it myself. It's aimed at people with a specific interest in philosophy and I find it to be quite heavy in philosophy jargon. If you're not familiar with the work of Immanuel Kant, Bertrand Russell or concepts like epistemology, then you'll probably find it a little intellectually challenging. Still, being the good son that I am, I'd like to pimp it for him and tell you all to buy it regardless. I therefore recommend it for all ages, genders, ethnicities and persuasions.
If you don't like it, you can always wrap it up and turn it into a great gift. 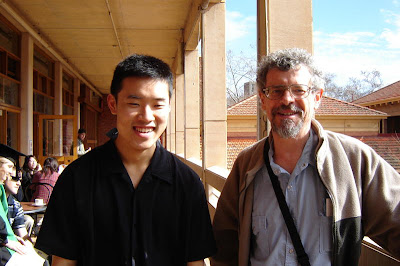 Here's a photo of me and my Dad, at my old university in Australia quite a few years ago.
This is his brief description of the contents of the book:
"A New, Objective, Pro-Objectivity Normative Theory tries to solve fundamental normative moral, social, political, educational, legal, etc. problems. It defends a uniquely evidence-based, objective theory.

The theory argues it has one objective, primary end, and plural a-objective, secondary ends irrelevant to that end. The theory's basis permits great liberty as well as cultural, sexual, artistic, lifestyle, and much other diversity regarding secondary ends. The primary end is a general principle implying non-sexism, non-racism, types of happiness, freedom, education, sympathy, peace, democracy, altruism, flourishing, fairness, and much more. Emotions and various other subjective experiences are considered important.

Part II discusses such specific practical applications at length. Part I mainly explains and defends the theory's foundation and general guidelines. One guideline prescribes applying the theory's rationally-critical approach to the theory, stressing that fallibilism and skepticism may be appropriate regarding some suggested specifics - but that future research can increasingly avoid problems here."
If you think you're up for something that's bound to challenge your comprehension abilities, you can buy his book on Amazon for $21. The link is here.
Happy reading!
Posted by Lee Farrand at 5:22 pm

It's now on my Amazon.com wish list. Congrats to your dad! I look forward to reading his thoughts.

Usually I follow your science jargon well enough, but this entire post, particularly paragraphs 4-6 are more or less incomprehensible to me. Me and philosophy never got along so well in university...

That's great to hear Kevin. It's rather complex though and written in a specific style. I myself have problems digesting its true scope.

Jo, I recommend you buy a copy and give it to your boyfriend for Christmas.

Complexity is our friend! I was in religious studies, after all, so I had to digest plenty of philosophy, from classical Greek thinking to analytical philo to the painfully garbled nonsense that is postmodernist "thought." Not to say that I feel totally at home when tackling pure, raw philo; one blog I read routinely leaves me feeling as if my brain were about to explode (here's a sample post from that blog, just so you can feel that feeling, too).

In philo, it's often necessary to go backward before going forward: if one encounters a term or set of terms with which one is unfamiliar, a bit of background reading may be necessary before one can make it past the passage on which one is stuck. I had trouble slogging through Bernard Lonergan's Method in Theology for that reason: the book assumed that the reader had read Lonergan's previous works, and employed concepts that, for the uninitiated, should have been more carefully unpacked. (Lonergan on method: "A method is a normative pattern of recurrent and related operations yielding cumulative and progressive results." That's pretty clear. But then there's this doozy: "A term of meaning is what is meant." I still have no idea what that means.)

Philosophers tend to operate in several different modes. Sometimes they're building on their own previous thoughts. Sometimes they're teasing out the implications of the thoughts of others. And very often they're reinventing the wheel-- crafting and using their own terms as they create (or should I say describe?) complex metaphysical structures. Sometimes the only way to decode and navigate those structures is by reading their earlier work; otherwise, it's a bit like stepping into the middle of a conversation between strangers. That's probably why I resented the profs who made us read works like Heidegger's Being and Time or Gadamer's Truth and Method without prepping us for those torrents of unfamiliar vocabulary.

I'll be sure to tackle your father's book with the respect it deserves, complexity and all.

I haven't read a lot of philosophy, but I think I passively inhaled it in my younger years. What I think is more enjoyable than contemplation itself, is watching other people while they contemplate. I once saw my Dad staring out of the lounge room window one day, then after a long period of silence, he suddenly announces out loud "Hmm, that's interesting."

I wish the Korean monks would do that every once in a while during ch'am-seon, but they tend to save their off-beat moments for the dharma talks.