One thing that exports more effectively than BMWs or Gaelic Football is a thinly-veiled excuse to drink. When I was living in smalltown Australia, although only some of us had heard of Mercedes or Hurling before, everyone knew what St Patrik's Day was. 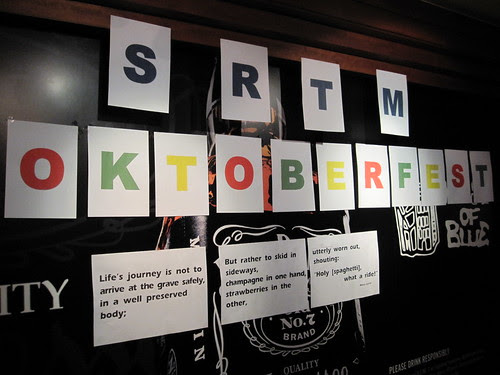 The South River Toastmasters decided to hold an Oktoberfest (spelled with a K for authenticity) last month, for two reasons. Firstly, because it was October, and secondly, because who can say no to beer and sausages?
Certainly not us, it seems. 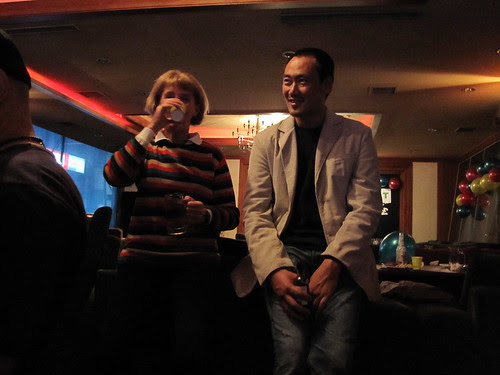 On the left in this photo is SRTM's very own mother, Jenny Vrontakis, and on the right is our 2009 Wedding co-MC of the year, Chris Lee. We're all one big happy family, except for sometimes when an odd member goes a little nuts.
I was jokemaster of the night, tasked with lightening the mood with a little humour. Finding good clean jokes online can be a huge challenge these days. For a start, they're mostly not good or not clean.
But I managed to find two pretty good ones in the end, which were delivered with a bit of added flavour. They're a little long, but here they are, for your humouring:
Joke 1: A man dies and goes to hell. Upon reaching hell, he is greeted by a rather affable and upbeat Satan. Satan says to him "G'day mate. Welcome to Hell. Because I'm a good bloke, I'm going to let you choose which room you want to spend the rest of eternity in." The man thinks it's not such a bad offer and asks "Can I see the rooms first?"
"Sure," replies Satan. The door to the first room opens. Inside the room is a crowd of people, standing in a pit, up to their chests in raw sewage. The stench is unbearable and everyone looks miserable.
"Okay, that's pretty gross. Let me see the second one" says the man. The door to the second room opens. The situation inside is very similar, with people standing in a pit, but this time, everyone has raw sewage right up to their nostrils, and they can barely breathe.
"I see. Well, show me the last one then" requests the man. The door to the third room opens. The people inside are standing in a pit of sewage, but they are all drinking coffee. Furthermore, the raw sewage is only up to their knees.
"Oh, wow. I'll take this one" exclaims the man. Satan motions for him to enter. The man goes in and is about to grab a cup of coffee, when all of a sudden Satan claps his hands in the air and says "Okay everyone. Coffee break's over. Time to get back on your heads!"
Joke 2: Three women die and go to heaven. On the way, they are greeted by St Peter, who tells them "You can enjoy heaven all you like, but if you step on a duck, you shall be punished for all eternity." The three women think it's a strange rule, but arrive in heaven nonetheless. To their astonishment, there are ducks absolutely everywhere. The first woman takes a couple of awkward steps, before losing her balance and stepping on a duck. St Peter (who never misses anything) pops out of thin air and brings forth an extremely ugly man. "Aha!" says St Peter. "For stepping on a duck, you will be forever bound to this ugly man." St Peter handcuffs the distraught woman to the ugly man and they walk off together. The second woman, having seen the punishment, tries hard to avoid the ducks. But within a few minutes, she too has stepped on one of the many ducks. Instantly, St Peter pops out of thin air with another ugly man, even uglier than the first. "Well, it happens to the best of us" remarks St Peter, before handcuffing the two together. The third woman decides to be very careful. She hardly steps anywhere and moves with the utmost care and certainty. St Peter pops out of the air after three days, although the woman had not yet stepped on a duck. "Admirable effort" quips St Peter. "As your reward, you shall be accompanied by this man." St Peter handcuffs the woman to a very dashing and handsome young gentleman. "Wow!" exclaims the woman. "I wonder what on Earth I did to deserve someone as handsome as you!"
The man replies "Well I don't know about you, but I stepped on a duck."
The Toastmasters audience seemed to enjoy them, and the night overall was quite a lot of fun. 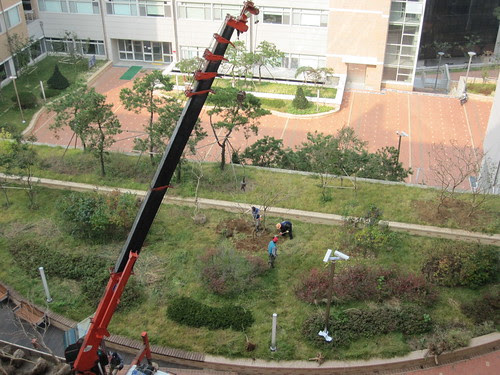 Things are moving slowly and steadily at university. We've got a pretty good view from our lab, over a garden area below. Standing and observing the goings on below from a window someplace high, happens to be one of my favourite pastimes.
It's a hobby that I assume I share with such luminaries as Donald Trump and Mr Burns.
Eeexcellent. 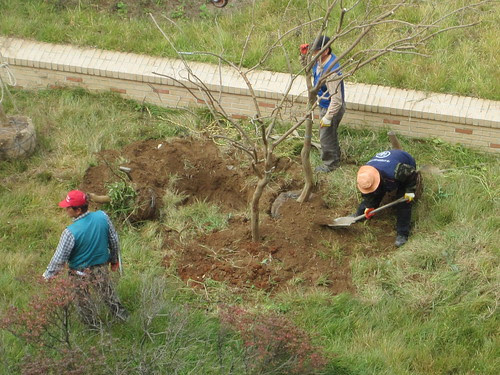 Now what on Earth are these ajosshis up to (you may quite rightly ask)? *Wasn't quite sure how to punctuate that sentence correctly. Anyhow, what those ajosshis just happened to be up to, was an activity we may like to name Tree Swapping.
Tree Swapping, you may quite rightly ask, is the act of digging up trees and replacing them with different ones. Although Korea has a jaw-dropping total of four seasons, it seems that our endemic campus flora can only handle two of them. As a consequence of such a pickle, every six months a bunch of ajosshis with a crane come and dig up our trees, replacing them with different trees that are better suited to the incoming weather.
While the author of Lee's Korea Blog questions the necessity of such a surely expensive undertaking, he cannot help but ponder the aesthetics of the storage facility where all these trees must be kept. 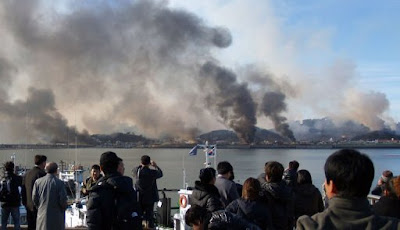 Two days ago, I peered out of my university lab window to see two fighter jets flying northwest over Seoul. North Korea shelled Yeonpyeong island, killing four people and wounding more.
I'm not a North Korea expert, and only ramble on about the insanity of the regime when intoxicated. I think it's quite unlikely that Seoul will ever be under threat, because it's plausible that the North's seemingly erratic behaviour is part of an unsophisticated blackmailing campaign and to refocus internal dissent away from the ludicrous dynastic succession. But any porcine madman and his heir apparent are capable of killing civilians to prove a point, so despite the counter-intuitive restraint exhibited by the South, I think that overall it was the wiser thing to do. However, as an armchair observer with no relation to those who were killed, it is of course, disturbingly convenient to arrive at such a conclusion. 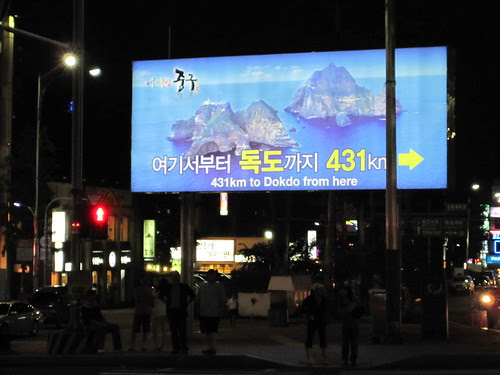 One thing that surprises me is the unbalanced response from the general public here. The nation went absolutely nuts in the middle of the Mad Cow fiasco, where it was claimed on TV that Koreans were more genetically susceptible to getting mad cow disease from US beef. Seoul's biggest protests in 20 years erupted, with police buses set on fire and 80,000 protesters converging on the city centre. Fast food outlets around the nation jumped on the bandwagon, proudly claiming that none of their meat was from the US. All this, despite the fact that no case of mad cow disease in humans has ever been linked to US beef.
And then there's two (only recently inhabited) islands in the middle of the East Sea / Sea of Japan which have been the centre of a territorial dispute between South Korea and Japan, prompting angry protests, the burning (and eating) of Japanese flags, killing of live pheasants, as well as self-inflicted finger severing and stomach stabbing in front of the Japanese embassy in Seoul.
There are some warranted ill-feelings left over from the brutal occupation of Korea, which ended in 1945. However, I don't see a fundamental distinction between whether it's the Japanese oppressing, enslaving and killing thousands of Koreans, or the Kim Jong Il regime doing the same. North Korea eliminates all meaningful dissent by interning political opposition in labour camps, while its population starves. Japanese killing Koreans in the past and Koreans killing Koreans in the present, should both be viewed with equal discontent. 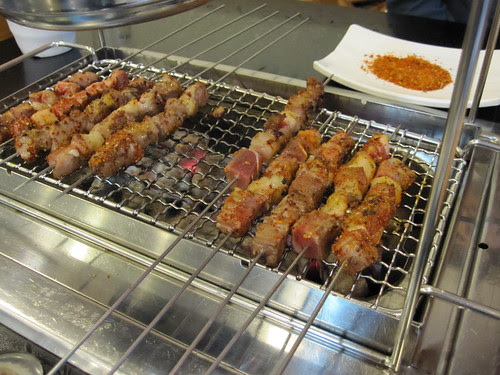 But as a mere mortal whose opinions are limited to a tiny blog drop in the ocean of cyberspace, this author has long since realised that such ranting is to little overall avail. For better or worse, life goes on relatively undisturbed for the majority of Seoulites.
One thing that seems to be gaining traction here is lamb skewers.
They're quite delicious. 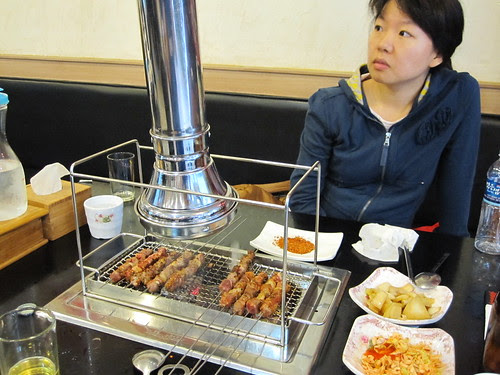 Heather and I recently discovered a lamb skewer hideout near our dwellings. There's a few places open around here and a good one in the Gangnam area. Lamb is not such a popular meat in NE Asia, because it apparently has a strange aroma to those who haven't encountered it before. 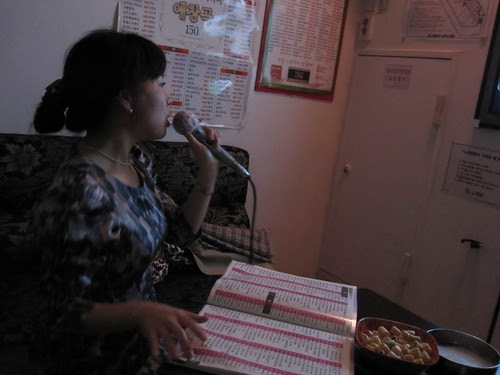 And here's my lovely wife, singing unintoxicated, and oblivious to the maddening threat in the North. Sometimes it's better to just sing a song than analyse the world's more pertinent issues.
Always look on the bright side of life, eh?
Posted by Lee Farrand at 1:51 pm

noraebang un-intoxicated is something I can't really get my head around... but I like your use of "eh".

Best wishes to you, Heather, and your Big Baengy!

Thanks John, and Claudia!

I am very happy with this blog, I can learn more about south korea .. hahaha ^ ^

how the current situation of South Korea?
I have a dream to go there,, hahaha
Of course, it would be nice ^^d

Any pointer to the lamb skewers restaurants locations ?

The directions are a little complicated. There's one in Gangnam, a couple in Nakseongdae and one in Hongdae. You would need to get someone to show you.