Half the fun of participating in a company-sponsored foot race is psyching yourself up for the big day. Our ritual includes telling everyone we know that we've signed up, reminding everyone who has already signed up that we're running together, and going shopping to purchase a range of arbitrarily necessary running gear. 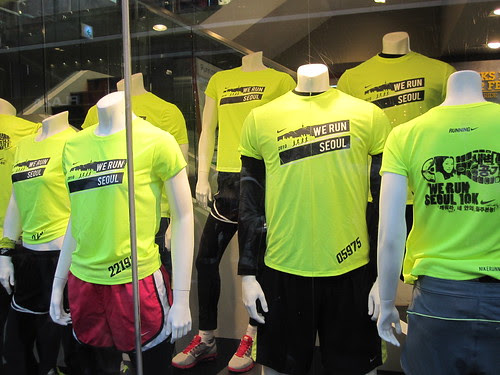 The latest event to go under our belts was the 10km Nike: We Run Seoul event held a few weeks ago. Of all the runs we've done in Korea, this one was probably the best. The course was a nice circuit around the Han River, the shirt was intelligently coloured and they didn't send us too much commercial junk in the mail. 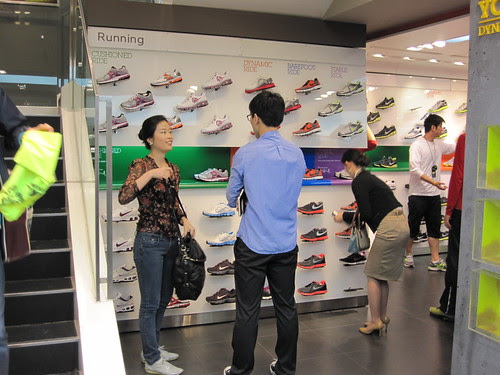 A week before the big day, the part of my brain responsible for thrifty acumen reminded me that a fellow SRTM member, Yooshin Lee, works for Nike. So I pitched him an investigatory email to see if the waters were favourable for employee benefits. Yooshin pinged me back shortly thereafter, informing me that he could obtain a store-wide 30% discount for any member of SRTM, just by raising his eyebrows ever so slightly at the store clerk. 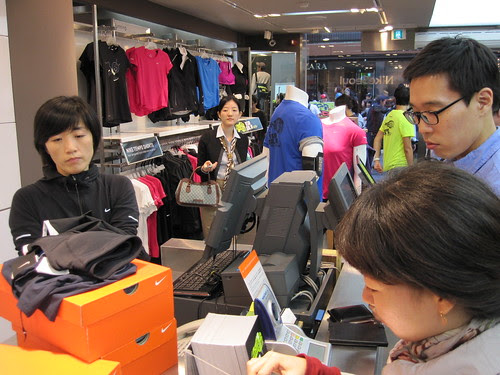 So Heather, Sunny, Jieun and I met him at the Myeongdong Nike store and we all bought new shoes and various other discounted goodies. Yooshin accompanied us to the cashier and raised his eyebrows at the clerk. Unfortunately the clerk didn't pick up on the signal. So Yooshin discretely tugged his left ear and wiggled his nose a bit. Seconds later, a whopping -30% came off our grand total.
Thanks Yooshin! 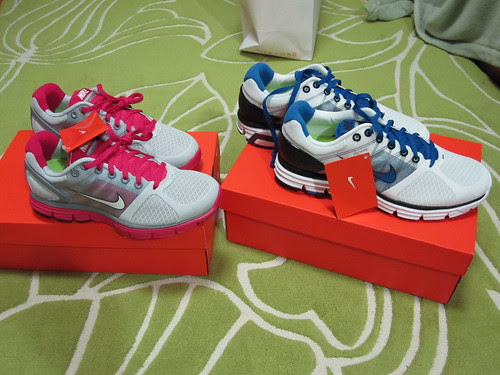 Heather and I both bought the Nike Lunarglide model, which are popular jogging shoes, so says Yooshin. They have excellent arch support, and are extremely light weight and comfortable. They're also the first Nike shoes I've ever owned, after a long stint purchasing running shoes from the $20 bin at ABC Mart (the Korean version of Captain Spendless in Australia). I've run in them a fair bit now, and they're really worth the extra cash. But I know what you're thinking.
Couple shoes. How cute. 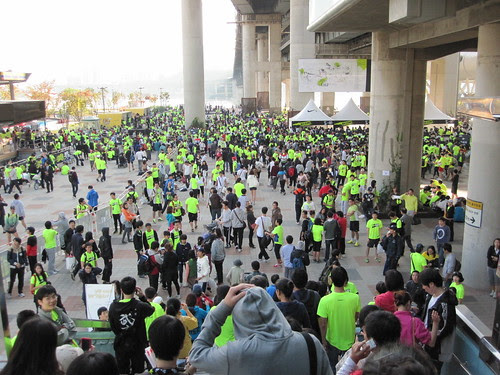 We arrived at the venue a little later than expected and only had a few minutes before the race started. This was due in part to a member of the Farrand household who shall remain nameless, insisting that we had plenty of time to make it out to Ddukseom Resort by subway, and that I shouldn't rush her and there was plenty of time to sort out our enormous bundle of recycling first.
But I made it to the starting line before the gun went off, so I guess there's no reason to complain. 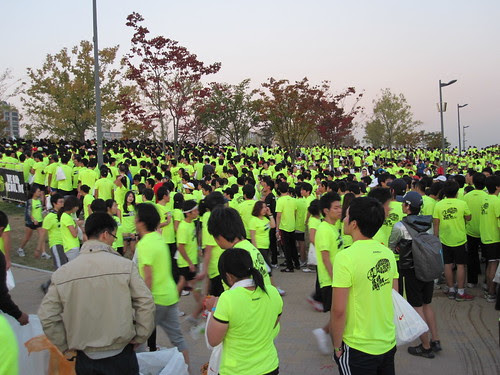 Between this photo and the last, was a 10km run. Torn between the urge to photoblog the race and the desire to run a new personal record (sub 50 minutes), I eventually decided to entrust my favourite Canon to the Nike Bagminders.
The run was along the Han river, including two bridges and was fairly flat. But I found it pretty tough, especially towards the end. Usually at around the 5km mark, my thighs start pumping battery acid, and I have to stick it out until the endorphin rush kicks in.
But this time, for reasons unbeknownst to myself, the endorphin fairy wasn't in the mood to visit. I guess she was busy sprinkling dust on all of the other 20,000 runners. 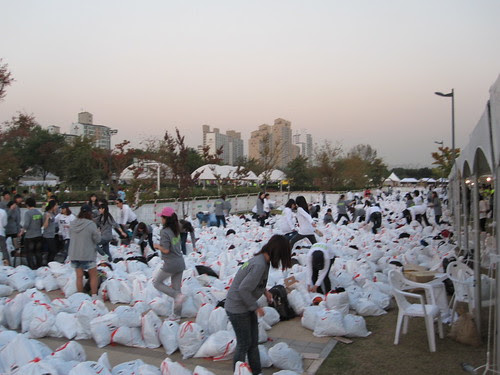 With the race over, I hastily consumed a complimentary bottle of Powerade before making my way to the Bagminders. One thing I've noticed in Korea is that the race organisers here all seem to suffer from sub-optimal bagminding technique. Time and time again, I've been left waiting for my bag, post-race, long enough for my steaming body to be reduced to a silvery shiver. 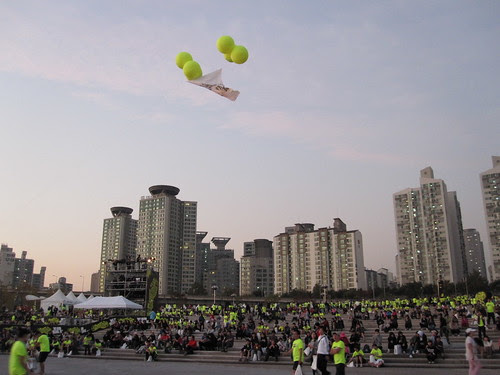 But I got my bag in the end, and all was well at Bag End*. We then went off to enjoy one of life's most delectable luxuries, which just happens to be Korean galbi** after a 10km run.
* A reference to the works of J.R.R Tolkien
** Korean bbq ribs 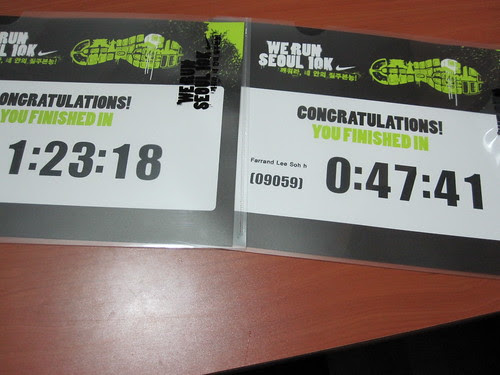 We received our certificates in the mail today, and I'm still feeling the dizzy afterglow of a new personal record (47:41). Heather also did very well, considering she was running for two.
I also ran faster than Heather's younger brother that day (who politely whipped my buttocks in the Energizer night race), but alas, the victory was bittersweet because he was recovering from a fractured rib that day, incurred during baseball practice.
Hmm, running with fractured galbi? Now there's a tough man.
I'd better keep in shape for the next one.
Posted by Lee Farrand at 9:07 pm

Well done, Under 50 min for 10k?! Now that you've experienced the wonderful world of Nike running shoes (always been a New Balance guy myself), try out the Nike Free Run's next time. They're meant to mimic running barefoot. It's my first pair of Nike's in a while and it's such an interesting feel but so light and comfortable!

Thanks, yes I did see those.. but ended up opting for convention. A lot of the Ethiopian champions grew up running without shoes for much of their youth.