Nanoomi is a community website supported by Tatter & Media. Its purpose is to bridge the English language K-blogging community with Korean readers by providing a focal point where everyone can cross-post their goodies. Some of the articles, like our review of Resilience, can get nominated for translation by some rather nice and mysterious volunteers.
If you haven't been to the site yet, you can hop over there by clicking here. 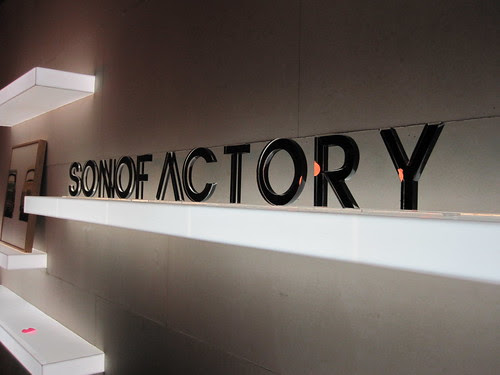 Last weekend, they held a party, which I'm posting about early. I usually get around to posting things about 2 weeks after they occur, but this one is going up early because parties always sound better when fresh.
The event was held at Sonofactory, a nice cafe in Hongdae. 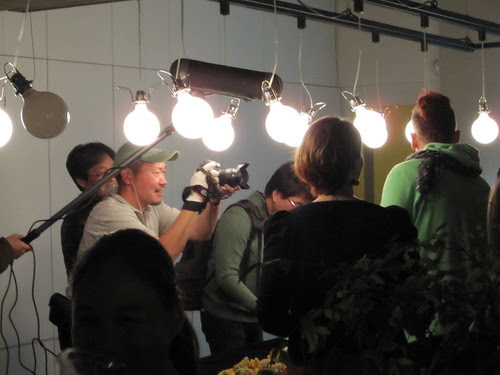 Upon entering the venue I saw two popular personalities being interviewed. Martina and Simon are the famous Eat Your Kimchi duo, churning out popular video clips every week. One of my favourite clips is this one, of the Jagalchi Markets in Busan. 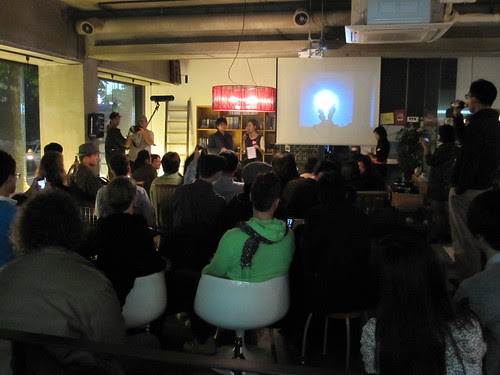 While I still haven't figured out all of the intricate workings of Nanoomi, I've already reached a few conclusions. The guts of Nanoomi are kept in perpetual dynamism by two impressive young ladies called Cynthia Bae and Hannah Yoo. These two work in parallel to supply all of the necessary mental nutrition that a K-blogging community needs in order to flourish in a cohesive manner. Such nutrients include encouragement, enthusiasm and lightning quick email responsiveness. How fast, you ask?
It's faster than table tennis. 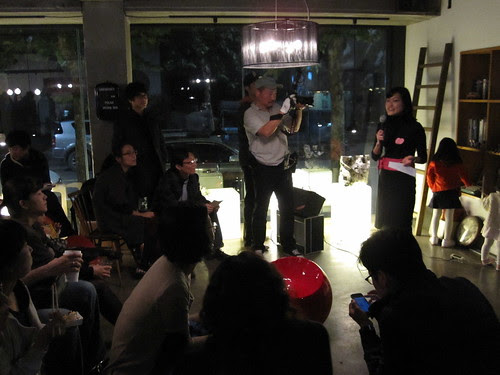 Getting everyone together  is a good thing, because a lot of the English language bloggers in Korea are saying some pretty thoughtful stuff online. Stuff that is generally more useful than what I post about, which is mainly composed of trivial observations and the occasional witty quip (<< hey, that sounds like a spoonerism).
By bringing all of the voices together, we stand a better chance of getting noticed by a wider audience and get to know each other better in person. 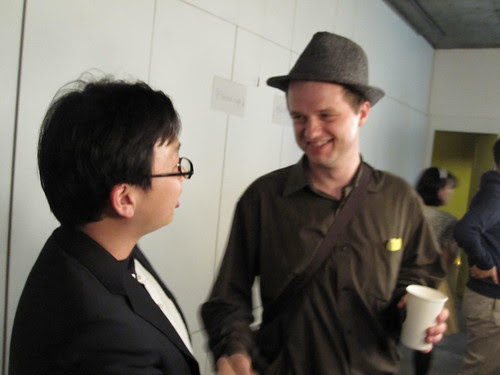 Take for example, my new best friend Roboseyo. Roboseyo and I have exchanged the odd subtle greeting online before, and sent a couple of sideways cyber nods to each other. But after we poured each other makkeoli at the Nanoomi party, it's a whole different ball game. Soon afterwards, Roboseyo explicitly referred to me on his blog, sending quite a few hits this way and perhaps a couple of quality readers.
And that's what the satisfaction of blogging is all about: getting good readers who like what you're doing. 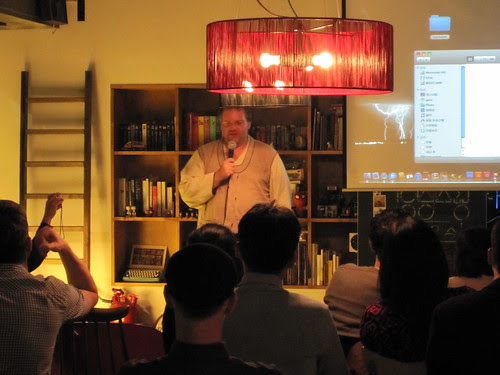 And here's the biggest name in K-blogging, Mr Marmot himself. Both he and Matt from Popular Gusts are extremely interesting to talk to. You don't even need to squeeze them for information. They're literally full to the brim with interesting factoids about Korea in general, and all you have to do is stand around and absorb the overflow.
I consumed as much knowledge as I could, with my makkeoli. 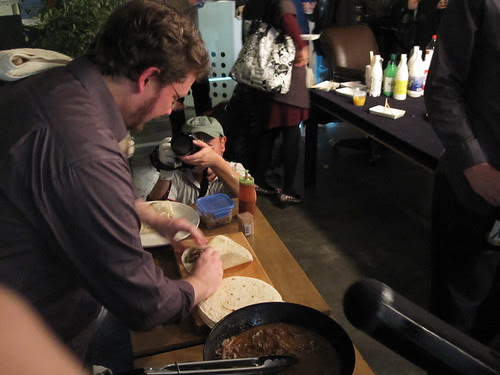 Joe from ZenKimchi was also there, another person I've exchanged cyber-pleasantries with before, but never met in person. Joe made some pretty good bulgogi burritos, directly leading to the ingestion of multiple 'meat kilograms' by the audience. I can't really think of a better unit of consumption. 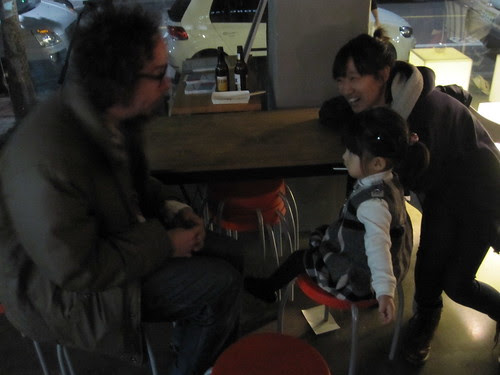 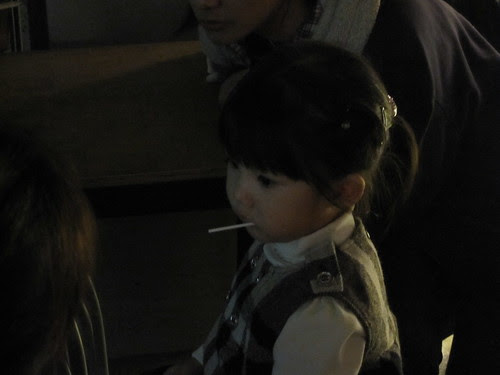 In the top photo is Paul Ajossi and his companion, who entertained the youngsters with some impromptu magic. I've had the odd trip over to Paul Ajossi's website before, but now I can say I've seen him speak Korean and pull foam balls out of thin air.
The reaction from the young audience was hilarious. At first looking dazed and confused, they eventually figured out the concept of magic and started clapping.
To a toddler, I guess the whole world seems like magic, so it's hard to make the distinction. 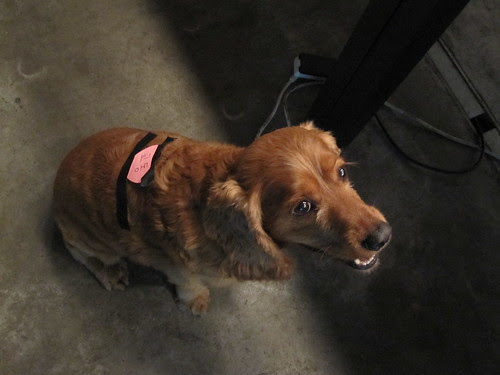 This dog's name is Gyodong. I'm sure it means something, as most Korean names do. The thing I like about Gyodong is that his ears are very similar to flannelette napkins.
Which is handy, if you've been eating a lot of juicy bulgogi burritos. 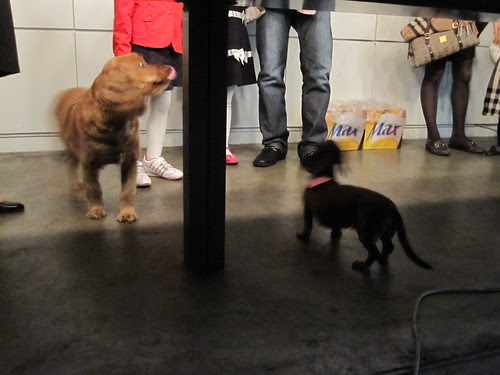 Both Gyodong and the other dog, who I'll just call 소세지, were on floor patrol that evening. Despite my numerous attempts to befriend them, it seemed that the importance of falling food far outweighed any potential meet and greet. 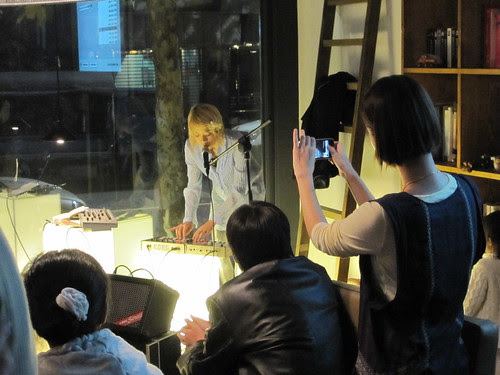 Then Pika came and did a live show. I don't know who Pika is, but the music was ambient and blended with the atmosphere perfectly. 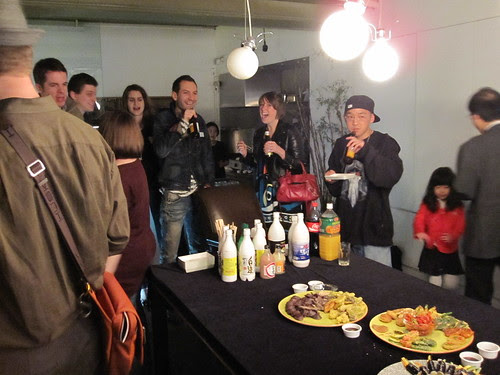 Overall I'd say the Nanoomi function was a roaring success by any measure. The company was interesting, the atmosphere lively and the makkeoli consumed to the last drop. Even the obscure tumeric flavoured one.
It was also nice to see Widhi again, as well as put names to faces: Stafford (Chosun Bimbo), Jennifer (FatManSeoul), Michael (Metropolitician), Dan (Seoul Eats), the KT Lit guy and a friendly Swedish girl from Indieful ROK. For those who I've missed, I look forward to meeting you at the next function.
Keep up the good work Nanoomi!
Posted by Lee Farrand at 11:00 pm

Email ThisBlogThis!Share to TwitterShare to FacebookShare to Pinterest
Labels: Nanoomi

I've been contemplating sending an email over to the nanoomi folks and trying to become a blogger for them too. But I just don't get the website. It's supposed to be sharing between the expat blogosphere and the Korean blogosphere, but I haven't seen any k-blogs up there and I don't see any indication of who, or how or where the blogs in English are being translated to. All it really looks like to me is a compilation of some expat blogs... and there are already enough of those out there.

Am I missing something? Would you say it's worth your time?

It looks like fun. They should hold the next one in Hawaii.

I have met up with a few of the bloggers and some of their commenters (including a few even before they had ever started their blogs). There used to be an informal gathering of sorts on Friday nights at a place that's now closed. I know Marmot from there.

I have an open invitation to any blogger I know to meet up in Hawaii and have coffee or other beverage if they are passing through. It might even include airport pickup, depending on schedule.

Hi Jo. Nanoomi is great. I don't get it entirely either. But there's enthusiasm there. If I were a moth, enthusiasm would be the lightbulb whose warm glow always manages to grab my attention.

That's kind of what I was thinking. Everyone is all excited about this thing, but, so far, I haven't seen anything special about it except putting lots of expat k-bloggers on one site... which is already done by worknplay, korea blog list, etc etc...